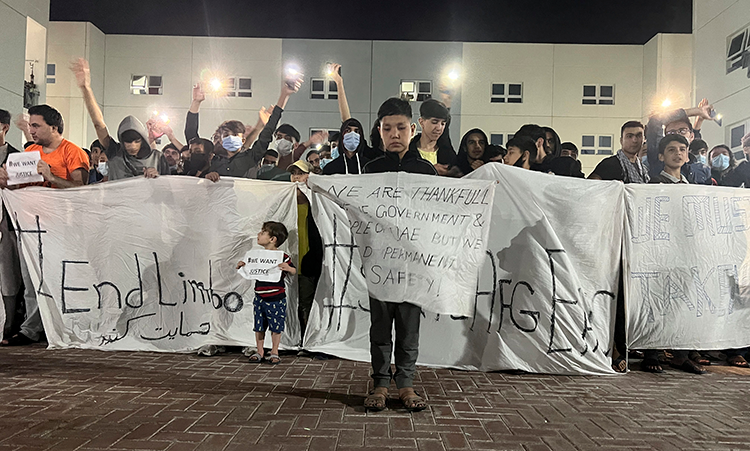 Afghan refugees in the Emirates Humanitarian City held a protest in mid-February to draw attention to their plight. An Afghan boy holds a sign thanking the people and government of the United Arab Emirates but asking for permanent safety. Photo by Sayed Najafizada/NurPhoto via the Associated Press.

These legal professionals had no idea if they would make it to the United States or another final destination. Along with thousands of other Afghan evacuees, they remain in limbo in Emirates Humanitarian City, a temporary camp in the capital city, Abu Dhabi, managed by the UAE government. 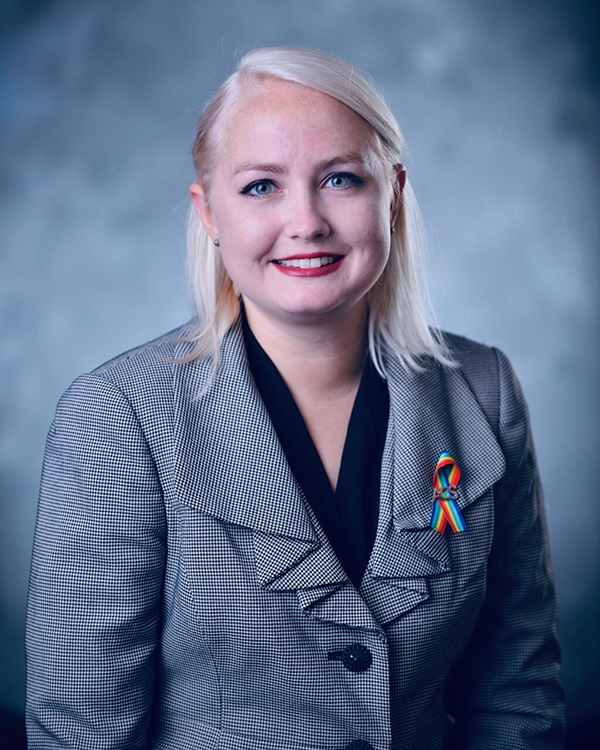 Jordan Jones is one of the volunteer attorneys recruited by the ABA Afghanistan Response Project.

After arriving on U.S. and UAE evacuation planes—as well as aircraft chartered by nongovernmental organizations and private entities—these evacuees were finally safe, but they had little to no access to immigration services.

“You have entire families who don’t have freedom of movement,” says Jones, the director of legal affairs at the Humanitarian Legal Assistance Project in Washington, D.C. “They can’t go outside. They are in a camp in the desert. It’s a horrible situation.

“These are people who are professionals and risked their lives to help the U.S., or believed in the promise of the U.S.,” she continued. “A lot of women I work with spoke out against the Taliban and hardcore sharia law, actively spoke out about gender equality, and now they are being persecuted because of it. They have fled to the UAE and other countries, and now they’re stuck there without further legal help to represent them.”

David Dettman, the outreach and communications director for the ABA Center for Global Programs, coordinates the association’s Afghanistan Response Project. He has recruited volunteer attorneys like Jones to help Afghans move on from the Emirates Humanitarian City and into welcoming jurisdictions.

Dettman led the ABA’s trip to the UAE in March to lay the groundwork for this new initiative. He and other association staff members worked to set up an intake process to screen Afghan evacuees; determine which countries would be the best fit for their families; and match them with pro bono attorneys in those countries.

They also developed a relationship with New York University Abu Dhabi, which provided office space so Jones and fellow pro bono attorney Hillary Kipnis could conduct virtual meetings with clients who were unable to meet in person inside Emirates Humanitarian City. In the future, students there will serve as on-the-ground assistants for remote attorneys.

Dettman says they helped a couple dozen families—in total, about 250 Afghans—by beginning the process of evaluating their chances of moving to the United States. Their options include applying for humanitarian parole, or if they previously worked for the U.S. government, special immigrant visas.

“Prior to our trip, only a small percentage of the people at EHC knew anything about their status,” Dettman says. “These are lawyers and judges and prosecutors and professionals, and many of them said, ‘We understand how complex and difficult this is, but at least you’ve given us hope.’”

The next step for the Afghanistan Response Project is to create a coalition of organizations interested in helping more Afghan evacuees secure onward movement, Dettman says. It is prioritizing those evacuees located in Emirates Humanitarian City, but plan to replicate their program in other places around the world. 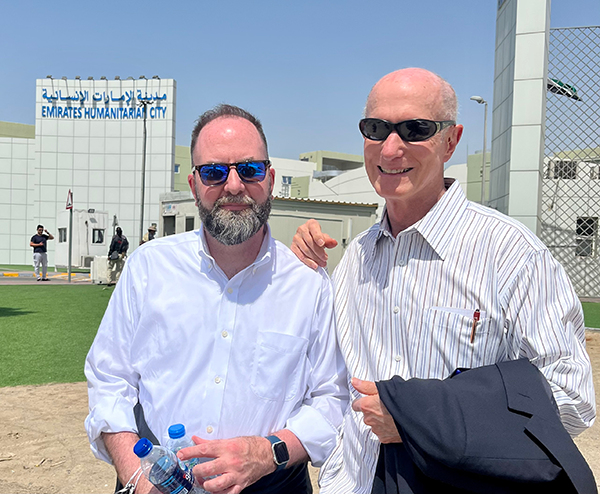 David Dettman (left) and Tom Susman outside the Emirates Humanitarian City in Abu Dhabi during their March visit. Photo courtesy of the Afghanistan Response Project.

Dettman adds that they also need more pro bono attorneys to get involved in the initiative.

“The ABA has a long history of engagement on immigration, refugee, asylum issues,” Susman says. “And so, when this magnitude of a challenge hit with the August evacuation from Afghanistan, I don’t think there was any question that the ABA needed to stand up and try to be of assistance.

“The only question was, ‘What do we do best?’ And providing legal assistance is what we do best.”