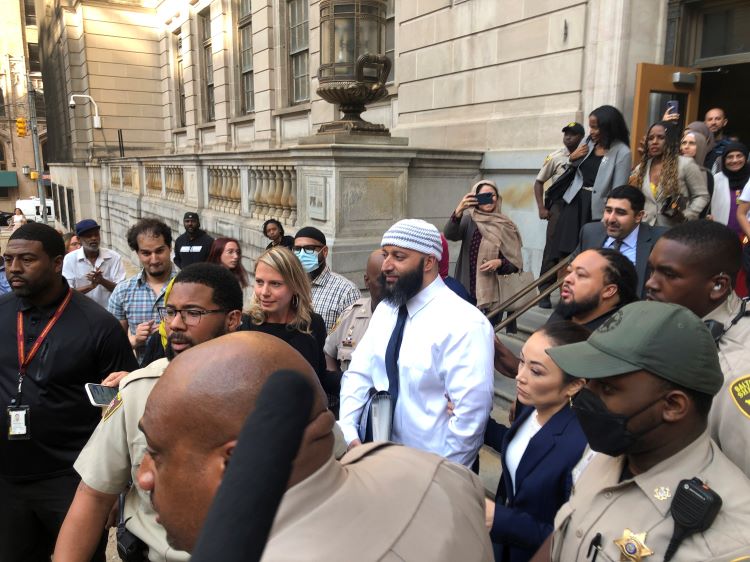 Adnan Syed, center, leaves the courthouse Sept. 19 in Baltimore. A judge ordered the release of Syed after overturning his conviction for a 1999 murder that was chronicled in the Serial podcast. Photo by Brian Witte/The Associated Press.

In a press conference carried live by the Baltimore Sun, Mosby said her decision was based on DNA testing of the victim’s shoes, which had never been tested before. The tests found a “mixture of multiple contributors” to the DNA, Mosby said.

“Most compellingly,” Mosby said, “Adnan Syed, his DNA was excluded.”

Mosby described the genetic material as “touch DNA,” which is derived from skin cells left behind at the crime scene. Advances in DNA testing made it possible to extract DNA from the shoes, she said.

Syed has been imprisoned for 23 years. He was convicted in February 2000 for killing his former girlfriend, 18-year-old Hae Min Lee, in January 1999.

Judge Melissa M. Phinn of Baltimore had vacated Syed’s murder conviction last month, after Baltimore prosecutors said the defense was never given information about two “alternative suspects.” Prosecutors were awaiting the DNA test results before deciding whether to pursue a new trial.

Mosby said her administration wasn’t responsible for Syed’s wrongful conviction, but it was her responsibility to acknowledge it and apologize to the families of Syed and Lee. Mosby said she would not disclose anything else about the case at this time because of the open investigation.

“Today, tomorrow and until my administration ends, we will continue to utilize every available resource to prosecute whoever is responsible for the death of Hae Min Lee,” Mosby said.

“Finally, Adnan Syed is able to live as a free man,” said Syed’s lawyer, Erica Suter, in the press release. “The DNA results confirmed what we have already known and what underlies all of the current proceedings: that Adnan is innocent and lost 23 years of his life serving time for a crime he did not commit.”

Suter is an assistant public defender and director of the Innocence Project Clinic at the University of Baltimore School of Law.

The Baltimore Sun, the Washington Post, the New York Times and CNN are among the publications with coverage of Mosby’s decision.

Lee’s family has filed an appeal of last month’s order vacating the conviction, according to the Washington Post. They allege that they didn’t receive adequate notice of last month’s hearing, the Baltimore Sun reports.

On Wednesday, a Maryland appeals court refused to interfere in the decision to vacate the conviction. The Maryland Court of Special Appeals also ordered lawyers for Lee’s family to submit arguments on why the appeal isn’t moot following the prosecution’s decision to drop charges, the Associated Press reports.

Prosecutors not disclose the identity of the two alternative suspects in their Sept. 15 motion to vacate the conviction. They said one of the alternative suspects had threatened to kill Lee and make her “disappear.” One was later convicted for attacking a woman in her vehicle “without provocation or excuse.” And one was later convicted for “multiple instances of rape and sexual assault of compromised or vulnerable victims.”

Prosecutors also cited expert opinion about the unreliability of cellphone location evidence used at trial and inconsistent statements made by the main witness in the case.