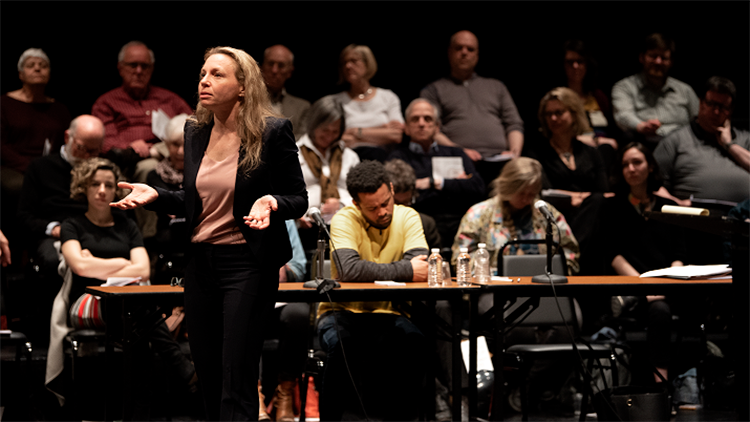 “Ladies and gentlemen, something is rotten in the county of Cook, and it is the prosecution’s case,” Marc Kadish declared during closing arguments in the trial of Hamlet, who was accused of killing his girlfriend Ophelia’s father, Polonius.

The jury was convinced and found his client not guilty in the final performance of Please, Continue (Hamlet), a play starring actual trial judges, public defenders and prosecutors in the roles of the court officials. Written and directed by Yan Duyvendak and Roger Bernat, it was performed April 25-28 in Chicago at the Museum of Contemporary Art.

The play has been performed hundreds of times in countries around the world “with wildly varying verdicts, drawing attention to the theatrical nature of justice systems and raising the specter of subjectivity in our ostensibly most objective institution,” according to the MCA’s website.

“I’ve been a lawyer for over 50 years now, and this is the first time I got to see the same set of facts and how four different sets of lawyers viewed them, what they emphasized, what their strategy was, as well as how individual judges performed, how they viewed the evidence and how they viewed their roles,” says Kadish, the pro bono adviser at Mayer Brown.

In the first performance, the jury—a group of 12 audience members selected at random after closing arguments—found Hamlet not guilty. In the second, a mistrial was declared due to a hung jury, and in the third, Hamlet was found guilty of involuntary manslaughter. He was never found guilty of murder.

Judge Joan Lefkow of the U.S. District Court for the Northern District of Illinois presided over Hamlet’s first trial and says the outcomes seemed to depend on the representation.

“Our night, I must say the prosecution was quite weak,” she says. “It was pretty clear it was going to be not guilty. I don’t want to go into assessing the quality of the counsel, but the defense counsel, Dena Singer, she was terrific.”

Cook County State’s Attorney Kim Foxx was scheduled to serve as the prosecutor in that performance but left after she gave the opening statement. Loukas Kalliantasis, an assistant state’s attorney for Cook County, took over.

Lefkow was also surprised by the actors—who had to respond to the attorneys and the judge in the way they thought their characters would in a real murder trial—and how they impacted the jury.

While Hamlet had the right to remain silent, he chose to testify during her trial. In a dramatic display, Lefkow says he got emotional and threw himself down to his knees on the floor. 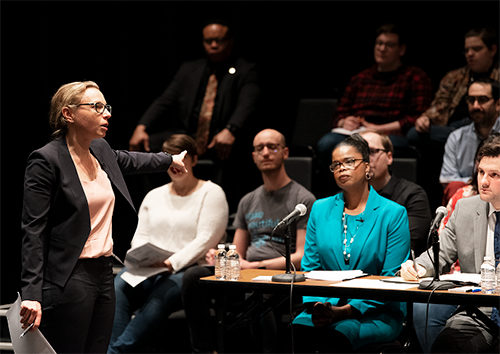 “I had to tell him to compose himself,” she says. “It took him a while to really get his act together. Backstage, I asked him about it, and he said he didn’t expect to do that, but he got into the feeling of what it would be like to be charged with murder. It was fascinating.”

Kadish, who also served as co-counsel for Hamlet in the second performance, points out that the attorneys operated under certain constraints.

The defense was limited to Hamlet’s claim that he thought it was a rat, and not Polonius, that he was stabbing behind the curtain, he says. The prosecution’s position was that Hamlet was lying, and a medical examiner was on hand to back up the claim that he used more force than necessary to kill a rat.

“That added an air of reality to it, but you might have thought the defense strategy would at least investigate Hamlet’s state of mind for insanity, or whether or not he killed in a heat of passion, which under Illinois law would be second-degree murder,” Kadish says. “But after all, it was a play, and these are actors.”

Kadish was involved even earlier in the play’s process. Through former Mayer Brown lawyer Gretchen Helfrich, he was recommended to Alison Cuddy, the artistic director of the Chicago Humanities Festival, which co-presented Please, Continue (Hamlet).

Cuddy was looking for someone to rewrite the pretrial materials, Kadish says. They had last been used in Australia and needed to be revised to reflect a Chicago criminal investigation and Cook County indictment and trial.

“I felt committed since I had rewritten all of the materials and had to spend at least a month doing it and Skyping back and forth with Yan,” he says.

Kadish also suggested other Chicago-area judges and attorneys for the play. In addition to Lefkow, Foxx, Kalliantasis and Singer, a founding partner of Bedi & Singer, performers included:

Lefkow had never acted before—other than in mock trials with students—but says she enjoyed the experience and would participate in the future.

Kadish, who also had no previous acting experience, agreed. After working closely with Duyvendak, and even inviting the director to stay at his home during the performances, Kadish is now helping him bring the play to other cities, including Hong Kong.

“I am going to email two partners at our Hong Kong office who I am acquainted with to ask them if they can make some suggestions or would be willing to be involved themselves,” he says.

The pretrial materials and program notes for Please, Continue (Hamlet) are available on the MCA website.