Claiming to have 4.3 trillion readers, the Onion supports parodist and its writers' paychecks in SCOTUS brief 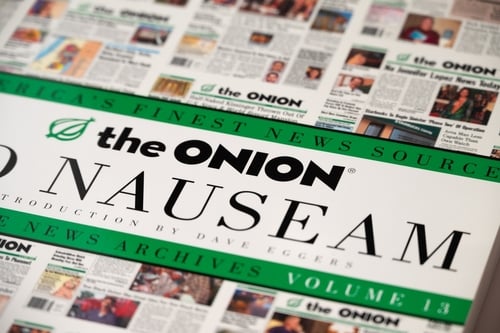 A cover of the Onion parody news publisher. Image from Shutterstock.

Updated: The satirical website the Onion deems itself to be “the single most powerful and influential organization in human history” in an amicus brief urging the U.S. Supreme Court to hear the case of an Ohio man who was prosecuted for creating a parody Facebook page for the local police department.

The Onion brief supports Anthony Novak, who lost his lawsuit against Parma, Ohio’s police department when the 6th U.S. Circuit Court of Appeals at Cincinnati ruled that police had qualified immunity from his constitutional claims.

“The Onion cannot stand idly by in the face of a ruling that threatens to disembowel a form of rhetoric that has existed for millennia, that is particularly potent in the realm of political debate, and that, purely incidentally, forms the basis of the Onion’s writers’ paychecks,” the amicus brief says.

“The petition for certiorari should be granted, the rights of the people vindicated, and various historical wrongs remedied. The Onion would welcome any one of the three, particularly the first.”

The brief argues that a satire works best when told with a straight face—and that means that Novak didn’t have to include a disclaimer on his fake Facebook page for the Parma, Ohio, police department. The page, which was up for 12 hours, claimed that the department was offering free abortions in a police van and was hosting a “pedophile reform event” with a “no means no” learning station.

About a dozen people called police about the page, including some who wanted to know whether it was real. Police then posted a warning about the fake page on the department’s website, which Novak copied onto his fake Facebook page.

After learning Novak’s identity through a Facebook search warrant, police arrested Novak, who spent four days in jail before making bond. He was later acquitted on a charge of disrupting police functions.

Novak sued for violation of his First and Fourth Amendment rights. The 6th Circuit ruled against Novak in April.

Novak is represented by the Institute for Justice, according to a Sept. 27 press release. Its cert petition asks the Supreme Court to decide whether government officials are entitled to qualified immunity when they arrest someone based purely on speech. The Institute for Justice argues that the Supreme Court should do away with qualified immunity altogether.

The Onion brief argues that a parody has to plausibly mimic the original to work. The brief cites instances in which its parody was taken as reality, as when:

• A Republican congressman thought that he had to warn his constituents about the abortion-rights movement after reading a headline by the Onion titled: “Planned Parenthood Opens $8 Billion Abortionplex.”

The brief also says its headlines have forecast future events and provides this 2017 headline as an example: “Mar-a-Lago Assistant Manager Wondering If Anyone Coming to Collect Nuclear Briefcase From Lost and Found.”

The brief began with a tongue-in-cheek description of the Onion, complete with claims that it has “a daily readership of 4.3 trillion,” and that it supports “more than 350,000 full- and part-time journalism jobs in its numerous news bureaus and manual labor camps stationed around the world.” The brief also asserts that the publication “owns and operates the majority of the world’s transoceanic shipping lanes.”

“The Onion intends to continue its socially valuable role bringing the disinfectant of sunlight into the halls of power,” the brief says. “And it would vastly prefer that sunlight not to be measured out to its writers in 15-minute increments in an exercise yard.”

But Mike Gillis, head writer for the Onion, wrote much of the brief, NPR reports. Gillis told the publication that he wrote most of the arguments and jokes, and then the lawyers added legal precedent and historical context in “an extremely collaborative process.”

Hat tip to Bloomberg Law, CNN and the Associated Press which had coverage of the brief.

Updated Oct. 5 at 8:45 a.m. to add information on Mike Gillis, the Onion writer who wrote much of the brief.