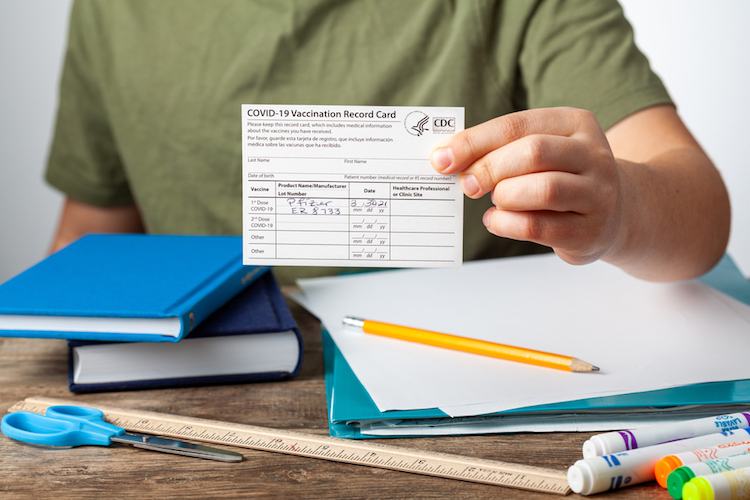 Although Food and Drug Administration authorization for emergency use of the COVID-19 vaccine for children under 12 may be here soon, lawyers say it’s unlikely all states will add the inoculations to school immunization requirements, even if existing caselaw supports it.

The reason given is politics. Lawyers interviewed by the ABA Journal disagree on whether requiring the vaccines is the best approach for keeping children in schools, but most agree the virus has caused significant work for school administrators, many of whom are still dealing with pushback on masking rules.

The FDA in May allowed emergency use of Pfizer’s vaccine for children 12 years of age and older. Lawrence Gostin, a professor at Georgetown Law whose work centers on public health law, predicts the agency will do something similar for children between the ages of 5 and 12 by the end of the year.

In California, Gov. Gavin Newsom recently announced his state would be the first to mandate COVID-19 vaccines as a condition of in-person school attendance, once FDA approval is given for corresponding grade spans. The news release breaks the grades into seventh through 12th grade, which represents an age group for which the vaccine is allowed for emergency use; and kindergarten through sixth grade, which is largely comprised of children in an age range that does not yet have FDA authorization for the vaccine.

Any vaccine the California Department of Public Health adds to required school immunizations needs to have a personal belief exemption unless the legislature removes it, says Dorit Reiss, a professor at University of California Hastings College of Law whose research focuses on legal and policy issues related to vaccines. That happened in 2015, after a measles outbreak was traced to Disneyland, she says, adding that the 2015 repeal does not apply to new vaccines.

A state website reports that as of Oct. 19, 72.1% of California residents are fully vaccinated against COVID-19. The state reported a 1.9% positive test rate for the virus over the past eight weeks.

Meanwhile, in Tennessee, an order by Gov. Bill Lee gives parents the ability to opt their children out of mask mandates put in place by schools or health boards. In September, parents filed a federal lawsuit on behalf of school-age children with disabilities that argues the governor’s order violates the Americans with Disabilities Act by putting youths who are medically vulnerable at risk. Texas Gov. Greg Abbott issued a similar order in July.

According to the Tennessee Department of Health website, as of Oct. 18, 47.9% of state residents are fully vaccinated. The state’s positive test rate, shared Oct. 13, was 11.2%.

In Texas, its department of state health services website reports that 63.31% of the population are fully vaccinated. The state breaks down COVID-19 test results by test type. As of Oct 18, the positivity rate on molecular tests was 6.4%, and 2.98% on antigen tests.

There’s a very small percentage of people who seek religious accommodations for school vaccines, according to Roger Severino, who was director of the U.S. Department of Health and Human Services’ Office for Civil Rights during the Trump administration. He thinks schools in states that add the COVID-19 vaccine to required immunizations will lose students to home schooling.

“Kids’ education is more important than a small risk that can be mitigated with protective measures,” says Severino, who now works as a senior fellow and director of the HHS Accountability Project at the Ethics & Public Policy Center, an organization that describes itself as working to apply the Judeo-Christian tradition to contemporary legal questions.

Others say adding the COVID-19 vaccine to required school immunizations might prevent school districts, particularly larger ones, from returning to remote learning in the event of more outbreaks.

“It could ensure we can stay in school and not overtax hospitals,” says Ruquaiijah Yearby, a Saint Louis University School of Law professor whose academic work focuses on health care regulation. But she adds that outside of vaccines, courts tend to defer to freedom of religion arguments.

Two federal appellate courts recently addressed vaccine mandates for college students. On Aug. 2, the Chicago-based 7th U.S. Circuit Court of Appeals found that an Indiana University requirement that students have the COVID-19 vaccine did not violate their constitutional rights, under the 1905 U.S. Supreme Court vaccine case Jacobson v. Massachusetts. The university does grant religious and medical exemptions for the vaccine, and students with exemptions had to wear masks and test twice a week.

Meanwhile, the Cincinnati-based 6th U.S. Circuit Court of Appeals in October found that the rights of student athletes were violated when Western Michigan University denied them religious exemptions from a vaccine mandate.

“Blue states” will likely add the COVID-19 vaccine to required school immunizations once FDA approval is given, Gostin says.

He adds that Jacobson v. Massachusetts has been reaffirmed “hundreds of times,” but it’s possible the Supreme Court could modify its doctrine. The case challenged a Massachusetts law that allowed cities to require residents get the smallpox vaccine. The court found the regulation was a legitimate exercise of state police power to protect public health and safety.

Some lawyers say “soft mandates,” rather than plans like the one announced in California, might be the better approach. That could be something like prohibiting unvaccinated children from going on field trips or participating in school sports, Reiss says.

“In an ideal world, we’d be saying children who are vaccinated don’t have to social distance. Hopefully we can say that after the delta variant passes,” she adds.

In Illinois, parents from 145 school districts filed a state court class action suit against their districts, Gov. J.B. Pritzker, the state education superintendent and the state director of public health regarding an executive order requiring masks for indoor education. The action was filed Oct. 20, the Belleville News-Democrat reports.

People who live in northern Illinois, as well as Chicago and its northern suburbs, would likely support adding the COVID-19 vaccine to school immunization requirements, but there would be less support in the southern part of the state, says Laura Knittle, a Chicago partner with Hinshaw & Culbertson who represents school districts.

Nashville lawyer Charles Cagle represents a school district named as defendant in the Tennessee ADA action. He says administrators there are considering split days, where children who are vaccinated would attend one session, and those who are not go to the other.

The Lewis Thomason partner doesn’t see Tennessee adding the COVID-19 vaccine to required school immunizations in the near future, in part because there’s still a significant amount of discourse at his clients’ school board meetings when they discuss masking.

“We haven’t had the discussion so far, because vaccines for younger children are not available. If it ever becomes available, I imagine there will be a fair number of folks on both sides of the issue.”

Updated Oct. 21 at 1:42 p.m. to add information about the Illinois class action suit.