LA district attorney's past drives his push forward for reform

Incoming Los Angeles County District Attorney George Gascón is sworn in as his wife, Fabiola Kramsky, holds a copy of the Constitution during a mostly virtual ceremony in Los Angeles on Dec. 7, 2020. Photo by Bryan Chan/County of Los Angeles via the Associated Press.

Los Angeles District Attorney George Gascón knows how to cope with controversy. He faced it as police chief in Mesa, Arizona, when he clashed with Sheriff Joe Arpaio and his hardline immigration policies. And as San Francisco’s top prosecutor, he riled law enforcement groups after pushing for a host of reforms.

Even so, more than seven months into Gascón’s new job as LA’s top prosecutor, resistance to his policies has reached dizzying peaks. Since beating the incumbent district attorney, Jackie Lacey, in the November 2020 general election, the 67-year-old faces a court challenge from the union that represents his own prosecutors and a recall effort that is gaining steam. With the national push for reform and rising gun violence and homicides in the foreground, advocates are watching closely to see how the high-stakes battle plays out.

Gascón wasted no time shaking things up. Soon after his December 7 swearing in, he announced sweeping directives to reduce prison terms, including thousands of old cases involving murder and other violent crimes as well as reforms to end cash bail and the death penalty. His stance as the “godfather of progressive prosecutors” has pleased activists who are among the 2 million-plus voters who chose him to head the largest district attorney’s office in the nation.

But the victims’ families leading the recall effort say Gascón is abusing the powers of his office. Desiree Andrade, a campaign organizer and spokesman for the Recall George Gascón campaign, is a registered Democrat. Andrade’s son Julian, then 20, was kidnapped then tortured and murdered in 2018. She says because of Gascón’s policies, her son’s killers will be eligible for parole rather than facing life in prison.

“You, George Gascón, have put criminals before victims. I truly believe you have confused your role as a district attorney and a public defender,” Andrade said at a May press conference to formally start a signature-gathering effort that has a long shot chance of leading to a recall election in 2022.

Los Angeles County Sheriff Alex Villanueva is one high-profile politician who joined the recall effort by adding his name to the petitions. The campaign will need 597,000 verified signatures by October for a recall election. Meanwhile, more than two dozen cities in California have given Gascón a vote of no confidence.

Amid the recall effort and the lawsuit, Gascón remains unfazed. He blames the pushback on old ways of thinking about the criminal justice system, particularly among prosecutors within his own office.

“They are addicted to high levels of incarceration and punishment,” Gascón says of the staff members who oppose his reforms. “They view themselves as the thin line between chaos and safety, and they think the best way they can help the community is by being punitive in their approach.”

Fox News anchors and primetime host Tucker Carlson are among the pundits who have weighed in on Gascón’s reforms, arguing they go too far. In March, one of Gascón’s own prosecutors, Jon Hatami, who leads a child abuse unit in the DA’s office, took the district attorney to task on the popular cable show Fox & Friends.

“We now have a district attorney who is pro-criminal, anti-victim and who refuses to follow the law,” Hatami said. 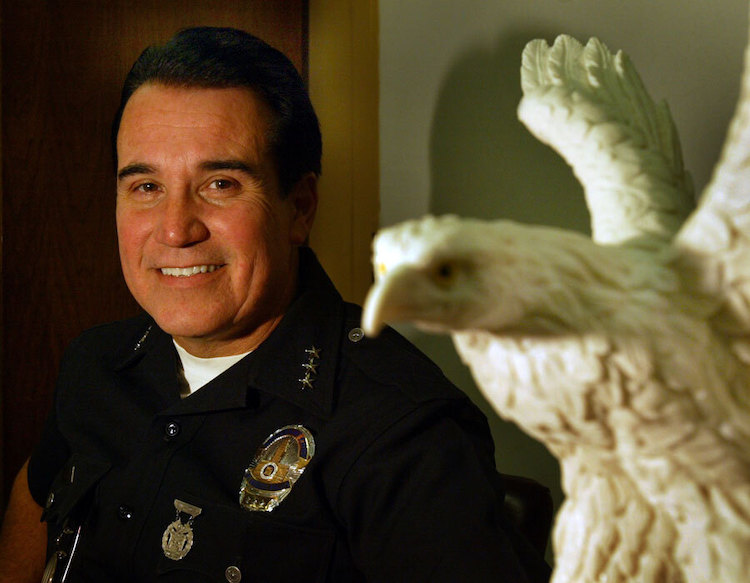 In the spotlight, and crosshairs

Gascón was born in 1954 in the Santo Suarez neighborhood of Havana, Cuba. When he was 13, he fled with his family from Fidel Castro’s communist government. They settled in Cudahy, a southeastern suburb of Los Angeles. Gascón’s early dealings with the police in Cuba and the Los Angeles County Sheriff’s Department shaped his view of law enforcement.

“We were usually treated with a great deal of disrespect, and that has impacted the way that I looked at policing,” Gascón says.

With no high school diploma, Gascón joined the Army and then worked in car sales. In the late ’70s, he joined the Los Angeles Police Department. He later became a car dealership sales manager before returning to policing in the late ’80s. He also earned a law degree in the ’90s.

In 2000, Gascón led a training program on constitutional policing for the LAPD after a scandal exposed corruption in a notorious anti-gang unit. He would rise through the ranks of the police department to become assistant police chief.

During his campaign for Los Angeles district attorney, Gascón ran on his record in San Francisco, where he was police chief and then district attorney, succeeding Kamala Harris. He created neighborhood courts to divert low-level offenders from prison. He also co-authored a statewide ballot initiative, the Safe Neighborhoods and Schools Act. After its passage, certain theft and drug possession offenses were reclassified from felonies to misdemeanors.

As he built a reputation as a progressive prosecutor, Gascón ruffled feathers and made enemies. After he stepped down to run for district attorney in LA, San Francisco Mayor London Breed endorsed Jackie Lacey, who was fighting for a third term. “I hear from residents every day who are frustrated by the endless cycle of people getting arrested for dealing drugs, or breaking into cars, only to be released back out on the streets,” Breed said in October 2019 as she announced Gascón’s replacement, interim DA Suzy Loftus.

Some activists even questioned Gascón’s status as a reform-minded prosecutor, arguing he should have held police accountable for several shootings.

Even so, after winning last year’s election, Gascón was quick to push through reforms. After he was sworn in, he announced his office would no longer pursue death penalty cases or charge juveniles as adults. He also ended cash bail for people charged with misdemeanors and other nonviolent crimes.

Miriam Krinsky, executive director of Fair and Just Prosecution and a former federal prosecutor who worked in Los Angeles, has known Gascón since his time as San Francisco District Attorney and supports his reforms. She says resistance from some prosecutors stems from thinking that belongs to a different tough-on-crime era.

“I think it’s unfortunate that they don’t recognize that times have changed, that communities don’t believe we should try to incarcerate our way out of poverty or mental illness and that decades-long sentences are not the vision of justice the LA community wants,” Krinsky says.

It was Gascón’s decision to end sentencing enhancements that perhaps proved most controversial. He argued the enhancements, sometimes for using a gun duing the commission of a crime or for gang membership, led to excessive prison sentences, increased recidivism and burdened people of color and the mentally ill.

The Association of Deputy District Attorneys for Los Angeles County, the union that represents hundreds of Gascón’s line prosecutors, filed a lawsuit in late December to block his reforms. They claimed the directives violated state law and would force prosecutors to flout their legal and ethical duties to uphold the law.

The directives would have dismissed mandatory sentencing enhancements in thousands of criminal cases, including those for previous felony convictions under California’s “three strikes” law. In February, LA County Superior Court Judge James C. Chalfant barred Gascón from enacting most of the changes. Gascón, who recently enlisted former U.S. Solicitor General Neal Katyal to help with his appeal, responded in several posts on Twitter:

“I never had any illusions as to the difficulty and challenges associated with reforming a dated institution steeped in systemic racism,” Gascón wrote. “My directives are a product of the will of the people, including survivors of crime, and a substantial body of research that shows this modern approach will advance community safety.”

The challenge for Gascón is more acute, Krinsky says, because civil service protections prevent him from making far-reaching personnel changes. Many district attorneys have the power to reshape the office to match their vision. After taking office in 2018, Philadelphia District Attorney Larry Krasner fired 31 prosecutors, sending a clear message to those who stayed in their posts, the Los Angeles Times Editorial Board noted in an op-ed about the gravity of the task Gascón faces. 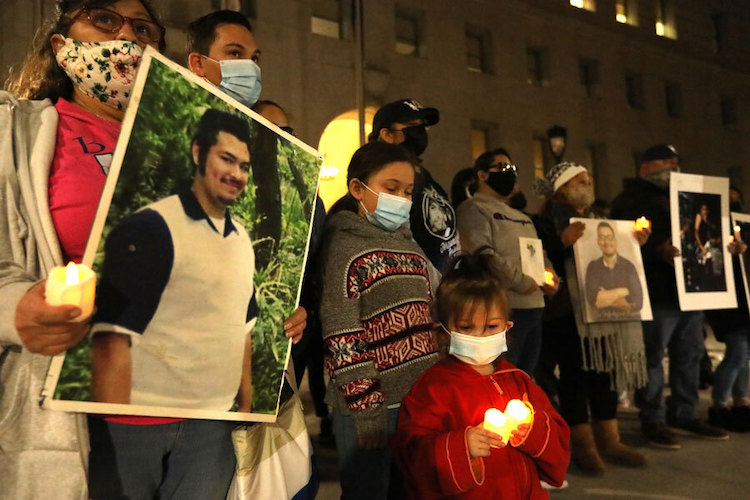 From left: Mary Smay, holding a photo of her murdered son Juan Vidal, stands next to her son Anthony Rivera and Rivera’s daughters, who joined other family and community members at a candlelight vigil for victims of a violent crime and to ensure access to justice at the Hall of Justice in Los Angeles on Dec. 31, 2020. Vidal was murdered Oct. 21, 2016. Family members were demanding fair access to justice from newly elected District Attorney Gascón. Photo by Genaro Molina/The Los Angeles Times via Getty Images.

Chesa Boudin, who succeeded Gascón as the elected San Francisco district attorney, says it will take time for Gascón to instill his philosophy and ideas. It will depend on staff turnover and how quickly he can win over those who remain, Boudin believes. All the same, he says Gascón knew what he was getting into and has the temperament to succeed.

“Change is hard,” Boudin says. “One of the defining aspects of George is that he is open-minded.”

Although changing the culture in his office is an uphill battle, Gascón says his career has prepared him. He sees parallels to his time as Mesa police chief in Arizona when he became an outspoken critic of Sheriff Arpaio, who made a national name for himself for his tough treatment of undocumented immigrants. Gascón opposed immigration raids and roundups in Mesa and in 2008 told the Phoenix New Times that an anonymous note had been sent to his home: “We know where you live,” the note said.

“It put a target on my back,” Gascón says of his time in Mesa. “Now in LA, talking about criminal justice reform and trying to bring police accountability, the same tactics that were used by the Arpaio supporters—trying to vilify, trying to accuse you of being soft on crime—are the same.”

But Michele Hanisee, president of the Association of Deputy District Attorneys, says Gascón should be doing more to work with the lawyers on his team. According to Hanisee, there are about 900 prosecutors in the office, and the vast majority are opposed to his policies.

“If he continues to set policy without consulting with and collaborating with the vast number of subject matter experts in this office and continues to rely on people with no significant experience in the criminal justice system, he is going to face resistance,” Hanisee says.

She claims the idea of an “old guard” backlash is a “false narrative.” She notes the union supported the previous district attorney’s cash bail reforms and diversion programs for the mentally ill.

“The prosecutors in my office are diverse, and they are interested in any improvement to the criminal justice system,” Hanisee says.

Former district attorney Steve Cooley, a Republican, resists the notion that Gascón is facing pushback only from conservative media and tough-on-crime prosecutors.

“In Los Angeles County, every single radio talk show host has been very critical of him. Television stations have run numerous stories about his policies and the impact on victims,” Cooley says.

Dan Satterberg, a like-minded prosecuting attorney in King County, Washington, believes Gascón is ready to meet the challenge. He notes that Gascón has faced obstacles from the time he arrived in the United States as an immigrant and in nearly all his jobs since.

“He seems to relish the opportunity to make big sweeping policy changes wherever he goes,” Satterberg says. “He is determined, and he’s been successful in bringing change, and I have to think that this resistance makes him more determined.”