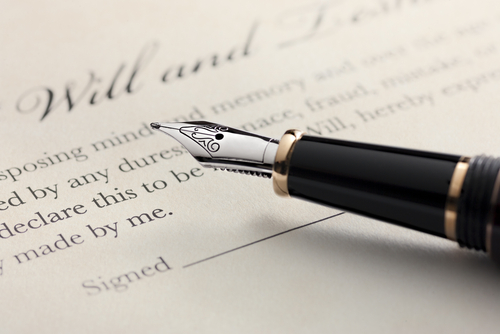 In recent weeks, Rajiv Nagaich has received a lot of calls from clients who are concerned about their estate plans.

Some of them started but never finished their wills or trusts. Others didn’t know where to start but felt it was time to prepare for the future. They all expressed to him the same sense of urgency amid the coronavirus pandemic despite social distancing guidelines that could make completing their documents a challenge.

Nagaich is one of many lawyers across the country now using online video meetings to help senior clients arrange their affairs. This has become increasingly vital as the Centers for Disease Control and Prevention warns that individuals who are age 65 or older and have underlying medical conditions are at higher risk for developing more severe cases of COVID-19.

Each Wednesday, Nagaich and other attorneys in his firm meet virtually with four to six clients who have approved the final versions of their estate plans. They use DocVerify, a cloud-based electronic signature software that also features video chats. The attorney, as well as two witnesses and a notary, talk from the firm’s conference room, while the client sits at home.

Nagaich says although the software requires all parties to authenticate their identities, he and his colleagues also ask clients to show two forms of identification over the camera. They watch as the clients sign their documents electronically and ask for their return so attorneys can sign on their end. They record the entire process in case any questions arise later.

“We are very concerned about guarding against fraud,” Nagaich says. “It is not just about getting documents signed; it is about getting them signed in the most prudent manner.”

State laws vary as to how to properly execute a will or trust. Nevertheless, prior to the pandemic, clients, notaries and witnesses were generally required to be in the same room—or within sight of one another—during the signing of documents. As of mid-April, the majority of states have attempted to overcome this obstacle by issuing emergency orders authorizing the use of remote electronic notarization and/or witnessing.

New York, Illinois and Iowa currently permit both measures, while most states, including Washington, have only addressed remote electronic notarization. The ABA Real Property, Trust and Estate Law Section and the American College of Trust and Estate Counsel are tracking the orders.

Jo-Ann Marzullo, chair of the Real Property, Trust and Estate Law Section, co-signed a letter sent to several governors in March contending both remote electronic notarization and witnessing are needed since wills, health care proxies and other estate planning documents generally require acknowledgement by a notary and two witnesses.

Marzullo, an attorney in the Boston office of Ligris & Associates, explains that governors appoint notaries and either the governor or secretary of state can issue orders that alter how they perform their duties, as long as they don’t contradict any state statutes.

She says many governors, including her own, may not address remote witnessing because their statutes wholly govern that part of the estate planning process. However, she adds, courts in states where governors have authorized the measure may approve those decisions because they were made during a public health emergency.

“If Gov. Baker here in Massachusetts would sign it, I would take it and run with it,” she says.

Marzullo also sent a letter to her state representatives asking that they add remote witnessing to proposed legislation that permits remote electronic notarization during the COVID-19 crisis. If the legislature alters the state statutes to incorporate these practices, she says it could also outline specific standards, such as how to prevent coercion or fraud.

“Part of the reason for physical presence was you were trying to find out if someone was pressuring clients to sign,” Marzullo says. “But if you have someone wiggle around their phone or their iPad and show you the room and then identify everybody, is it really that different from being there in person?”

In late April, Massachusetts adopted a statute allowing for both virtual notarization and witnessing.

Even before the coronavirus, an increasing number of states permitted remote electronic notarization, with 23 passing laws in recent years, according to the National Association of Secretaries of State, which adopted standards for the practice in 2018. Virginia was the first in 2011, followed by Montana, Nevada and Texas.

Amy DeLaney, a certified elder law attorney and founding partner of DeLaney DeLaney & Voorn in Chicago, was a member of an Illinois task force that investigated best practices and standards related to electronic notarization.

She was a representative of the National Academy of Elder Law Attorneys, which she says opposed legislation to allow electronic notarization since much of its work involves recovering assets for individuals who were financially exploited. But now, due to the outbreak of COVID-19, the association has changed its position on the pending proposal.

“We support it because we have many clients in congregate facilities and also health care workers who really want to get their documents done at this time,” DeLaney says. “So the organization took a turn in light of the unusual circumstances and in response to that, a lot of attorneys are doing online document signing.”

DeLaney says her firm has received hundreds of calls from clients and now uses a remote process to help them complete simple wills. Clients fill out an online intake form, and once an attorney drafts their documents, they use Zoom Business to schedule a signing.

During the meeting, which they secure with a password, they ask clients to print and sign the documents, then scan and send them back, she says. Attorneys and staff in the firm serve as their notaries and witnesses.

“We are in the neighborhood of 50 right now that have gone through this process,” DeLaney says. “The demand is out there, and that’s why we are limiting it to simple wills and getting something in place.”

“I have lost several clients to the virus already,” she adds. “One client passed away, but she wasn’t able to get her documents done in time.”

Although some attorneys in Illinois also question whether the governor can issue a proclamation that alters the state’s probate act, DeLaney says it’s likely legislators will consider grandfathering in both remote electronic notarization and witnessing in the fall session.

John Rogers, the owner of Rogers Trust Law in Los Angeles, served as the ABA adviser to the Uniform Law Commission committee that drafted the Uniform Electronic Wills Act. Nevada, Indiana, Arizona and Florida have laws that permit electronic wills, and he expects more to follow as a result of the model act’s passage in 2019.

In considering the advantages, Rogers says it isn’t always convenient for people to be physically present during document signings, especially those done in rural areas. Plus, he adds, much of people’s wealth is already handled via the internet.

“You go online and buy or sell securities by hitting a few buttons and never talk to anyone about doing it,” Rogers says. “You can change your retirement plan beneficiary designation online and many people’s retirement plans are the single largest assets they have.

“So the argument would be, if that’s all true, then why not let these other things be done using technology, too?”

Even though Washington hasn’t explicitly authorized lawyers and witnesses to sign estate planning documents during online video meetings, Nagaich contends that his solution is necessary during the COVID-19 pandemic.

He tells clients that while it is untested and their wills could be challenged after the crisis, he hopes courts would understand the urgent circumstances and uphold them.

“This is the time I am proud to be a lawyer,” Nagaich says. “When all of the things are going wrong, someone has to figure out how can we still have some semblance of normalcy. And lawyers are the ones who can do that.”

Updated May 5 at 10:37 a.m. to clarify Amy DeLaney’s title and add details about Massachusetts’ new statute.