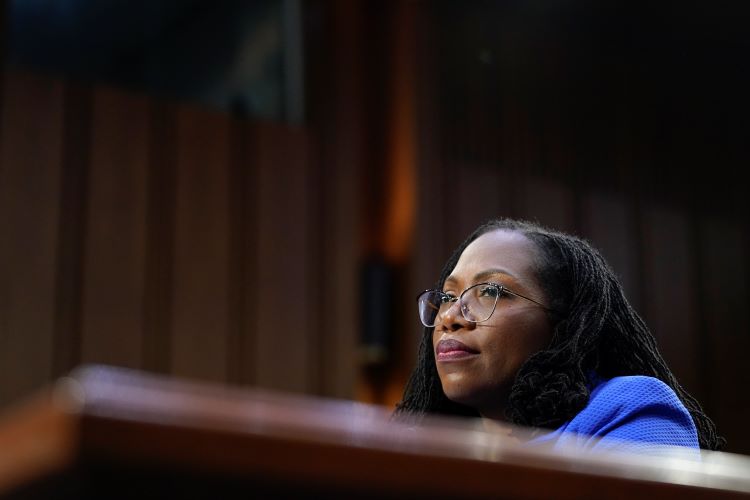 The questioning by Republican Sen. Lindsey Graham of South Carolina on Wednesday of U.S. Supreme Court nominee Judge Ketanji Brown Jackson is getting a lot of press attention, with Bloomberg Law labeling his sparring a “tirade.”

Graham began his questioning by once again complaining about poor Democratic treatment of minority judicial nominees, contrasting it with liberals’ heralding of the nomination of the first Black woman to the Supreme Court.

Judge Janice Rogers Brown, who is Black, endured a two-year filibuster by Democrats, Graham said, before an agreement by the so-called Gang of 14 pushed through her confirmation to the U.S. Court of Appeals for the District of Columbia Circuit.

Graham went on to ask short questions and make statements about whether a fetus can feel pain, about nonprofit advocacy groups and about the groups’ role in a case challenging the Trump administration’s expanded use of expedited removal in immigration cases.

Graham said Jackson’s ruling for immigrants was overturned on appeal, which he sees as “Exhibit A of activism.”

Graham then launched into an attack on Jackson’s sentencing in child pornography cases.

“There’s an epidemic of this on the internet,” he said, and Jackson should not discount the number of images possessed by a defendant just because they are received online rather than in the mail.

Jackson responded that, at the time that the child pornography statute was enacted, the crime was being committed by people who were mailing photos. As a result, possession of a large number of images was an aggravating factor in sentencing. The statute has become outdated, however, because now someone can download thousands of images in 15 minutes. That could mean 30, 40 or 50 years in prison, she said.

“Good!” Graham interrupted. “You don’t think [that behavior] is a bad thing? I think that’s a horrible thing.”

Jackson said receiving thousands of images in a few seconds is no longer an indicator of a person who has committed the crime in an aggravated way.

Graham responded that he has no problem with a tough sentence.

“You lower the boom on anybody who goes on the internet and pulls out these images for their pleasure,” he said.

Bloomberg Law called the sparring “one of the sharpest exchanges yet during the hearings.” The New York Times noted Graham’s “caustic tone” and “flashes of temper.” CNN called Graham’s questioning “testy” and said he was “repeatedly interrupting” Jackson.

The sparring continued after the lunch break, when Republican Sen. Ted Cruz of Texas asked Jackson about her sentences in specific child pornography cases. Cruz talked over Jackson as she answered a question, spurring Senate Judiciary Committee Chairman Dick Durbin, a Democrat of Illinois, to tell Cruz to let Jackson finish her answer.

“No,” Cruz responded. “Not if she’s not going to answer the question.”

Later, Cruz continued questioning Jackson past his allotted time, accusing Durbin of taking some of his time by talking during his questioning. Durbin finally banged his gavel, spurring Cruz to retort, “You can bang it as loud as you want.”

“At some point, you have to follow the rules,” Durbin said.

After more protest by Cruz, the next senator, Democratic Sen. Chris Coons of Delaware, began his questioning.