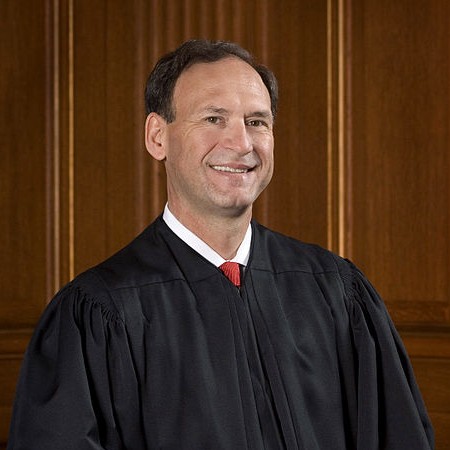 The U.S. Supreme Court intends to overturn the landmark Roe v. Wade decision, according to a draft majority opinion obtained and published by Politico on Monday night. The Supreme Court verified on Tuesday that it is a genuine draft, and Chief Justice John Roberts has ordered the marshal of the court to investigate the leak.

“The Constitution makes no reference to abortion, and no such right is implicitly protected by any constitutional provision, including the one on which the defenders of Roe and Casey now chiefly rely—the due process clause of the 14th Amendment,” wrote conservative Justice Samuel Alito in the 98-page draft opinion, which appears to have been circulated to the court Feb. 10. “That provision has been held to guarantee some rights that are not mentioned by the Constitution, but any such right must be ‘deeply rooted in this nation’s history and tradition’ and ‘implicit in the concept of ordered liberty.’”

“The right to abortion does not fall within this category,” Alito added.

The Supreme Court ruled in Roe in 1973 and Planned Parenthood v. Casey in 1992 that the Constitution protects a woman’s right to have an abortion before a fetus becomes viable. Most medical experts agree that this happens around 24 weeks of pregnancy.

Alito’s draft opinion is in Dobbs v. Jackson Women’s Health Organization, a case that arose after Mississippi passed a law in 2018 that bans most abortions after 15 weeks of pregnancy.

Jackson Women’s Health Organization, the only licensed abortion facility in the state, filed a lawsuit, along with one of its doctors, challenging the constitutionality of the law. The district court agreed with the clinic, determining that Supreme Court precedent prohibited states from banning abortions before a fetus is viable. The 5th U.S. Circuit Court of Appeals at New Orleans later affirmed that the Mississippi law was an unconstitutional ban on previability abortions.

When the Supreme Court heard oral arguments in the case in December, justices seemed divided on whether to set 15 weeks as the dividing line for viability or whether to overturn Roe entirely.

In Alito’s draft majority opinion, he contends that most states made abortion a crime at all stages of pregnancy when the 14th Amendment was adopted. He also said the right to abortion is “critically different” from any other right protected by the 14th Amendment because it destroys what Roe and Casey called “fetal life.” Politico reports that conservative justices Clarence Thomas, Neil Gorsuch, Brett Kavanaugh and Amy Coney Barrett voted with Alito after the original hearing.

Alito additionally addressed arguments that overturning the court’s precedent could prove to be dangerous, arguing that stare decisis does not “compel unending adherence to Roe’s abuse of judicial authority.” He pointed to several decisions, including Brown v. Board of Education, that have overruled prior precedents.

“Roe was egregiously wrong from the start,” Alito wrote. “Its reasoning was exceptionally weak, and the decision has had damaging consequences. And far from bringing about a national settlement of the abortion issue, Roe and Casey have enflamed debate and deepened division.

“It is time to heed the Constitution and return the issue of abortion to the people’s elected representatives.”

Alito’s opinion will not be final until it is published, and justices in the past have changed their votes as draft opinions circulate through the court. However, if the draft ruling largely stands, individual states will be faced with deciding whether to allow, restrict or ban abortion. Trigger laws in some states would immediately ban abortion if the court was to overturn Roe.

The New York Times, the Washington Post, CNN, Reuters and USA Today also have coverage of the rare leak of the Supreme Court’s draft majority opinion.

“To the extent this betrayal of the confidences of the court was intended to undermine the integrity of our operations, it will not succeed,” Roberts said in the Supreme Court’s Tuesday statement. “The work of the court will not be affected in any way. … This was a singular and egregious breach of that trust that is an affront to the court and the community of public servants who work here.”

Democratic governors of at least 16 states, including New Mexico, Michigan and North Carolina, have pledged to maintain the legality of abortion, according to the New York Times. Meanwhile, Republican governors of South Dakota and other states praised the draft opinion and said they would continue working to restrict abortions.

“Tonight, let us say a prayer for life and that our justices remain steadfast in their convictions,” Republican Gov. Kay Ivey of Alabama wrote on Twitter on Monday.

Supporters of abortion rights also reacted swiftly to the contents of the draft opinion on social media.

Cecile Richards, a past president of Planned Parenthood Federation of America, wrote in a Twitter post on Monday that, “this is not what the American people want; this is Republican politicians putting government in charge of your pregnancy.”

Nancy Northup, the president and CEO of the Center for Reproductive Rights, also said in a statement on Twitter on Monday if the Supreme Court overturns Roe, “it will be an unjustified, unprecedented stripping away of a guaranteed right that has been in place for nearly five decades.”

Among anti-abortion groups that applauded the Supreme Court’s draft opinion, Marjorie Dannenfelser, the president of Susan B. Anthony List, said its statement shared on Twitter on Monday, “the American people have the right to act through their elected officials to debate and enact laws that protect unborn children and women.”

She added that, “if Roe is indeed overturned, our job will be to build consensus for the strongest protections possible for unborn children and women in every legislature.”

The Supreme Court’s final opinion will likely be released within the next two months.

In a statement released Tuesday, ABA President Reginald Turner said the ABA “remains committed to protecting the freedom of individual women to make the highly personal and complex decision of whether to have an abortion.”

“The American Bar Association has long supported the right to reproductive choice under existing Supreme Court precedents,” Turner said. “The association opposes any law that prevents access to a legal abortion and supports the rights of women to choose to terminate a pregnancy before fetal viability or to protect the life or health of the mother.

“Over the past 49 years, the right to choose to have an abortion before viability has become embedded in the fabric of our society. It has become a right that affects women in every way—from economics to health to career choices and family life. Reversing this right would undermine the stability of the law gained through our adherence to precedents; it would jeopardize the public’s faith in our legal institutions; and it would have a devastating effect on the expectations—and the lives—of millions of women,” he added.

Updated May 3 at 3:18 p.m. to include ABA President Reginald Turner’s statement.