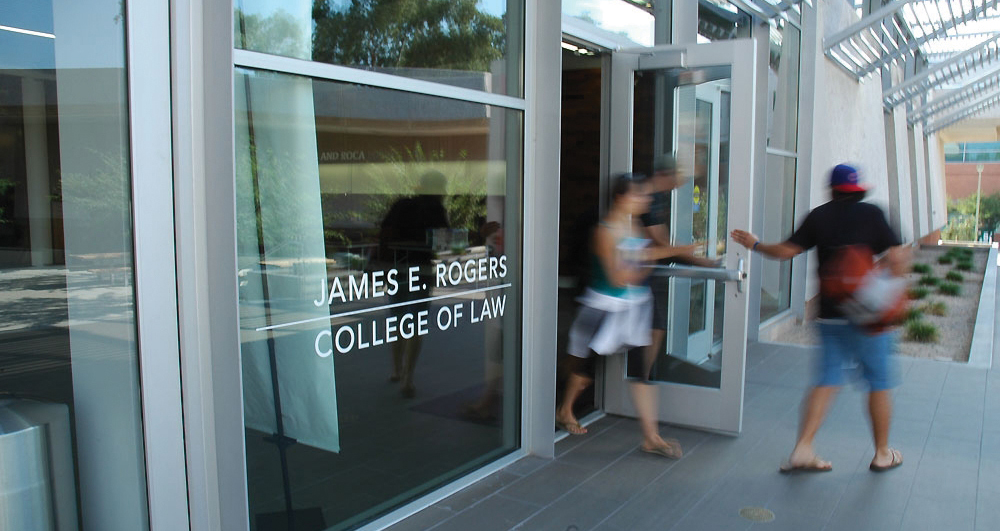 The University of Arizona James E. Rogers College of Law has started a two-year pilot project that licenses a small group of nonlawyers to give limited legal advice on civil matters stemming from domestic violence.

The individuals will be known as licensed legal advocates and trained to provide legal advice on topics including protective orders, divorce, child custody, consumer protection and housing, according to a Monday news release.

A University of Arizona summary of the project cites Legal Services Corp. figures stating that in the United States, 97% of low-income domestic violence survivors had civil legal issues in 2017, but only 23% of that group sought legal help. And according to the Arizona Department of Health Services, one or more children in the state witness domestic violence every 44 minutes.

The project follows a 2019 Arizona Supreme Court task force report on legal services delivery, with suggestions including the elimination Arizona’s Rule of Professional Conduct 5.4, which is based on Rule 5.4 of the ABA Model Rules of Professional Conduct restricting partnerships with nonlawyers in the practice of law. The Arizona Supreme Court is expected to vote on the recommendation on Rule 5.4 in August.

“We are in favor of greenlighting pilot projects that are carefully constructed to close the civil justice gap in services while simultaneously ensuring the public is protected from inept, unprofessional or fraudulent services,” she wrote.

The University of Arizona project, which is managed by its Innovation for Justice Program, is listed as recommendation No. 7 in the task force report. The idea was developed and submitted by Stacy Butler, the program’s director, and her students, along with a former state bar president and a retired family law judge. The Innovation for Justice Program focuses on access to justice issues and how technology and innovation can help.

“We wanted to create a tier that could drive change, and domestic advocates was a natural fit. They already have all the training, they know a lot about how the system really works, and they’re trauma-informed,” Butler says.

Between three and four lay legal advocates from Southern Arizona’s Emerge! Center Against Domestic Abuse are expected to start an eight-week training program in September. Participants must have a bachelor’s degree and at least 2,000 hours of work as a lay legal advocate. (Lay legal advocates can provide general information about legal forms and court procedures in issues stemming from domestic violence, but they cannot give legal advice.)

Training will combine an online curriculum with in-person classes, and the Arizona Supreme Court’s Administrative Office of the Courts is working with the Innovation for Justice Program to embed a licensing exam in the course. If the pilot is successful and becomes permanent, the licensed legal advocates will be required to take continuing legal education courses post-training, Butler says.

Clients who need to go to court in a civil matter will represent themselves, but the licensed legal advocate will have a seat at the table.

“There will be more of a focus on ethics and advocacy, and it will be confirming that they have a solid understanding on civil procedure,” Butler says.

When asked about concerns of whether licensed legal advocates might miss something when giving legal advice, Butler said all of the adjunct professors who teach the pilot project will continue to serve as mentors once training is finished.

The pilot project runs until the end of 2021 and includes a research study with data looking at things like procedural fairness, whether a licensed legal advocate was able to provide the required level of legal services, and case outcomes.

Meanwhile, the Utah Supreme Court in August voted to pursue a regulatory reform working group’s recommendations, which included either eliminating or relaxing its Rule 5.4.

The Utah report, as well as the Arizona Supreme Court task force report, are both cited in the report accompanying Resolution 115, which is scheduled to be voted on by the House of Delegates on Feb. 17 at the ABA Midyear Meeting in Austin, Texas. The resolution asks the ABA to encourage jurisdictions to consider regulatory innovation and examine existing regulations, including those related to the unauthorized practice of law.