A look back at Fox's 'Ally McBeal'

<!!–The cast of Ally McBeal. Photo from MovieStillsDB.–>

I just finished a jury trial last week. It didn’t go quite the way I wanted, but the client was happy. The prosecution dismissed the case after a little over a day. I felt we had a good chance of walking away with multiple acquittals, but the client was thrilled to have the dismissals before the case reached the jury. I had to put my pride and ego aside and remember that this business is about what’s best for my clients and not my “win-loss” record.

Obviously, the result is still a “win,” but those acquittals are always the icing on the cake. Nevertheless, preparations and the trial put me behind on writing this column, so I figured I’d dive into something I’ve had on my to-do list for quite some time. Consequently, let’s take a look back at Ally McBeal.

Starring Calista Flockhart as the titular character, Ally McBeal ran for five seasons from 1997 to 2002. Created by David E. Kelley (L.A. Law, The Practice and Boston Legal), the Fox series followed McBeal as she navigated the intersection between her personal life and law career. The show won multiple Emmys and Golden Globes throughout the late 1990s and early 2000s. Still, it was ultimately canceled after the fifth season, which became the first to fail to win any of the aforementioned awards. Interestingly, Ally McBeal took place in the same television universe as The Practice, and the two “crossed over” from time to time, even though they were on separate networks.

As is always the case with these “A Look Back” segments, I utilized Episode Ninja to source the number one rated Ally McBeal episode—“Heart and Soul” (the 15th entry in the series’ final season). All five seasons stream on Hulu, which is helpful since I haven’t watched the show in over 20 years. I’ve mentioned before how it’s sometimes tricky gauging a series based on one installment, and how that challenge can be exacerbated when the selected segment falls in the later portion of the series’ run.

Luckily, “Heart and Soul” began with a recap of the show’s then-recent developments. From the initial run down, I was immediately reminded of the series’ surreal approach. Dream sequences and visual/auditory embellishments are overt and constant, and it would be an enticing tool if it weren’t so persistent. As is, the tactic comes off overdone and distracting more than anything.

This episode dealt with a topic I initially discussed in my column years ago: prisoner organ donations. A young lady approaches one of the attorneys at McBeal’s firm in hopes of challenging the ethical rules and limitations restricting a hospital from assisting the girl’s father—an inmate incarcerated on murder charges—in donating his heart while still alive. It’s noteworthy that the moral and ethical implications are still as contentious today as they were 20 years ago when this episode aired.

Overall, “Heart and Soul” was a mediocre offering. It was almost devoid of any real “law.” There wasn’t much in the way of discussion regarding mandates, statutes or evidentiary rules, and there was only one courtroom setting separated into a couple of scenes. That’s not unusual for this category, but the testimony was bland and overshadowed by an only somewhat interesting debate regarding the public policy aspects of prisoner organ donation. Honestly, that debate could have been conveyed through the prism of any television genre.

Ultimately, that was the overall takeaway: It seems the legal trappings were nothing more than a façade to create some unique angle for an otherwise generic comedy with a few drops of drama. That may not be the overriding tale regarding the series as a whole, but I think Ally McBeal’s lasting effect is much more tangible than the stories the series told. 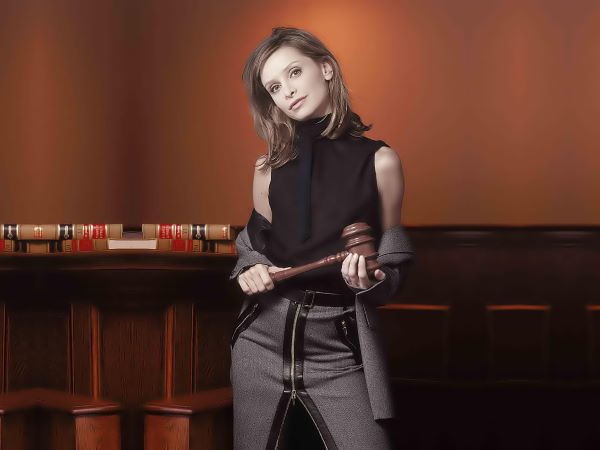 Misogyny and women in the law

When I was in law school, Ally McBeal was still fresh enough that it was a topic of discussion in our career development center. When we began our first round of interviews with the larger local firms (if you placed in the top such-and-such percentage, you were automatically granted an interview), I remember some of my female classmates discussing “interview attire” with me.

Aside from telling me I needed new shoes—I probably needed more than just new shoes—they discussed how off-putting it was when they were informed, “This isn’t Ally McBeal,” and they should ensure they were very professional in their clothing choices. Although this seems like ages ago, I still remember sensing the insult they felt from the notion others thought it necessary to point out something so obvious.

But that wasn’t the only wardrobe-related aspect of pseudo discrimination I saw my fellow female colleagues experience. Very early in my career, a particular judge occupied one of the positions in my local courthouse. He had a reputation for being especially tough on female attorneys. Word was that he wouldn’t allow them to wear dresses in his courtroom; he required that they wear pantsuits instead. I still, to this day, don’t know the mechanism he used to enforce this “rule”—but that is a microcosm of the significant problem itself: As a man, I never had to deal with that scrutiny, so I was ignorant to how the critique and criticism even played out. There was a double standard.

A challenge in an already challenging profession

I would never sit here and write about the plight of women in the legal profession if I had not experienced their struggles at least second-hand. I have female associate attorneys who have made it abundantly clear that practicing law (specifically criminal defense) as a woman is incredibly challenging due to the unfair scrutiny and unwarranted double standards.

Speaking with them in anticipation of this column, I inquired about the most challenging aspects they experience. Both had already told me stories of communicating with potential clients calling to speak with me, only to be told by the caller they “needed to speak with an attorney” once a female’s voice appeared on the other end of the line. It was interesting to get both perspectives: One has practiced for years, and the other has practiced for months. Sadly, their experiences were still very similar.

Both noted the challenge of taking a “tough and firm” approach with some clients—as is often needed—without being perceived negatively. They noted how many people traditionally have an issue with a woman being firm, going so far as to explain the trouble of coming across as a “b—-.” As they relayed, toeing the line between being respected for your firm conviction and being disrespected and cast in a negative light is a daily battle that men don’t have to consider.

And they’re right; my clients often applaud me if they feel I am coming across as aggressive and intimidating. Male attorneys get labeled “pit bulls,” “sharks,” “strong-arms,” “hammers,” etc. when they exhibit a dominant, confrontational demeanor. On the other hand, women often get the “b” word—and it’s far from fair.

One of the best attorneys I ever battled in jury trial made a point during voir dire to address that issue head-on. She picked an older man from the venire and asked him why he hadn’t been engaging with her questions. He didn’t have a good answer, and she point-blank asked him if it was because he thought she was a “b—-” for the way she was carrying herself. He was speechless, but the exchange seemed to resonate, and I believe it gave her carte blanche moving forward throughout the proceeding.

It was ingenious, but, sadly, it was also likely necessary—even in this day and age.