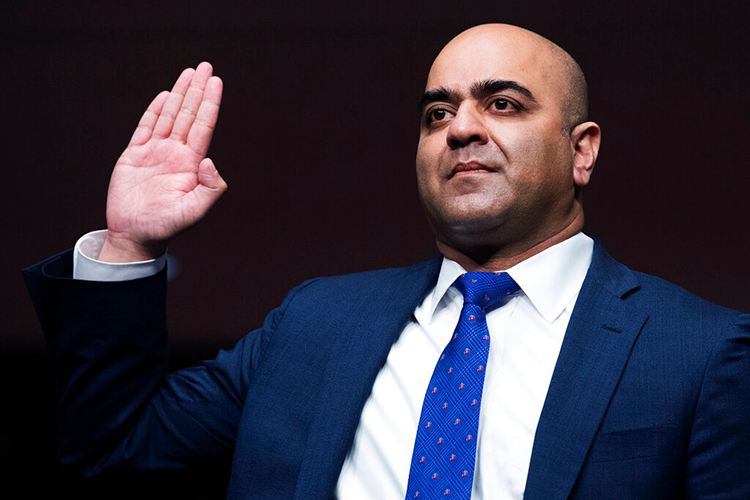 Judge Zahid Quraishi at his April confirmation hearing for a position on the U.S. District Court for the District of New Jersey. (Tom Williams/Pool via AP)

The son of Pakistani immigrants, Quraishi earned his law degree from Rutgers Law School, and subsequently served in the military, with the U.S. Department of Homeland Security and worked at the U.S. Attorney’s Office in New Jersey. In 2019, he was appointed as a U.S. magistrate judge, becoming the first Asian American to serve on the federal bench in New Jersey.

During his confirmation hearing, Quraishi’s faith identity attracted special inquiry and constitutional scrutiny. Specifically, Illinois Democratic Sen. Richard Durbin, chairperson of the Judiciary Committee, asked Quraishi about the extent of his knowledge of Shariah, although noting his embarrassment with the question. While often associated with religious extremism—manifested in forced conversions, oppressed women, extrajudicial violence—most Muslim Americans regard it simply as Divine guidance promoting good will, morality and humanitarianism, including universal virtues such as honesty, forgiveness and charitable giving.

In response to the senator’s question, Judge Quraishi responded that he knew nothing about it.

To be sure, Muslim Americans are religiously diverse. Whereas some observe orthodox Islamic faith practices, others do not. Regardless, pursuant to constitutional protections, one’s faith practices should not reflect upon his or her qualifications for a judicial appointment nor serve as a barrier to public service.

The First Amendment famously consists of two clauses that, in the cumulative, represent a national commitment to religious freedom. While the Establishment Clause prohibits the government from imposing religious beliefs and practices, the Free Exercise Clause prevents interference with it.

In addition, Article VI of the Constitution mentions religion in the spirit of upholding religious conscience. This lesser-known provision, the No Religious Test Clause, prohibits the imposition of ecclesiastical requirements to qualify for public office. In doing so, the Founding Fathers moved away from a long-standing form of religious discrimination prominent in England and the first colonies that barred members of particular faith communities from public service. The U.S. Supreme Court case, Torcaso v. Watkins, decided in 1961, may prove instructive.

The governor of Maryland appointed Roy Torcaso as a notary public, but he was denied his commission because he refused to affirm his belief in the “existence in God,” as the state constitution required. Torcaso sued in state court and lost. So, he appealed, and the state’s highest court affirmed the lower court’s findings. He then appealed to the high court explaining, “The point at issue is not whether I believe in a supreme being, but whether the state has a right to inquire into my beliefs.”

Ultimately, the Supreme Court found that requiring an oath to affirm existence in belief in God in order to hold public office was a religious test, and as such, unconstitutional. The court explained that the Maryland requirement put the state on one side of a particular set of believers in violation of the Establishment Clause.

Significantly, some legal scholars have debated whether—and to what extent—the No Religious Test Clause applies to other service contexts. This is particularly so in the context of nominations to the federal judiciary where members of Congress serve as gatekeepers during confirmation hearings. While fulfilling their gatekeeping function, official inquiry into the theology, rather than ideology or judicial record, of a disfavored religious minority candidate may represent such a service barrier.

Indeed, Judge Quraishi may be the first Muslim American successfully appointed to the federal judiciary, but he is hardly the first to experience official scrutiny due to his religious beliefs. In the mid-19th century, for instance, Roger Brooke Taney faced considerable criticism when he was nominated as chief justice of the Supreme Court because he was Catholic. Additionally, President Herbert Hoover expressed concern over Benjamin Cardozo, the second Jewish person to sit on the high court. Further, President Richard M. Nixon suggested that the late Supreme Court Justice William Rehnquist (a Lutheran) change his religion and try to get baptized.

Regarding the judicial confirmation processes of religious minorities, the experience of Chief Justice John G. Roberts Jr. is noteworthy. Robert’s Catholic faith attracted particular scrutiny in relation to his anticipated opposition to abortion. For instance, during meetings with senators who would vote on his nomination, Sen. Durbin asked what he would do if faced with a conflict between his faith and the law.

In response to the Roberts nomination, Northwestern Pritzker School of Law professor Stephen Presser and University of Notre Dame Law School professor Charles Rice argued the Religious Test Clause “reflects the belief of the framers that one’s religion is a matter between one’s God and one’s self, and should not play a role in determining suitability for public office.” They maintained suggesting that belief in a specific religion “is a disqualification for office would be to embrace, at least analogously, the evil sought to be prevented by the Constitutional prohibition of religious tests.”

Arguably, it is clear that the Constitution, vis-a-vis the No Religious Test Clause, sought to eliminate religious barriers to holding public office. Not only do such barriers violate the Establishment Clause as the Torcaso court illuminated, they also have a chilling effect on the free exercise of religion despite First Amendment protections. A budding attorney, as well as lawmakers, watching the Quraishi confirmation hearing may learn several unfortunate lessons that run counter to our values and ideals. Indeed, the ability to inquire into a nominee’s theological beliefs places an additional burden on members of disfavored religious communities who are subject to related official scrutiny while stigmatizing that group. The underlying assumption is that a judge from a disfavored faith group would face an inherent conflict in the faithful interpretation of the laws while others would not. While Quraishi is not the last Muslim American, or member of a minority religious community, to be nominated and successfully confirmed to the federal judiciary, let’s hope it is the last time such barriers are entertained.

Engy Abdelkader chairs the Rights of Immigrants Committee with the ABA Section of Civil Rights and Social Justice and enjoys a presidential appointment to the ABA Coalition on Racial and Ethnic Justice. She teaches law at Mitchell Hamline School of Law and related courses at Rutgers University.