The Defamation Trial of Johnny Depp: When thespians testify, who can you believe? 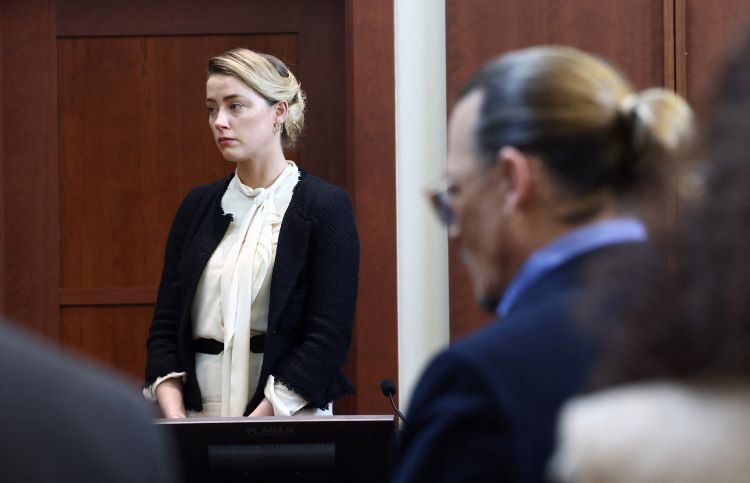 Actress Amber Heard testifies as actor Johnny Depp looks on during a defamation trial at the Fairfax County Circuit Courthouse in Fairfax, Virginia, on May 5. Photo by Jim Lo Scalzo/Pool/AFP via Getty Images.

My main office has three large conference rooms. They are outfitted with presentable marble tables and large, comfortable black chairs, and they are adorned with images of the Oklahoma City skyline. More important, though, they have TVs.

Clients, potential or existing, should have something to watch while waiting for attorneys. I keep the channel on Court TV. Occasionally, I’ll catch some of the cases playing out, if only in passing. However, the recent case involving Johnny Depp’s defamation lawsuit against ex-wife Amber Heard, regarding a 2018 op-ed for the Washington Post in which she claimed to be the victim of domestic abuse, has grabbed my attention.

I briefly mentioned Court TV in this column years ago when recounting the history of cameras in the courtroom. You can revisit that article if interested.

Court TV initially launched in 1991. It came into its own and began to garner widespread viewership and appeal in 1993 with the Menendez brothers’ first trial, and that momentum continued with O.J. Simpson’s murder trial in 1995. In 2008, Court TV was relaunched as truTV. Court TV as we view it today was reintroduced in 2019 and now now airs “gavel to gavel” live trial coverage.

Watching a trial via livestream is sometimes surreal for a trial attorney. You see the process—you know from experience what’s playing out is authentic, this is how the system appears typically and this is how the parties proceed. But that reality becomes disjointed when a commentator interrupts the flow of testimony to announce a commercial break. It makes me wonder how those who’ve never seen an in-person trial process the video feed.

Depp’s defamation case is fascinating because of the dichotomy it presents regarding the actor who acts and the man who testifies. At first blush, I was surprised at how disheveled Depp’s attire often appears. He seems to have a vagabond air by nature, reminiscent of his “Jack Sparrow” character. There are chains, rings and trinkets—honestly, he seemed to jingle at times while on the stand. It’s an odd coupling with his frequently unflattering suits and his ties that never look properly tied or put together all that well.

That may be a strategic choice, however. It’s apparent Depp was mostly prepped for trial, which makes sense considering his wealth and prior experience testifying (he pursued a failed defamation lawsuit in London against the Sun newspaper in 2020). Moreover, his attorneys surely anticipated the very negative implications to be drawn from some of Depp’s graphic and violent text messages regarding Heard. Consequently, one would think his legal team actively tried to soften their client in the face of such harsh language.

The text messages are just one example of the many aspects of Depp’s private life served on a platter to the public. The testimonial aspect of this trial publicizes so much of the litigants’ personal drama. To a degree, it’s sad when one realizes that a man who has little to no privacy (unless he manages to hide away from paparazzi and fans) is now handing over the remainder of his anonymity on such a public stage. That’s admittedly by his own design (and lawsuits), but the reality is still depressing.

When testifying, Depp did his best to discuss and embrace his addiction to “roxies” (Roxicodone), his financial distress, the abuse he suffered at his mother’s hands, and various other aspects of his life that provide a touch of humanity while attempting to toss aside his perceived Hollywood pedestal. Consequently, his testimony was best during direct, as is usually the case, because he was allowed to show more of that humanity. His comments—such as thinking aloud, “Well, I guess that might be hearsay … I’m learning …” when seeing Heard’s attorney prepared to object—add to that.

Even in his worst moments, Depp largely came off as more personable and empathetic than Heard regarding appropriate and anticipated reactions in court. Whether purposefully or not, she comes as being off very cold. She appears almost emotionless, and even in situations where she hears herself talk about throwing pots and pans at Depp—or admitting to hitting Depp—she stares blankly. Perhaps that stems from reliving this allegedly abusive relationship—assuming her accusations are true.

During her direct testimony, though, she did seem to come to life … albeit too much, perhaps. Again, that perception may be due to the underlying understanding that she is an actress; however, there is a staunch difference between her testimony and Depp’s. Whereas Depp seemed to be having a genuine back-and-forth with the attorneys, it was clear Heard was operating on somewhat of a “script.”

She was well-rehearsed, and there were asides built in her testimony to lay the foundation for things to come, such as potential testimony from her therapist. Furthermore, she did the one thing I absolutely hate to see from lay witnesses: She testified directly to the jury. I don’t know if her counsel instructed her to do that or if it was something she instead assimilated from the professional witnesses earlier in the trial. Still, I think it’s very off-putting. Again, it just makes the production seem much more practiced.

Perhaps she’s just a skilled thespian, much like Depp. Again, there’s always the underlying contrast between actor/actress and witness. The chasm is unlike anything I’ve personally dealt with in a courtroom, and it’s kept me more engaged than I initially anticipated. I would imagine the media coverage would discuss this contrast more, but the closest I’ve noticed is analysis from body language experts.

It’s also enthralling to see the attorneys—through the dual-screen method Court TV employs—and how they interact with the witnesses. For example, Heard’s counsel during Depp’s cross could have done a better job allowing the witness to answer questions as opposed to constantly cutting him off. There’s a line you must walk, and there’s a decision you must make regarding how much attitude you’re going to give a witness. I believe you only give as much as you get, and you never draw first blood. That wasn’t the case here.

On the other side, Depp’s attorney didn’t do herself any favors by consistently asking to approach the bench, even when making objections while he was being cross-examined. As a trial lawyer, your job is to understand your audience: the jury. Juries don’t appreciate feeling misled. Constantly asking to approach and speak “in secret” gives off the impression you’re hiding something, right or wrong, and it can backfire.

The attorneys also suffered from a few issues during Heard’s direct testimony. The attorney directing her obviously has some skill, but it’s puzzling to see her consistently fumble around with hearsay issues. I understand her client isn’t necessarily assisting her in alleviating those, but she has to do a better job of asking questions in a way that won’t elicit a hearsay response.

Depp’s attorney, who will ultimately cross-examine Heard, did a great job of controlling the direct testimony and limiting the amount of information Heard was able to relay; however, she runs the risk of annoying the jury by objecting too much. Just because you can object doesn’t necessarily mean you should in all situations.

According to Depp, regardless of the vulnerability he experiences through the process as a result of exposing his private life, he “can’t say [he’s] embarrassed because [he] know[s] [he’s] doing the right thing …” because he has a “responsibility to clear [his] name.”

That “responsibility” will continue in a Fairfax, Virginia, courtroom while a seven-person jury works to determine the merits of the parties’ positions. To reach a verdict, they will apply the Virginia Model Jury Instructions for civil cases, which, pursuant to related to defamation, require the plaintiff to prove:

The parties will undoubtedly submit much more evidence in this matter. It will be captivating to see the audience absorb anticipated testimony from other witnesses. The trial will likely play out for weeks, much to the litigants’ fans’ entertainment or disdain (depending on their preference of parties).

After all, these are two trained thespians, and it’s challenging to tell who’s doing the better job. The only thing certain is that the human drama playing out on Court TV is more tangible and alluring than perhaps anything either party has ever relayed on the silver screen.