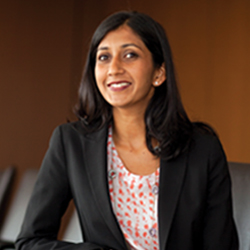 Gumption (and an innate sense of business development) has propelled Goodwin Procter associate Nithya Das into the spotlight among clients and colleagues and within the venture capital community.

Das melds a variety of social media campaigns into new legal marketing models that engage clients and boost her practice. And through the creation of the Founder’s Toolbox, a companion blog to Goodwin Procter’s Founder’s Workbench website for startup entrepreneurs, she’s elevated the firm’s brand recognition and her own.

Das, 30, who got her JD from Brooklyn Law School and joined Goodwin Procter in 2006, is in the business law department. A member of the technology companies group, she represents numerous venture capitalists, private equity investors and investment banks. She also authors the Hungry Desi blog, where she posts about her experiments in the kitchen as she catalogs recipes for traditional Indian food and spicy vegetarian dishes.

When the firm launched the Founder’s Workbench in September 2010 as a way to provide entrepreneurs and would-be startups with access to free documents and best practices, Das proposed the Founder’s Toolbox as a way to keep the site from becoming a static resource. Both sites have gained traction in the startup community.

“Venture capitalists don’t consume information through client alerts,” Das says of her client base. “Instead they read blogs, click on links posted to Twitter and pay attention to the things that show up in their RSS feeds. The medium [to communicate] has definitely changed.”

While the Founder’s Toolbox helpfully promotes the Workbench website, merely posting good content doesn’t guarantee an audience or client interaction, a lesson Das learned from her personal blog. “We had to get the firm engaged on Twitter and spread the word to the entrepreneurial community that we’re a resource.

“When I first started food blogging, somebody said that if you want to drive traffic to your site, you really need to embrace the community and join it,” she says. Das avidly followed the advice and became a frequent commenter within the online foodie world, which also boosted her credibility with her tech-savvy clients.

“I realized that because I worked with so many clients in the social media and Internet space, knowing that I had started something of my own that faced similar tech challenges and [that I] possessed an entrepreneurial spirit resonated with them.”

She also quickly realized there was a dearth of high-caliber legal blogs focused on the emerging-tech industry. “There was a sentiment from the VC blogs that called for technology lawyers to blog and shed light on the venture startup industry,” Das says.

Das pools the talents of lawyers within her group to keep the Founder’s Toolbox blog fresh with a constant stream of posts. In fact, an interview with philanthropist and “angel investor” Joanne Wilson, also known as “Gotham Gal,” was featured as part of the blog’s Founder Fridays Q&A series, also a brainchild of Das’. That landed the Founder’s Toolbox more page views and unique visitors than the firm’s website for a period of time.

“She’s got a tremendous work ethic and a really good sense of business development,” says partner John J. Egan, co-chair of the technology companies group. “A lot of young associates aren’t great at business development. Generally it’s an acquired skill. Yet she’s taken it to another level and applied that skill set to social media, which is very unique.”

In March, Das and a few of her colleagues embarked on a guerrilla marketing mission to South by Southwest, the festival of music, film and interactive programs in Austin, Texas. The five-day trip gave Das the opportunity to mingle with prospective clients and contacts she’d connected with via social media on their own turf. Das tweeted highlights and blogged about events on the firm’s website, an unusual feat at larger firms where most social media posts are carefully vetted through marketing departments. The perk was akin to “getting the keys to the holy grail,” Das jokes.

“They made a lot of connections, and now we’re looking seriously at having a firm presence there next year,” Egan says of the Austin trip. “She’s an associate, and she’s leading a serious business development effort.”

Update: As of Sept. 12 Das will be legal counsel at AppNexus in New York and plans to remain involved with the Founder’s Workbench in an advisory role.