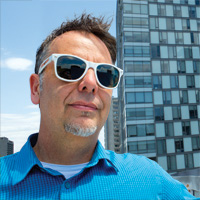 Ronald Deibert likes to refer to the laboratory he directs as the CSI of cyberspace.

Much like TV’s CSI, the Citizen Lab consists of specialists from several different fields of expertise. Founded by Deibert in 2001, the interdisciplinary initiative based at the University of Toronto’s Munk School of Global Affairs brings together political scientists, sociologists, computer scientists, engineers, graphic designers and security experts. The team’s objective is to promote global human rights by identifying cybersecurity threats, both state-sponsored and privately created.

“I’ve had a long-standing interest in information technology and security, and I wanted to do further empirical research into an area that I believed wasn’t being addressed,” says Deibert, 50, a husband and father of four who is also a political scientist and director of the Canada Centre for Global Security Studies at the university.

Among its many high-profile projects, Citizen Lab has provided the ammunition for digital rights groups to bring lawsuits on behalf of aggrieved parties. In February, the Electronic Frontier Foundation brought suit in the U.S. District Court for the District of Columbia against the Ethiopian government on behalf of an Ethiopian dissident living in the U.S. The dissident, identified under the pseudonym Kidane, had read a Citizen Lab report about how the Ethiopian government was using malware to target the computers of dissidents around the world and spy on them. Kidane gave the Citizen Lab his computer, alleging it contained the malware in question.

“EFF has a pretty large tech staff, and we have a number of technologists,” says EFF global policy analyst Eva Galperin, who has worked with the Citizen Lab on several projects, including a report on Syria’s malware use. “However, unlike Citizen Lab, we don’t have people who can reverse-engineer malware because it’s a very specialized skill.”

Deibert says the competition for information is the latest geopolitical struggle, and various states (and nonstate actors) are looking for an edge.

But, he argues, that competition often comes at the expense of human rights. For instance, members of the Dalai Lama’s office approached the Citizen Lab in 2009 because they suspected they were being spied on.

“We took it on as a research project and wiretapped their computers with consent,” Deibert says. “We then analyzed it in our labs and were able to see everything the hackers were doing.” That sting operation led to the exposure of GhostNet, a sophisticated surveillance ring based in China. (The Chinese government adamantly denied having any involvement with GhostNet.)

The Citizen Lab followed up with another bust one year later, exposing the Shadow Network, which had pilfered a large cache of classified military, security and diplomatic documents from India.

Keeping hold of a talented team, with the skills to stay a step ahead of hackers, is a key concern for Deibert these days.

“Citizen Lab is not the type of organization that can compete on salary level with the private security industry or even the government,” says Deibert. “What we can provide is the excitement of working on the most cutting-edge issues while helping the cause of human rights.”