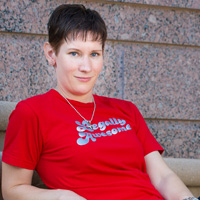 Ruth Carter was on the verge of burnout when she applied to law school. Overworked and underpaid, she sought to have a greater direct impact helping others than her work as a mental health therapist allowed.

Told “you can’t go wrong with a law degree,” Carter enrolled at Arizona State’s Sandra Day O’Connor College of Law. She quickly grasped that to find happiness in her new profession, she would have to stay true to herself—even if that meant calling out law school administrators or riding the transit system in her underpants.

“When I started law school, I drank the Kool-Aid thinking I needed to be in the top 1 percent of my class, hide my piercings and tattoos, and aspire to be a judicial clerk or big-law firm lawyer,” Carter says. “But I realized very fast that the classic, conservative lawyer ideas weren’t for me.”

Around the time Carter ditched the tattoo concealer, she also realized that grades didn’t reflect what she actually knew. So she stopped checking them and shifted her focus to learning and immersing herself in the areas of law she really enjoyed.

In 2009, Carter signed up to be one of the daring exhibitionists of Improv Everywhere’s No Pants Subway Ride, on which commuters doffed their trousers for the amusement and entertainment of other passengers. When her friends bailed, Carter forged ahead on the Phoenix light-rail system and cranked up her iPod to distract her from the silliness around her and help keep a straight face (as required by the event’s organizers).

Although some struggle to understand why adult professionals would coordinate a seemingly impromptu dance party in a public venue, flash mobs for entertainment and guerrilla marketing purposes are on the rise. Oreo celebrated its 100th anniversary this year with a series of flash mob birthday events. And flash mob scenes around the globe often go viral online, drawing millions of page views.

While many flash mob events take place without legal problems, others—like walking around a busy shopping mall in T-shirts that read “Coroner” and dragging fake body bags—arouse the attention of local police. Those events benefit from legal guidance throughout planning and execution to ensure the joke stays safe and fun for everyone, a role Carter happily assumes.

Through her work with Improv Arizona, Carter is building a national reputation as the go-to flash mob lawyer. She also blogs for several websites, including as the Undeniable Ruth; there she offers blogging and law school survival tips, and advises readers not to “lose your personality when you get your JD.” The blog also served as the platform for Carter’s somewhat infamous Sponsor a Law Kid program, designed to help defray costs during her last semester of law school.

Douglas Sylvester, recently appointed dean of the law school, credits Carter’s nontraditional approach to her life and career as a key to her success and happiness. “She is someone who strikes her own path and speaks her own mind, and in this work we don’t have enough people like that,” Sylvester says.

Carter graduated in May 2011 and opened her Phoenix solo firm in January. Outside of flash mobs, her practice is oriented to serving clients seeking business formation, contract negotiation and information technology assistance. Her office is wherever her laptop rests, but for confidential meetings she uses a conference room at the State Bar of Arizona or other collaborative workspaces.

Today, Carter jokes that she’s still overworked and underpaid, but this time she’s sustained by work she enjoys and the knowledge that those are temporary conditions most new solo practitioners face.