Thanks to chief justice, the Michigan Supreme Court pivoted to remote proceedings during COVID-19 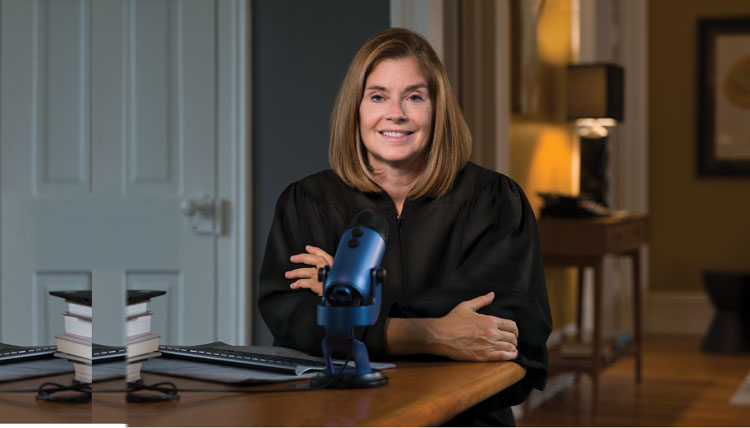 “When you are in the comfort of your own home, where you feel safe and secure, it’s easier to feel confident in letting the court know what’s on your mind. Also, everybody’s Zoom boxes are kind of the same size. There’s something equalizing about that,” says McCormack, 54. The state supreme court on March 15 issued an order requiring proceedings be conducted remotely when possible and followed that with another one April 7 expanding judges’ authority to conduct remote proceedings.

The state purchased Zoom licenses and videoconferencing hardware for courts prior to the pandemic, McCormack says, but few judges used the tools until April. By mid-October, Michigan courts were approaching 1.3 million hours of remote proceedings. “We had such a big assist from the pandemic because nobody had a choice but to try it,” says the chief justice, a former University of Michigan Law School professor who was elected to the state supreme court in 2012 and reelected in 2020.

After assembling a virtual courtroom task force in March, the court’s administrative office published online hearing standards and guidelines the following month. Criminal defendants can waive their right to be physically present during hearings and appear by video, the writing stated. It also described how clients and attorneys can meet privately in Zoom breakout rooms. Meanwhile, if it appeared a witness was being coached by someone off camera, the court could order the witness to change the camera angle to see if someone else was in the room.

Also, the guidelines directed courts to post daily dockets online, with instructions about accessing hearings. However, the writing asked that Zoom meeting IDs not be provided to the public or the press. Instead, nonlitigants can access the hearings through YouTube, where Michigan proceedings are livestreamed.

McCormack long has been interested in using technology to increase access to justice. For instance, she helped pioneer the creation of an online dispute resolution system known as MI-Resolve, which was launched in August 2019. Most of the disputes involve small claims or landlord-tenant cases. “It allows people in small-money cases to log on, use the platform and see if they can resolve their dispute,” she says.

When it came to getting courts ready to conduct remote hearings, because of McCormack’s work helping judges and staff with courtroom technology before the pandemic, the system was able to quickly go online when it needed to, says Elizabeth Tripp Clement, a state supreme court justice. She adds that McCormack has always explained why technology improvements were necessary and asked judges and staff what they needed for change.

“Anytime we heard from any judges or courts saying, ‘I can’t do this’ or they identified a roadblock, her response was immediate,” Clement adds.

McCormack says she relied on trial judges who were early adopters to pull along colleagues who were “less than eager” to follow suit. Today, she says judges and legal aid lawyers tell her parties are more comfortable doing court appearances from their homes. Also, there’s an increase in parties attending hearings.

“A lot of people just never showed up. But if you can show up just by logging onto your smartphone and seeing what you can do, people are much more likely to try that,” McCormack says. There have been concerns about maintaining decorum in Zoom hearings, and she says some court administrators have reported parties wearing improper clothing, or engaging in inappropriate court behaviors, like smoking cigarettes on camera. “Losing a bit of decorum is a small price to pay for increasing access.”

McCormack, a 1991 New York University School of Law graduate, started her legal career with the New York Legal Aid Society and later worked at the office of the public defender.

In 1996, she became a faculty fellow at Yale Law School, and she joined the law school faculty at the University of Michigan in 1998. Her academic work focused on criminal law and clinical courses.

McCormack’s godmother was also a New York legal aid lawyer, which is how the chief justice was drawn to the profession. She and her two siblings—actress Mary McCormack and actor/producer Will McCormack—are the children of a small-business owner and a social worker.

Her husband, Steven Croley, is a litigation partner with Latham & Watkins and a member of the University of Michigan law school faculty, which is where the couple met. They have four children in their blended family, each coming into the marriage with two children.