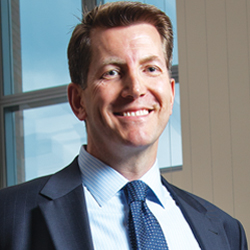 Paul Sweeney didn’t intend to make any money off a $250 startup incorporation package that Foley Hoag offered on the deal site LevelUp. But the marketing aspect of the email, sent to thousands in the Boston area, was priceless.

LevelUp is a pilot business within Scvngr, a mobile gaming company Seth Priebatsch, 22, founded. Sweeney is Priebatsch’s lawyer, and it’s been reported that Boston-based Scvngr raised about $20 million in venture capital over the past few years.

LevelUp is different than other online deal sites, Sweeney says, because its deals get even better on future purchases. With the Foley Hoag deal, offered in April, the first level was the incorporation package. That unlocked level 2 for buyers, Sweeney says, which offered accounting services for $150. Meeting with a venture capitalist was the level 3 offering, for $1.

The deal was limited to 10 people, Sweeney says, and sold out in less than one hour.

The $250 price tag for Foley Hoag’s work was less than half the price of filing fees and other related nonlegal costs, he adds. Generally, websites like LevelUp that sell discounted services share a percentage of sales with advertisers. However, Massachusetts professional conduct rules forbid fee sharing with nonlawyers, so language on the Foley Hoag LevelUp deal stated that proceeds went to MassChallenge, a Boston nonprofit that works with entrepreneurs.

Sweeney spoke with each of the 10 buyers and worked closely with an associate who helped them incorporate. He wouldn’t say how much the work cost in attorney time, but language on the LevelUp emailing valued the service at $2,800.

The business focuses of the 10 buyers included life sciences, software and social media.

“You might mistakenly think that this would attract people who are really looking for a deal,” says Sweeney, 45. “What we discovered to our surprise—a happy surprise—was that the [entrepreneurs] who came to us were really well plugged-in to social commerce and had terrific startups. They were people with a viable plan who knew the value of the package.”

Some of the buyers, now clients, have referred other business to the firm.

“This was business development and we didn’t do this to make money in the short term,” Sweeney says, but adds that “if Scvngr asked us to do it again, we’d do it in a heartbeat.”

He admits that when he presented the idea, some of the firm’s more seasoned lawyers were pushed to the edge of their comfort zones.

“Once I understood what it was, I was enthusiastic,” says William Kolb, Foley Hoag’s co-managing partner. “It was a chance to partner with a terrific client, and anytime you can get closer with a client and better understand their business model, it’s to our advantage.

“The second reason this was interesting was it gave us access to some new startup clients that are now clients of the firm.”

Sweeney considers emerging growth companies a big part of his practice and says it’s likely he’d have met the LevelUp clients through other avenues.

“I think many entrepreneurs see their law firms as the opposite of them,” he adds. “We’ve shown we’re willing to push the envelope a bit in how we communicate with clients.”