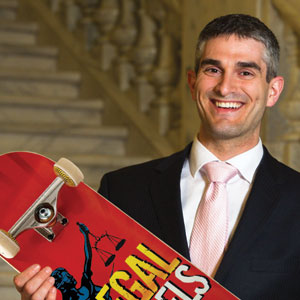 A lot of public sector lawyers talk a good game when it comes to promoting transparency and open government. For V. David Zvenyach, former general counsel for the Council of the District of Columbia, it’s been his calling card.

Zvenyach, 33, served as the council’s GC from April 2011 until March. Midway through his tenure, he learned legal hackers in D.C. were upset that there wasn’t a free electronic version of the District of Columbia Code accessible to the general public. The legal hackers hoped to use a digital copy to create websites and apps that would allow users to have a better understanding of local laws.

Copyright was behind the reason no electronic version was available. The official code was published initially by Westlaw and subsequently by LexisNexis, and their annotations and citations were protected as intellectual property.

Zvenyach, however, recognized the value of an informed citizenry. “I was enthusiastic that people were interested in the code itself,” he says. “It’s not often that you get a lot of people talking about our legal documents.”

After he started to understand the issues better, he became convinced that the government could and should embrace the open data movement, both as a public good and as a means to make things run more efficiently.

To that end, Zvenyach stripped out all the copyrighted annotations and citations in the D.C. Code and put the unofficial code online. He even invited members of the civic hacking community to play around with it, and he found himself learning how to use computer programming code.

“In my own experience, the moment the D.C. Code was in searchable form, I found myself using it more, and on a daily basis,” he says.

Zvenyach had almost no background or history with computers when he enrolled at the George Washington University Law School in 2003. “I took a comp sci class in college,” he says. “And I remember playing around with an old Commodore as a kid. But that’s about it.”

His bachelor’s degree was in mechanical engineering, and he came to law school to be a patent attorney. Instead, he joined the D.C. government in 2008 after a two-year federal clerkship.

Despite having no experience in politics, he served as chief of staff to D.C. council member Mary Cheh, his former law professor at GW. As chief of staff, he devoted himself to making things run more efficiently and transparently.

“He was instrumental in a number of initiatives I had, including reforming our Freedom of Information Act procedures so that the public would have greater access to government information,” Cheh says. And he helped with an initiative to reform D.C.’s electoral process, she says, and went to court to get information from the manufacturers of the district’s voting machines that allegedly overcounted the number of votes.

“His commitment to transparency has weaved through almost all the work he’s done,” says Cheh, who recommended him for the general counsel job in 2011.

For Zvenyach, what started as a casual foray into coding has turned into a career. He left the D.C. Council in March to join 18F, a digital services agency based within the federal government’s General Services Administration. The 18F agency designs digital products for government organizations and utilizes open-source code.

Zvenyach says the agency gives him a chance to be a professional legal hacker. “What’s really exciting about 18F is that we’re embracing the legal hacker culture,” he says. “The government is bringing in people from outside who just want to get in and fix things.”

Jonathan Willingham, a law school classmate who succeeded Zvenyach as Cheh’s chief of staff, says 18F is perfect for Zvenyach.

“Dave has always had an interest in law, accessibility and modernization,” Willingham says. “He also has this tech side that he didn’t always get to express. This is a way for him to bring all of these interests together.