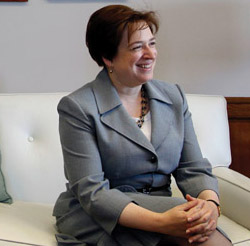 The confirmation of Elena Kagan to succeed Justice John Paul Stevens on the U.S. Supreme Court means that for the first time in its history the court has three women on its bench.

“I think it is a very big deal that there will be three woman justices,” says Pamela Harris, the executive director of the Supreme Court Institute at Georgetown University Law Center in Washington, D.C. “It sounds like a slim distinction [going from two to three], but having women on the court stops being the exception and starts being part of the landscape.

“And it’s not just any woman,” adds Harris, who was a law clerk to Justice Stevens. “Justice Kagan has been a trailblazer in a lot of ways. But people who are certain how she is going to vote as a justice are just wrong. She just hasn’t had a chance to develop a theory of constitutional interpretation.”

Kagan, 50, could be part of the court’s landscape for decades to come. She is also the first person to take the high court’s bench without judicial experience since William H. Rehnquist joined the court from the Justice Department in 1972. Court watchers will get their first glimpses of Kagan’s style on the bench with some high-profile cases in her first two weeks of oral arguments.

On Oct. 6, the justices will hear one of the biggest cases of the new term. In Snyder v. Phelps, the court will take up issues arising out of protests by members of the Westboro Baptist Church of Topeka, Kan., near the Maryland funeral of a U.S. Marine killed in Iraq in 2006. The court must decide whether the Marine’s father may recover for intentional infliction of emotional distress from protesters bearing signs such as “Thank God for Dead Soldiers.” (See “Grave Encounters.”)

And in Kagan’s second week of arguments, the new justice and her colleagues will take on Bruesewitz v. Wyeth, which examines whether federal law precludes liability for vaccine manufacturers when injury or death results from a vaccine’s avoidable side effects. (See “The Immune Response.”)

THE MATTER OF RECUSAL?

Kagan, a former aide to president Bill Clinton and Harvard Law School dean, served as U.S. solicitor general for a year and a half before being nominated to the high court by President Barack Obama. Kagan promised during her Senate confirmation hearings to recuse herself from any cases she handled as solicitor general, and she has identified about a dozen cases granted so far as those in which she will not participate.

Perhaps the most significant is Flores-Villar v. United States, slated for argument Nov. 10. It raises the question of whether a gender-based distinction in federal immigration law violates the equal protection clause of the 14th Amendment. Under the law, unmarried fathers who are U.S. citizens must have lived in the United States 10 years to convey citizenship on their children born abroad, while unmarried U.S. citizen mothers need only meet a one-year residency requirement.

Thomas C. Goldstein, a Supreme Court practitioner at Akin Gump Strauss Hauer & Feld in Washington, D.C., has studied the recusal issue and believes that Kagan will ultimately decide to sit out 15 merits cases in her first term and five in her second. That’s far fewer than the 61 cases that Thurgood Marshall recused himself from during his first term, of which 53 were related to his service as U.S. solicitor general from 1965 to 1967, according to Goldstein’s analysis.

“The court never likes to have situations where it doesn’t have all nine justices, so every recusal is significant,” says Goldstein, founder of the website SCOTUSblog, which tracks the high court. “But she is going to be on the court for a quarter-century. This was not Thurgood Marshall’s legacy, and this will not be hers either.”

Kagan also resisted efforts by Republicans on the Senate Judiciary Committee to exact a promise that she would recuse herself from any case to come before the court involving the 2010 health care overhaul. Kagan said that she was not involved in administration discussions about the legislation, although she was present at a meeting where it was briefly mentioned. While the law has been challenged in federal court, it could be some time before any such litigation reaches the Supreme Court.

The court will take up other contentious appeals both in its October arguments session and later in its term, and will add more cases to its docket until mid-January. The justices are scheduled to hear arguments in a case testing when convicted offenders seeking exoneration may gain access to biological evidence for DNA testing.

The justices have granted review of two cases from Arizona. One involves the constitutionality of a state tax credit for individual donations to groups that provide private school scholarships when the bulk of such aid benefits private religious schools. The other touches on undocumented aliens, although it stems not from Arizona’s most recent, highly controversial law requiring the police to check the immigration status of certain suspects but from an older law focused on employers.

And the justices will decide whether a state—California, in this case—may bar the sale of violent video games to minors.

On Oct. 13, the court is expected to hear Skinner v. Switzer, a case on the rights of inmates to seek access to biological evidence for DNA testing. In 2009, the justices ruled in District Attorney’s Office v. Osborne that inmates do not have a “freestanding, substantive due process right” to such DNA evidence. Chief Justice John G. Roberts Jr. wrote for the majority that to constitutionalize such a right would “short-circuit” federal and state legislative responses to the issue and state court development of procedures in this area.

But that ruling left open the possibility that inmates whose rights were not adequately protected by state procedures could use a federal civil rights law known as section 1983 to seek access to DNA evidence to prove their innocence.

In March, the Supreme Court stepped in just hours before the scheduled execution of Henry W. Skinner, who was convicted in the 1993 murders of three people in Pampa, Texas. And in May, the justices agreed to hear his appeal. Skinner contends he was too incapacitated to have killed his girlfriend and her two adult sons but that another adult present in the house had the motive and opportunity to commit the killings. Skinner has long sought wider DNA testing of blood and other biological evidence from the crime scene, but the Texas state courts rejected his requests for access.

Texas prosecutors argued at the petition stage that Skinner’s section 1983 suit was barred by various limitations, and that even if he gained access to the DNA evidence he seeks, “no item of evidence exists that would conclusively prove that Skinner did not commit murder.”

The legal question in Skinner’s case is whether inmates may seek access to such DNA evidence under a section 1983 suit, or whether such a claim is only viable under the more traditional appeals route of a writ of habeas corpus.

On Nov. 2, the court is scheduled to take up Schwarzenegger v. Entertainment Merchants Association, which involves a California law that bars the sale or rental of violent video games to minors under 18.

The law defines violent video games as those involving “killing, maiming, dismembering or sexually assaulting an image of a human being,” if those acts are depicted in a manner that either lacks serious literary, artistic, political or scientific value for minors or “enables the player to virtually inflict serious injury upon images of human beings or characters with substantially human characteristics in a manner which is especially heinous, cruel or depraved.”

The law was challenged as a violation of the First Amendment by video game publishers, and both a federal district court and the 9th U.S. Circuit Court of Appeals at San Francisco ruled in their favor. The game makers argue that parents, not the government, are the proper arbiters of what children may view.

California—in an appeal filed by Republican Gov. Arnold Schwarzenegger and Attorney General Jerry Brown, the Democratic nominee running to succeed him as governor—argues that such violent video games should be placed in the same constitutional category for minors as sexually explicit material.

“The First Amendment has never been understood as guaranteeing minors unfettered access to offensively violent material,” the state argues.

On Nov. 3, the justices are due to take up Arizona Christian School Tuition Organization v. Winn and Garriott v. Winn, Arizona cases involving an unusual form of state tax credit for private school tuition. The state program offers credits for donations to groups that provide scholarships for children to attend private schools.

The 9th Circuit ruled that the program likely violates the establishment clause of the First Amendment because the majority of the scholarships go to students attending religious schools, and that some of the independent “school tuition organizations” restrict their aid to religious school students. The appeals court distinguished the Arizona program from the Ohio private school voucher plan upheld by the Supreme Court under the establishment clause in the 2002 case of Zelman v. Simmons-Harris.

The justices have agreed to hear the appeal of the state of Arizona and one of the school tuition groups. However, opponents of the program have filed a supplemental brief, noting that the Arizona legislature made changes to the program this past spring designed to impose more oversight on the school tuition organizations. They say those legislative changes strengthen their argument that the aid awarded by the private groups is state aid, not private charity, and thus the tax credits violate the establishment clause. Though they’ve stopped short of asking the justices to dismiss the appeal, they suggest that the lower courts should have the opportunity to weigh the new legislative changes.

In another Arizona case, not yet scheduled for oral arguments, the justices will step into the contentious arena of immigration law, although not to take up the widely debated 2010 state law regarding police interactions with undocumented immigrants.

In Chamber of Commerce of the United States v. Candelaria, the court will weigh a 2007 Arizona law that bars employers in the state from “knowingly” or “intentionally” employing an “unauthorized alien.” The statute also requires employers to verify the eligibility of applicants through the E-Verify program, a pilot federal program first authorized in a 1996 federal immigration law.

The Arizona statute was challenged by a coalition of business and civil rights groups, who argue that the state requirement is pre-empted by federal immigration law, and that the E-Verify program was meant to be voluntary. They lost in both federal district court and the 9th Circuit.

The Obama administration, whose secretary of homeland security, Janet Napolitano, signed the Arizona statute into law as governor, recommended that the court take up the employer sanctions issues—but not the E-Verify requirement—which, because the program must be reauthorized by Congress by 2012, may soon become moot. The court, however, granted review of both questions and will likely hear arguments in December or early next year.

Mark Walsh is a freelance reporter at the U.S. Supreme Court.