A Panel of Their Peers 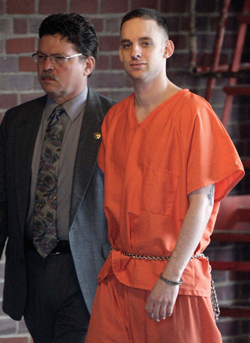 The soldiers drank whiskey and played cards at a traffic checkpoint they maintained near Yousifiyah, Iraq, about 20 miles southwest of Baghdad, when Army Pfc. Steven Dale Green and three comrades hatched the idea of raping a local girl and killing her family.

It was March 12, 2006, when Green and his pals headed for the home of a nearby family. There, they encountered the parents and their two daughters—one 14, the other 6.

Two soldiers, Sgt. Paul Cortez and Spc. James Barker, took turns raping the 14-year-old while the other held her down. Meanwhile, Green shot and killed the other three family members in another room as Pfc. Jesse Spielman served as a lookout.

After Green took a turn raping the girl, he shot her dead. The soldiers then burned the girl’s body beyond recognition, as well as some of the clothing they wore to the home.

Investigators initially blamed the murders on Iraqi insurgents, though Green within days twice admitted his role to a sergeant, who instead of having him arrested warned him to “either get out of the Army, or I’m going to help you do it.”

Green did exactly that. With his military commitment fulfilled, he was honorably discharged on May 16. Army investigators did not learn that he and the others were involved in the rape and murders until early June. Cortez, Barker and Spielman still were in the Army and thus referred to courts-martial.

Because Green already had separated from the Army before being charged, his case went to a civilian court. He tried to re-enlist to qualify for court-martial rather than risk trial in a civ ilian court, but the Army rejected him.

Today, Green is doing life without parole in a federal prison in Terre Haute, Ind. He says the civilian court—where in May 2009 he was convicted of murder, rape, conspiracy and using a firearm during a violent crime—unfairly hammered him, while his buddies got a better deal in court-martial, partly because military jurors may better understand the perils he and his comrades faced.

“It’s a fundamental problem, in my opinion, when you take acts that were committed on the battlefield and put them before a lay jury,” says defense lawyer Darren C. Wolff of Louisville, Ky. “That’s not a jury of this guy’s peers.”

Prosecutors sought the death penalty for Green, but jurors spared his life when they failed to agree unanimously. Instead, Green received five consecutive life terms with no chance for release.

But he complains that his co-defendants got the deal of the century. The military did not seek the death penalty, instead using it to extract guilty pleas from the three. This resulted in sentences of 90 years for Barker, 100 years for Cortez and 110 years for Spielman, with each eligible for release in 10 years provided they testified against Green, the sole shooter.

In an argument filed with the Cincinnati-based 6th U.S. Circuit Court of Appeals, Green says courts-martial under the Uniform Code of Military Justice afforded his buddies significantly more flexibility in procedure and substance, especially in sentencing, than he received in the district court that tried him in Paducah, Ky.

In part of Green’s appeal, his lawyers argue that his discharge was procedurally invalid, still making him eligible for court-martial. Green also says Congress unconstitutionally delegated its power to define crimes and set punishments to the executive branch when it enacted a statute the government says gives it the authority to try his case in a civilian court.

Green’s case and a handful of others came about because of a gaping jurisdictional hole left by the U.S. Supreme Court in a 1955 decision and unforeseen consequences Congress created 45 years later when it attempted to plug the hole.

Though the military had used courts-martial against civilians, the justices ended the practice, holding that at the time courts-martial deprived civilians and former service members of the constitutional safeguards afforded other citizens in Article III courts established by the Constitution. That meant that the United States had to look to host governments to pursue crimes committed by military members, their families and the legions of civ il ian contractors who regularly accompany U.S. forces overseas.

But some foreign governments didn’t want to get mixed up in such matters, especially if it meant prosecuting offenses—though committed within their borders—that involved only American defendants and victims. Some crimes went unpunished.

Congress got around to filling the void in 2000 with the Military Extraterritorial Jurisdiction Act, which extends civilian criminal jurisdiction to nonmilitary defendants and also covers crimes committed by Americans against foreigners. Critics of the act not only complained that such offenses lack meaningful links to American interests, but that U.S. civilian juries are ill-equipped to second-guess decisions that were made in the heat of battle.

But the outcome of Green’s case may say less about the Constitution and more about complaints that civilian jurors are neither willing nor able to distinguish just plain vicious—yet still ordinary—crimes from acts that emerge from chaos on the battlefield.

For example, a platoon sergeant and Green’s team leader were killed near the same checkpoint Green and the others manned. Though Green told stress team members he “wanted to kill all Iraqis,” they gave him anti-psychotic medication and sent him back to the checkpoint.

While he left with an honorable discharge, military mental health professionals also had diagnosed him with a “personality disorder,” which court documents didn’t detail.

“They were put in a very vulnerable position, and bad things happened,” Wolff says. “It was a perfect storm. … They just felt like they were waiting for their day to die. It wasn’t if—it was when.”

The jurors didn’t buy that “fog of war” stuff. They took just 10 hours to convict Green on 16 of the 17 counts he faced.

In another case, military and civilian juries alike were able to cut through the fog. Jurors in both systems acquitted Marine Sgt. Jose Luis Nazario Jr. and Cpl. Ryan Weemer, charged with murder in the killings of four unarmed Iraqi men in November 2004 during the battle of Fallujah, one of the war’s bloodiest.

The two, along with a third Marine, Sgt. Jermaine Nelson, were assigned to clear out homes where insurgents may have hidden. Shots rang out from a nearby house, killing one of the squad members. When they went inside to investigate, the Marines found the men. One witness told investigators the men raised their hands above their heads and told the Marines they had no weapons.

Though accounts vary about what happened next, all four Iraqis were shot to death in the house, and the three Marines were charged with murder. Nazario said he received orders to kill the men through a radio call, and witnesses recounted that he shot one himself. Weemer said he shot one Iraqi in self-defense after the captive lunged at him, then shot a second man in another room. Nelson finished off the fourth with a bullet to the back of the head.

Nazario, like Green, had already fulfilled his service commitment to the Marine Corps and thus was to be tried in a civilian federal court in Riverside, Calif. Wee mer also had been discharged but had four years of reserve duty remaining in his contract with the Corps, so the Marines recalled him to active duty and stationed him at nearby Camp Pendleton, where he faced his court-martial.

Nelson pleaded guilty to dereliction of duty in a military court. In exchange, prosecutors dropped murder charges and Nelson received a 150-day suspended jail sentence and a reduction in rank to lance corporal, though he still was honorably discharged.

But a killing doesn’t necessarily amount to murder. And who better to decide that than a jury of eight military officers? The panel acquitted Weemer.

“The military members understood, so I didn’t have to belabor the point,” says Weemer’s lawyer, Paul L. Hackett of Cincinnati. “They’ve all been in combat, and they feel bad about it. The members were offended. They were insulted. They were not impressed with the investigation.”

Nor were civilian jurors. Nazario was the first U.S. service member sent to trial under the Military Extra territorial Jurisdiction Act for crimes that occurred while he still was a Marine. But the civilian jury that heard his case acquitted him.

Defense lawyer Kevin B. McDermott, who practices in Tustin, Calif., says it didn’t hurt to try the case in a conservative area of California. “We weren’t dealing with the Malibu crowd, I can tell you that.”