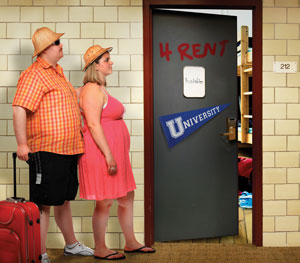 Forget a ramen noodle diet or digging for coins in the couch cushions. Some thrifty college students are setting their sights higher—offering their dorm rooms on the lodging rental site Airbnb to make some quick cash.

Examples recently making headlines include students at King’s College in New York City and Emerson College in Boston. In each case, university housing administrators put a stop to the rentals as soon as they caught wind of them.

At King’s College, a guest-only policy quickly came under review and had restrictions added to it. Emerson requested the enterprising student, Jack Worth, take his listing down. A Change.org petition with more than 500 signatures defending Worth’s “honest, entrepreneurial endeavor” says the school is “levying several charges of misconduct against him, which could result in disciplinary action as extreme as his dismissal.”

The hashtag #FreeJackWorth had a social media moment earlier this year, when stories about the student ran in the Boston Globe, Washington Post and USA Today. When Airbnb learned about the story, it refunded the $150 automatic charge Worth incurred for canceling after guests had booked his room. The company’s chief technology officer voiced his support in a tweet to Worth that read: “Don’t forget, dorm-room businesses were forbidden at Harvard; then Facebook was born on campus. Great ideas eventually win.”

But while these ideas may seem resourceful and bold, they’re often illegal. Renting out a dorm room would typically be considered a violation of the housing contracts at most college institutions, where safety and security are taken very seriously, according to Emily Glenn, a representative of the Association of College & University Housing Officers-International.

“The specifics can vary from institution to institution, but generally, students’ housing contracts forbid subleasing,” says Glenn. “As with other contracts, a housing contract is legally binding. Many institutions also request students register any guests who will be sleeping overnight in the residence, and that students accompany their guests at all times.”

Airbnb encourages listers to “read your lease agreement and check with your landlord if applicable,” but it does not require them to provide proof that short-term rentals are permissible. And users of the site can select “dorm” from a list of property types (which also include bed and breakfast, castle, house and treehouse) when searching for options.

“The cases that have been in the news are high profile, but as far as I know, our members don’t consider subleasing on [Airbnb to be] a major issue,” Glenn says. “I think a student choosing to do this is still rare, and most cities’ rental or hotel markets are such that a student would find it hard to get any takers for part of a residence hall room. New York City, obviously, is an exception.”

So, it seems, are other major cities where tourism thrives and affordable lodging is at a premium. A search of Airbnb shows dorm rooms being offered in San Francisco and Philadelphia, among other large metropolitan areas.

This article originally appeared in the September 2016 issue of the ABA Journal with this headline: “Dorm BNB: Enterprising college students are trying to rent out their rooms online.”

Previous:
How much money can you make in different practice areas?

Next:
Do memes violate copyright law?