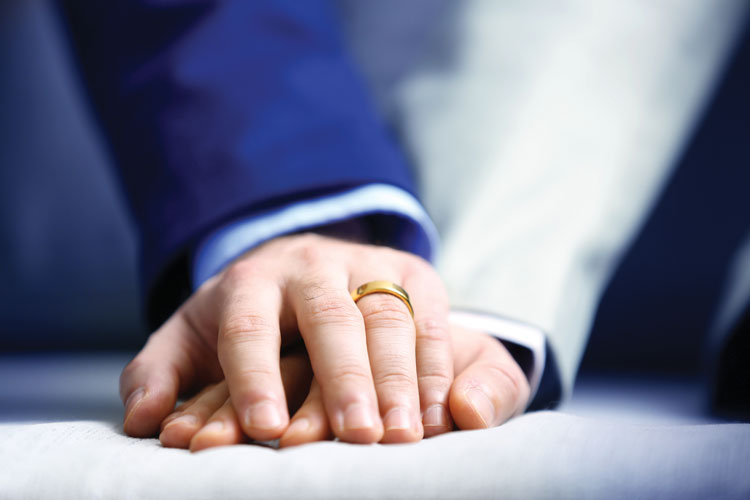 Alabama resident Gary Wright II was among the gay rights activists who waged a hard-fought campaign for the right to marry in the state.

The 46-year-old Navy veteran was part of a class of plaintiffs who obtained an injunction from Senior U.S. District Judge Callie V.S. Granade in Mobile, who ruled in early 2015 that the state’s refusal to allow same-sex couples to marry violated the constitution. In June of that year, the Supreme Court ruled on Obergefell v. Hodges, which invalidated all state bans on same-sex marriages on constitutional grounds.

But the battle in Alabama didn’t end with that decision. Instead, probate judges in at least seven of the deeply conservative state’s 67 counties are simply refusing to issue marriage licenses to any couples, same-sex or heterosexual. Instead, those judges tell people who want to get married to go to other counties.

For Wright, who faced death threats after he sued for the right to marry, the development is especially vexing.

“There’s no reason to inconvenience us like that,” Wright says.

He adds that, despite the court battles, same-sex couples still haven’t been able to achieve equality in the state. “It breaks my heart because we were so close, and the rest of the country has moved on,” he says.

Faced with the impasse, lawmakers in the state are considering revamping the marriage procedure by abolishing licenses altogether.

Instead, a bill proposed by Republican Sen. Greg Albritton would require couples who wish to marry to file an affidavit with their local counties.

“If we don’t change it, there will be some additional lawsuits out there,” Albritton says. “I would just as soon solve it ourselves rather than go through an additional, costly court battle.”

Supporters argue that the bills could protect public officials who say their religious beliefs prevent them from signing their names to same-sex marriage licenses. The most famous example is Kim Davis, the clerk in Rowan County, Kentucky, who was jailed for five days for refusing to comply with a federal judge’s order to issue marriage licenses to same-sex couples.

Albritton’s bill (SB 13) would require all couples who wish to marry—heterosexual and same-sex—to sign affidavits stating that they meet the legal requirements for marriage, including that they’re willing, competent, of age (either 18 or 16 with a parent’s consent), and not married to anyone else. The couples would then record the affidavits with the probate judge, who would be mandated to accept them—provided the affidavits include all required data. At that point, the couple would be married.

The bill would also abolish a requirement for a ceremony. Currently, probate judges may solemnize marriages. The ones who have stopped issuing licenses also don’t perform ceremonies for any couples in the state.

Since 2015, Albritton has introduced the bill every year, but it hasn’t passed despite widespread support in the state Senate, where lawmakers this year voted 19-1 in favor of the measure.

The senator says he plans to reintroduce the bill next year, despite the prior lack of momentum. “We have a difficulty, and I’m trying to find the easiest, simplest way to resolve it,” Albritton says. “Change is difficult, especially when you’re dealing with an emotional, traditional matter such as this.”

Albritton says he got the idea from a similar bill proposed in Oklahoma in 2015, which passed in that state’s House but stalled in the Senate. The proposal has drawn backing from some social conservatives, such as Washington County Probate Judge Nick Williams, who hasn’t issued any marriage licenses or performed ceremonies in more than three years.

“It gets us out of the position of having to participate in something we totally disagree with,” Williams says.

Even with Albritton’s bill, county officials would have to participate in the marriage to the extent of filing the affidavit. But some opponents of same-sex marriage say that filing a document is different than signing a license.

This article was published in the July 2018 ABA Journal magazine with the title "Marriage Refusals: Despite the Supreme Court decision invalidating bans on same-sex marriage, some states are still reluctant to go along."