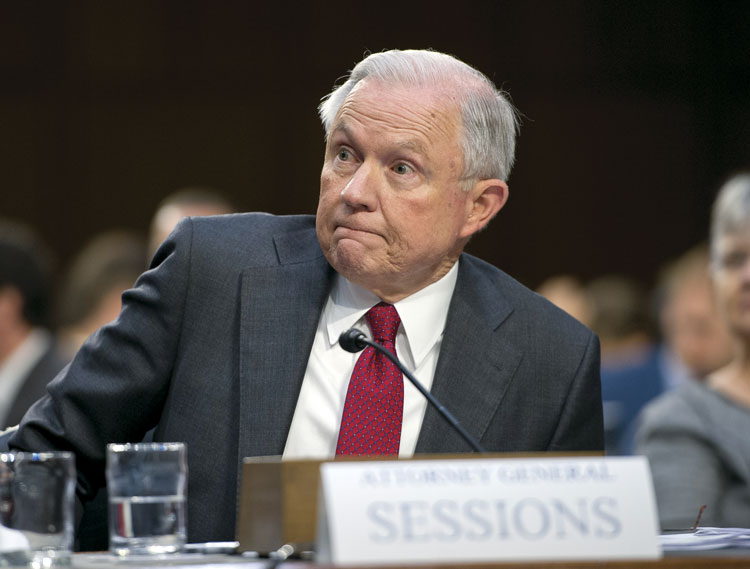 Sessions has pushed against the legalization of marijuana, a political hotbed topic. Photo of Jeff Sessions by Ron Sachs/Picture-Alliance/DPA/AP Images

While Sessions’ initiatives as attorney general thus far have hammered hardest and most at crime, he also has acted on his strong views concerning enforcement of civil rights laws, raising concerns with many and pleasing a significant portion of Trump’s base. As with criminal law enforcement, he has reversed significant civil rights policies adopted by the Obama administration.

In February, the DOJ pulled back from supporting the key aspect of a lawsuit it brought in 2013, dropping its claim that Texas’ voter ID law discriminated against minorities. (Subsequently, Trump created the Presidential Advisory Commission on Election Integrity to investigate allegations of voter fraud in U.S. elections, with Kris Kobach, a leader in efforts backing voter ID laws, as its vice chairman and operational leader.)

Over the years, Sessions has opposed various gay rights measures, such as same-sex marriage. Shortly after he was confirmed as attorney general, the DOJ pulled back from supporting Obama administration policy protecting transgender students in choice of restrooms in public schools. Then in July, Justice intervened in a federal lawsuit in New York to argue that Title VII does not cover sexual orientation in employment discrimination, and that only Congress, not the courts, can give the law such reach.

The messages have been clear: Sessions, as the chief legal officer in the Trump administration, is pushing his brand of conservatism.

When he was in the Senate, Sessions embraced evidence-based solutions in criminal justice—when approached in the right way. Laurie Robinson knew that way.

Robinson was twice appointed to run the DOJ’s research and statistics arm (during the Clinton and Obama administrations) to help with criminal justice. As assistant attorney general in charge of the Office of Justice Programs from 1993 to 2000, Robinson says she worked closely with Sessions on several matters, both in Washington and numerous times in Alabama.

They became close enough that Sessions spoke at Robinson’s farewell event at the DOJ in 2000, as presidential administrations changed, and again on her behalf when she was sworn in for the same job in 2009.

They first met when Robinson was tasked by U.S. Attorney General Janet Reno with creating the Center for Domestic Preparedness, a pre-9/11 project launched in 1998 for training emergency responders, particularly in weapons of mass destruction. It is based in Anniston, Alabama, and Robinson spent a lot of time there with Sessions and DeKeyser, his chief of staff.

“I always found him to be very straightforward,” says Robinson, a professor in the criminology, law and society department at George Mason University. “He said what he thinks and, right now, he’s saying what he thinks too.”

That qualified last phrase indicates Robinson’s concern with some of Sessions’ efforts as attorney general. She had found him very supportive of her science-based criminal justice efforts while she ran the Office of Justice Programs, and he chaired the oversight subcommittee that monitored her agency for the Senate Judiciary Committee.

“He was interested in smaller, more effective government, and I did briefings for him, he did hearings, and we worked closely together,” Robinson says. She sold him on the OJP’s research, development and evaluation arm, the National Institute of Justice.

“I think I pitched it to him in part as important for evaluating programs to see if they’re effective and if federal money should go to them,” Robinson says. “He liked that idea of seeing what works and what doesn’t. He really got behind it.”

So much so that when Lynch was confirmed in 2010 as head of the office’s Bureau of Justice Statistics, which crunches and analyzes crime data, Sessions invited him to his Senate chambers to talk.

“He was very respectful of data at the time—and very interested in immigration and crime, with strong opinions,” says Lynch, now a criminal justice professor at the University of Maryland.

But Sessions has not been so friendly to evidence-based research as attorney general. In April he disbanded the DOJ’s National Commission on Forensic Science, composed of approximately 30 outside advisers, including scientists, heads of crime labs, prosecutors, defense lawyers and judges. The Obama administration created the commission in 2013 after the National Academy of Sciences reported about problems with crime labs, examiners and researchers analyzing evidence in criminal cases. The studies pointed to control of the labs by law enforcement agencies as a key problem.

Sessions said he would replace the commission with an internal DOJ senior forensic adviser and crime task force, just the kind of arrangement criticized by the National Academy of Sciences.

“I think dropping the commission bodes poorly for the future,” Robinson says. “It looks like part of the whole Trump administration approach toward science.” 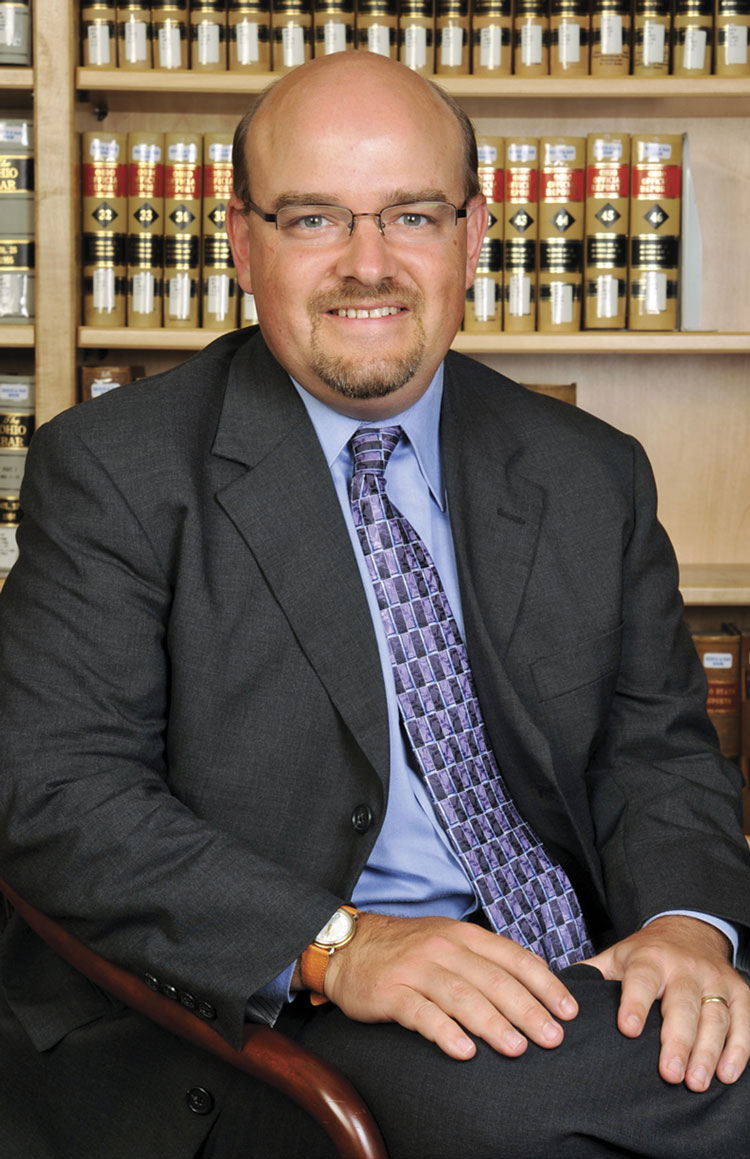 Douglas Berman: “You’ve got to understand who he is and what he cares about.” Photo courtesy of Ohio State University, The Moritz College of Law

GOING WITH THE GUT

Whatever the president’s reasoning for eschewing scientific data, Sessions tends to go with his gut instincts, developed in rural and then urban Alabama over a lot of years and honed in Washington, D.C. In matters of crime, he has particularly strong views about recidivism.

In a study of prisoners released in 30 states from 2005 to 2010, the DOJ’s statistical arm found that more than 75 percent of those released committed another crime within five years, and 82 percent of those who stole property went back to their old ways.

Several social and economic factors are at work in leading many people to commit crimes and to return to crime when re-entry into society isn’t successfully carried out. But Sessions’ greatest concern is crime victims.

“Sessions looks at the crime rate, which affects everyone, more than the incarceration rate,” says William Otis, a former chief of the appellate division in the U.S. attorney’s office for the Eastern District of Virginia and former special White House counsel for President George H.W. Bush. “There’s a big divide in the country on that, and he primarily views criminals as victimizers.”

Sessions’ mindset is perhaps captured in this recounting of his approach as U.S. attorney in Mobile in the 1980s and early ’90s by his longtime assistant aide-turned-chief of staff, DeKeyser.

“Jeff knew it was the petty criminals who made life difficult,” DeKeyser says. “The ones who steal your TV. If a criminal otherwise didn’t have much of a serious crime but was a repeat offender, if they had a gun, he’d find a way to make a federal case out of it and add an automatic five years. With state charges, they would have gotten out pretty quickly.”

The event line for the Trump administration has accelerated at a pace never seen before, with months and years of significant news and change happening almost weekly. And major breaks from custom and policy have become routine. It has thus far provided Sessions with an almost perfect laboratory for his desire and design to take us back to “better times.”

This is to his delight—as we learn new lessons about lessons learned.