Breyer: Civics an Issue in Blue and Red 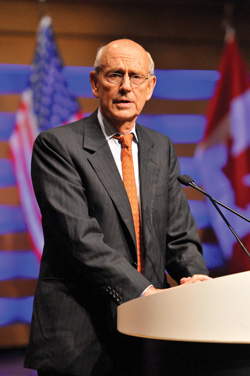 U.S. Supreme Court Justice Stephen G. Breyer says he has seen the evidence that America is be coming increasingly polarized, and it’s colored in red and blue.

Breyer tells of looking at two maps, one from 1976 and the other from 2011. Counties where elections were a “landslide” in favor of either Democrats or Republicans were colored either blue or red. In 1976, the map was mostly white. In 2011, it was mostly blue and red.

One possible meaning, he said at an ABA Annual Meeting program, “is that more and more people are seeing those in the other county as the enemy.” To keep the country functioning, he said, children need to understand that the U.S. Constitution allows people of opposing views to work out their differences.

Breyer appeared with retired Supreme Court Justice Sandra Day O’Connor to stump for a solution: civic education in schools. At least half the states no longer require civic education, but Florida is bucking the trend with a new law mandating the subject in high schools.

Statistics highlight widespread ignorance. One poll, for example, found that 32 percent of adults thought U.S. Supreme Court decisions on the Constitution could be appealed.

O’Connor said lawyers are natural leaders who can encourage states to bring back civic education. They can also volunteer to visit the schools to lead civics discussions.

Most lawyers have read the Constitution, O’Connor said, “and if they haven’t, at least they’re equipped to.” 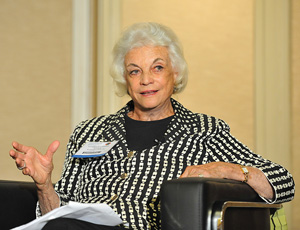 When O’Connor was a child, she left the Lazy B Ranch with her parents to go to the courthouse to watch closing arguments in criminal trials. Breyer endorsed bringing trials into the home, saying they could be televised without controversy by avoiding jury and criminal cases.

What about televised oral arguments? In Canada, Breyer said, cameras are allowed in the high court. Then he offered the counterargument: “But people say, ‘That’s Canada. Everything works in Canada.’ ”

Outgoing ABA President Stephen N. Zack introduced the justices and told a personal story. When he came to the United States from Cuba in 1961, he said, the Cuban constitution was identical to the U.S. Constitution. Education and an independent judiciary are key to preserving freedom, he said: “The words alone do not protect us.”

The program, “A Conversation on Civic Education,” was sponsored by the ABA Commission on Civic Education in the Nation’s Schools. The commission has ready-to-use curricula at the ABA website for lawyers who want to participate in “civic and law academies” for middle school and high school students. O’Connor helped develop an online education program called iCivics with games such as “Do I Have a Right?”