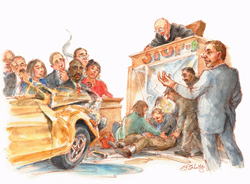 By popular demand, Angus and judge Horatio Standwell were once again the headliners at Wednesday night’s bar association program. Their topic was final argument.

By coincidence, law professor Vince Warbler, author of the privately published Killer Kross, has just come out with another book aimed at litigators: The Seven Secrets of Scintillating Summations. So it was no surprise that he arrived early with a boxload of his latest work.

At 7:30, Angus stood up and said, “Judge, it’s your turn to go first, so I get to ask the opening question. What should we be doing in final argument?”

“Not everyone will agree with this,” said Judge Standwell, “but for my money what you shouldn’t do is waste your precious time—typically limited to a half- hour or 45 minutes—giving a summation of the case.”

“A lot of people are looking puzzled, judge,” said Angus. “What’s wrong with a summation?”

Standwell smiled. “The very word leads thousands of lawyers to throw away a great opportunity in every case they try,” he said. “A summation typically includes rattling off a list of the witnesses in the order in which they testified and summarizing what each one said. It typically includes brief comments on their testimony and the contents of some of the documents.

“It’s not very persuasive—if at all. But it’s what many lawyers do in every case they try.

“Final argument is different. It’s not a superficial summation—a list of who said what. It’s your opportunity to talk to the judge and jury about the moral imperative in the case. It’s when you focus on what you’ve proved, what it means and how the other side has fallen down.”

“Let me take that thought a little further,” said Angus. “The ‘big idea’ in any trial should be the theme behind your entire case—the unifying concept aimed at convincing the judge and jury that what you say is what actually happened. That theme has got to mesh with their values, their sense of right and wrong. It’s got to lead them to the realization that here is a wrong that needs to be undone or a right that needs to be protected from the attack of your feckless opponent.

“And the toughest part of this job is that you can’t just stand there and tell the judge and jury how to think about what they’ve seen and heard for the past days or weeks.”

“Why not?” said Judge Standwell. “I hear lawyers in my courtroom tell juries and me how to think about their cases all the time.”

“Do you find that persuasive?” said Angus. “Does it guide your thinking in how to reach a decision?”

“I didn’t say that,” said Standwell.

“Which takes us to the central point,” said Angus. “Final argument is your opportunity to reassemble the evidence into a powerful group of facts that will impel the judge and jury to reach the right conclusion—your conclusion—on their own. That way it becomes their idea—not yours. And people like their own ideas. So the real job of final argument is not to argue, but to put the story together so the judge and jury will want you to win.”

“If you could bottle that idea as the ‘elixir of persuasion,’ ” said Ernie Romero from the third row, “I’d buy a dozen six-packs of it right now.”

Everyone laughed, and Judge Standwell said, “By the way, there are some lawyers who try to find the key to persuasion in a six-pack or a big bottle, but none of them seem to be here tonight.

“Anyway, let me take Angus’ point a little further,” said the judge. “Don’t even try to tell the judge and jury how to think. Stay away from adjectives and adverbs—especially words of criticism, judgment and condemnation. Put the case together with facts, not verbal pushing or arm-twisting. Whatever you do, don’t exaggerate. The last thing you want to do in final ar gu ment is argue. It’s the same idea that’s at the heart of good writing: Show, don’t tell.”

Standwell turned to Angus and said, “Why don’t you give us a little of that final argument you and I were talking about at dinner?”

“All right,” said Angus, picking up a worn trial transcript. “I sat through this entire case about 10 years ago. The firm I was with then was interested in hiring the young plaintiffs lawyer who tried it. While this is just a few minutes of his final argument, I think you’ll see why I liked it.”

Then Angus started to read.

“Folks, before we get started, let me tell you why I have this little stack of papers here on my table. I’m going to be talking about what a number of witnesses told us during the trial, and I don’t want to make a mistake about what any of them said. So I asked the court reporter to type up some of their most important testimony.

“We’re going to start at the scene of the crash—what the defense lawyer has been calling an ‘accident.’ It’s the intersection of Wyandotte Boulevard and High way 622. It’s 3:30 on the afternoon of April 22—a beautiful day. There are two shopping centers at the inter section: one on the east side of Wyandotte, the other on the west.

“Mike Krupanski is standing on the southwest corner, waiting to cross Highway 622 to join his wife, Myra. She’s in front of the Bay Village Shopping Center, and she sees everything happen. She has just called Mike on his cellphone to tell him she wants to show him a spring coat she saw in a store window.

“After the light on Wyandotte turns green, but before Mike can step off the curb, a brand-new, gold Mercedes-Benz sedan going west on Highway 622 runs the red light protecting the Wyandotte traffic. According to four bystanders—Allen Jackson, Sharon Garcia, John Krueger and Nancy Foster, all experienced adult drivers—the gold Mercedes is going between 45 and 50 miles per hour when it enters the intersection. And when it reaches the middle of the intersection, the driver suddenly tries to turn left.

“But the gold Mercedes doesn’t make the turn. It starts to skid out of control and slides into the curb right at the southwest corner of the intersection—still going 35 to 40 miles per hour when it lurches over the curb and skids onto the sidewalk—right where Mike Krupanski is standing.

“The gold Mercedes slams into Mike, tossing him onto the top of the hood and carrying him back toward the Stop-n-Pay Drug Store at the corner. His pelvis and abdomen are crushed when he is sandwiched between the brick wall of the building and the front of the Mercedes.

“Then the driver, Helen Margolis, jumps out of her car and runs to the front of the car. She says to Mike, ‘Why didn’t you get out of my way? Couldn’t you tell that something went wrong with my car, causing it to go out of control? Didn’t you hear me blow my horn?’

“Allen Jackson, one of the four folks who saw how fast the defendant was going, says, ‘Lady, you never blew your horn. You didn’t even put on your brakes.’

“Helen Margolis doesn’t respond. She just walks away from the crowd.

“Then a group of people gather around the front of the gold Mercedes and ask if Mike is all right, while others roll the car back far enough for him to have room to lie down.

“Someone has already called an ambulance and the police. You can hear their sirens approaching the scene. That’s when someone in the crowd says, ‘Make room for this lady. She’s the man’s wife.’

“ ‘Mike, are you all right?’ says Myra, putting her head next to his.

“ ‘You just put your head in my lap and rest,’ says Myra, holding Mike’s hand. ‘The ambulance is already on the way.’

“After a minute, Mike says, ‘Myra, you know that coat you wanted me to see?’ Myra nods, and Mike says, ‘I want you to get it.’

Angus sat down. For almost a minute you could hear the proverbial pin drop.

Finally, Ernie Romero said, “That was magic. How did you do it?”

“It’s one of the best examples of telling the story I’ve ever heard,” said Judge Standwell. “You can see why I wanted Angus to read it.”

That’s when Vince Warbler picked up his box of books and proceeded to walk out the side door, muttering “Humbug.”

“I guess telling the story in the present tense is not one of the ‘seven secrets of scintillating summations,’ ” said Ernie.