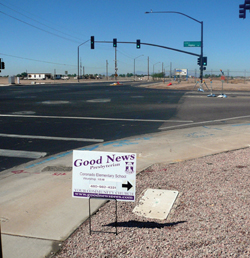 The Good News Community Church in Gilbert, Arizona, would never be mistaken for a Christian mega-congregation.


The church has 25 to 30 regular adult congregants, plus about 10 children, and no permanent home. It has borrowed space in elementary schools and senior centers for Sunday services for the past several years. Still, Pastor Clyde Reed and his flock seek to observe a biblical command by Jesus to "go and make disciples of all nations" by inviting anyone in their community to attend.

To that end, the church has placed small signs in the public right of way to direct traffic to the services, putting the signs up early Saturday and removing them after services are over on Sunday.

The church's signs are now figuratively pointing to the U.S. Supreme Court, where the case of Reed v. Town of Gilbert is a potentially significant test of the First Amendment and government regulation of speech. It will be argued Jan. 12.

As early as 2005, Gilbert enforcement officers cited Good News for violations of the town's sign code, which at that time regulated "religious assembly temporary directional signs." In 2007, Reed and the church sued the 30,000-resident Phoenix suburb, alleging that the code targeted them.

The suit led to an injunction, and the town adopted a new ordinance in 2008 with multiple categories for noncommercial signs. (Commercial signs generally must have a permit.) Among the categories are those for political signs (supporting candidates or ballot measures), ideological signs (promoting noncommercial messages or ideas), and "qualifying event" signs—a "temporary sign intended to direct pedestrians, motorists and other passersby to … any assembly, gathering, activity or meeting sponsored, arranged or promoted by a religious, charitable, community service, educational or other similar nonprofit organization."

The church's directional signs fall under the qualifying event category. The problem, as the church sees it, is that such signs must be smaller than political or ideological signs and may only be displayed from 12 hours before the event until two hours after, in contrast to unlimited duration for ideological signs and more than four months before an election for political signs.

The town is making content-based distinctions in its sign code, in violation of the First Amendment, the church contends.

"You can't treat certain speech as better or worse than other speech," says David A. Cortman, an Atlanta-based lawyer with the Alliance Defending Freedom, a religious legal organization representing Reed and the church. He adds that the town "has treated the church's speech worse than other types of speech, and that's what has created the constitutional violation here."

Michael Hamblin, the town attorney of Gilbert, says the town never targeted the Good News Community Church (which also refers to itself as the Good News Presbyterian Church) with its sign regulations. The qualifying event category is meant to allow groups holding a temporary event, be it a church service or a 5K race, to help the public get to the event.

"Organizers can put up signs 12 hours before the event," Hamblin says. "It's a temporary directional sign, and that serves a town function. We don't want those signs up for long periods of time."

A federal district judge in Arizona and the 9th U.S. Circuit Court of Appeals at San Francisco sought to make sense of Gilbert's sign regulations in light of precedent on content-based speech limitations generally and municipal sign rules specifically.

In its first look at the case, in 2009, the 9th Circuit remanded the case to the district court, concluding that "Gilbert has adopted a sign ordinance that makes one's head spin to figure out the bounds of its restrictions and exemptions."

The district court then upheld Gilbert's 2008 rules, and the 9th Circuit affirmed in 2013. The appeals court panel ruled 2-1 to uphold the town's distinctions among temporary signs, saying that the town "did not adopt its regulation of speech because it disagreed with the message conveyed."

The panel majority also accepted the town's argument that political and ideological signs have more First Amendment value than the church's invitation signs.

The church asked the Supreme Court to resolve a circuit split over the role of a governmental motive or purpose in weighing whether a sign code is content-neutral. The church argues that Gilbert's sign regulations fail the content-neutrality test because the town grants favorable treatment to political and ideological signs.

In its brief, Good News displays a photo of political signs sprouting on lawns, which it argues undercuts the town's safety and aesthetic justifications for its rules.

"How does the directional message on the [church's] sign affect safety or aesthetics in any way?" Cortman wonders. "It doesn't."

"These are not regulations that target viewpoints," says Philip W. Savrin, an Atlanta lawyer who is representing the town in the high court. "If Gilbert doesn't prevail—if all these restrictions are subject to strict scrutiny—many jurisdictions are going to have their sign regulations declared unconstitutional."

Lisa Soronen, the executive director of the State and Local Legal Center, a Washington, D.C., group that advocates for local governmental interests, says the town of Gilbert's sign regulations are not uncommon across the country.

"Every city has a sign code," says Soronen, whose group is part of an amicus brief on Gilbert's side joined by several organizations, including the National League of Cities, the U.S. Conference of Mayors and the National Association of Counties. Those groups would like to see Gilbert's approach upheld, though they would also settle for more First Amendment clarity from the justices, she says.

Brian J. Connolly, a former city planner who is now a private lawyer in Denver, agrees that a ruling against the town of Gilbert's regulations would throw many other municipalities' sign codes into constitutional limbo.

Connolly says it's well-settled that aesthetic regulation of signs by local governments is necessary. But even he believes that Gilbert's rationale for the distinctions in its sign code "is a hard one to articulate."

"This case is getting at a real division among the courts of appeals on the meaning of content neutrality," Connolly says.

The Good News Community Church has attracted amicus briefs from the nation's top conservative and religious legal organizations, which—like the Alliance Defending Freedom—are concerned with sign regulations that may harm a church but are also battling content-based regulations in other situations and venues, such as children's schoolwork and private religious memorials.

Leslie Kendrick, a law professor at the University of Virginia, notes that some scholars have criticized what they perceive as a lack of coherence in the Supreme Court's larger jurisprudence on content- and viewpoint-based neutrality and discrimination.

"I think the court has been more coherent in this area than it has been given credit for," says Kendrick, who has studied the area. "The Roberts court has made a concerted effort to formalize these rules."

"The court has found subject-matter regulations to be suspect," adds Kendrick, who isn't involved in the case and says that Gilbert's rules appear to be subject-matter classifications.

"The town may have reasons for doing this that aren't invidious," she says. "The court could say we really mean it when we suggest subject-matter regulation is a constitutional problem."

But if the justices find that "this is something special going on here, and [Gilbert's code] isn't content discrimination, then what they will have created is a special rule about signs—and that would undermine their formalistic approach in other areas."

"Local governments are caught between a rock and a hard place" when it comes to regulating signs, Kendrick says. "They can't regulate with a blunt instrument," but when they try to regulate signs "with a scalpel," as Gilbert did in its code, she says, "it looks suspicious."

This article originally appeared in the January 2015 issue of the ABA Journal with this headline: "Signs of the Times: Justices consider whether a town code is bad news for the Good News congregation."