By Pamela A. MacLean 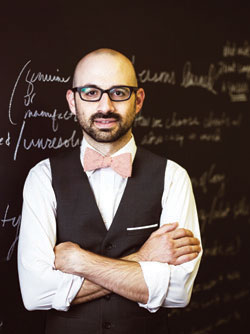 Aaron Morris is looking forward to a surge in cases. “The more LGBT refugees we can help, the better.” Photo by Adam Lerner.

A wave of aging LGBT baby boomers is stirring a sea of complex legal questions over nursing home care, inheritance and even potential guardianship abuses, thanks to the decision, which overturned the Defense of Marriage Act and gave federal recognition to state-sanctioned same-sex marriage. And DOMA’s death knell, coupled with promised immigration reform by Congress, will create an unanticipated boom in demand for immigration law specialists.

“There are tens of thousands of aging services providers across this country who have never said the word lesbian,” and that creates the need for broad-based education, warns Hilary Meyer, director of the New York City-based National Resource Center on LGBT Aging.

Windsor opened the door to a host of rights previously foreclosed to LGBT elders. But it also created new issues that elder care providers likely have never considered.

To name just a few, same-sex couples will be able to share rooms, and HIV-positive elders will have protection against eviction from a nursing home. Staff will need to be sensitive to how transgender residents choose to dress or be groomed.

Windsor will also present an array of issues in pensions and finances for estate planners. But beyond that, practitioners may be called on to address guardianship questions even if they have drafted durable powers of attorney for LGBT clients, says Nancy J. Knauer, director of the Law & Public Policy Programs at Temple University’s Beasley School of Law.

LGBT elders are more likely to be single, childless and live alone. They may rely on a “chosen family” and be estranged from their original family. Accusations of elder or financial abuse and undue influence may be used against a same-sex partner or chosen family.

“We have a new legal creep in undue influence law, which is a claim traditionally brought after you’re dead. Now it is being brought while you’re alive,” Knauer says. It can be used by relatives to force a same-sex partner out of the home. And because it is a civil action, like a domestic violence claim, it requires only a preponderance of the evidence to get someone out of the house.

Facilities will have to learn to be culturally sensitive to those issues in the years to come, Knauer warns.

Meanwhile, the increased workload from the potential rush for immigration help “is going to be terrifying,” says Aaron Morris, senior staff attorney with Immigration Equality.

Windsor opened America’s doors to LGBT immigrant marriage. But it isn’t simple, nor is marriage where the legal quandaries end. Just one proposal of immigration law reform would drop the one-year limit for seeking asylum in the U.S., and foreign persecution for homosexuality is a covered category justifying a grant of asylum.

“Half the people we turn away on asylum requests is because they did not make the deadline,” Morris said at a Lavender Law session on immigration. “If suddenly all the people we’ve turned away for 10 years can apply tomorrow, my God,” he said, later adding that “this is a really, really good thing from my perspective. The more LGBT refugees we can help, the better.”

Prior to the DOMA decision, “we estimated 36,000 couples with an immigrant partner and the other a citizen. But in the first week after Windsor 1,800 calls went to immigration officials, and they just keep coming,” Morris says.

Beyond asylum rights will be a welter of questions on recognition of citizenship rights for children of same-sex couples. A same-sex couple married overseas could not bring a child to the U.S. before Windsor. But in surrogacy cases, the U.S. State Department considers whose sperm and egg created the child born overseas, Morris says. Even if a U.S. citizen gives birth overseas as a result of donated egg and sperm, the State Department views the child as born out of wedlock.

“The weirdness doesn’t stop here,” he says. “If the U.S. citizen is not the genetic parent, but the same-sex spouse is, the couple may petition to bring the child into the U.S. as a stepchild.”

Even same-sex marriage is no simple issue. Participants in a packed workshop during the August Lavender Law Conference peppered the panel with questions on potential ways to run afoul of marriage to noncitizens.

“We’ve already talked about 17 ways to get screwed in the marriage process,” said Keren Zwick, managing attorney for the National Immigrant Justice Center’s LGBT Immigrant Rights Initiative in Chicago. All these potential pitfalls point to the importance of asylum, she said.

Getting into the U.S. to marry requires a same-sex couple to prove the relationship exists, which may be difficult in countries hostile to homosexuality. It is now important to show some cases where same-sex couples need to be treated differently, warns Scott Titshaw, associate professor at Mercer University law school in Macon, Ga. For example, Titshaw notes, if an Egyptian applies for a fiancé(e) visa for a same-sex marriage in the United States, the consulate should not tell the family their child is gay and coming to the U.S. to marry.

Next:
Product picks from iPhone JD and the Droid Lawyer