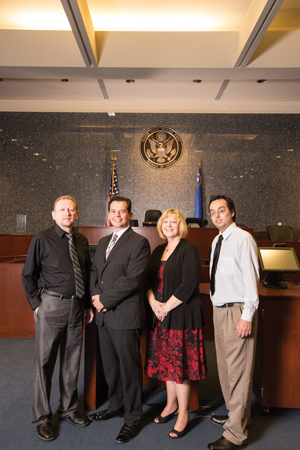 Cindy Jensen and her Nevada federal court team are helping put the federal court system on a paper-free path. Photo by Jeff Green.

Thanks to a federal clerk tired of a deluge of paperwork, lawyers for low-income federal defendants are beginning to use a new electronic payment system that allows them to be paid more quickly.

The Criminal Justice Act eVoucher system saves attorneys the headache of running down fees for service the old-fashioned way: using shoe leather, photocopies and an ancient system of document exchange known as the U.S. mail. Developed by a team headed by Cindy Jensen, chief deputy clerk for the U.S. District Court for the District of Nevada, CJA eVoucher resembles the shopping checkout system of Amazon.com.

Essentially, lawyers log on, click through various tabs to input case information and trigger an eVoucher request, which bounces effortlessly around the Internet among the various court clerks who need to sign off on the payment.

All told, it’s a much more efficient approach than the old way, which often involved sending hand-scrawled requests through the mail to one court clerk after another. The new system also auto-computes, to the exact penny, payment owed to an attorney—a mundane and generally maddening task that previously had to be manually double-checked by court clerks, Jensen says.

Attorney Steve Hormel of Spokane, Washington, is one of the system’s first users and a big fan. “We get paid so much faster with eVoucher,” he says.

Hormel also greatly appreciates eVoucher’s ability to file for expenses incurred for private investigators, expert witnesses, expert evaluation services, paralegals and the like, which spares the need to make a separate request for those expenses to a judge.

Fortunately, even attorneys who consider themselves less than digitally savvy can quickly get up to speed with the assistance of online video training.

“The system is so much more efficient, we’re even able to make partial payments to attorneys who are working on longer cases,” Jensen says.

That’s also a radical improvement over the traditional approach, which often prohibited attorneys from filing for expenses on a seemingly endless trial until after the case concluded. That process, Jensen notes, could take years.

Begun as a test project in Jensen’s district, CJA eVoucher is in various stages of implementation at 52 federal courts. The goal is to have every federal court using the system by the close of this year, according to U.S. District Judge John D. Bates of the District of Columbia.

Once fully implemented, CJA eVoucher will handle electronic payments for more than 12,000 CJA panel attorneys and significantly reduce the administrative burden for everyone involved, says Bates, who oversaw the initial roll-out of eVoucher last year when he was serving as director of the Administrative Office of the U.S. Courts.

“It takes between two and six months to transition a court to eVoucher,” Bates says. Adds Jensen: “We deliberately designed the system so that it could be flexible and accommodate the different ways payments are made, court by court. Here in Nevada, we’ve been using the system for five years. So we had a lot of time to fine-tune it before it went national.”

This article originally appeared in the May 2015 issue of the ABA Journal with this headline: “eMoney in the Bank: Feds go electronic on payments for indigent representation.”