ABA president's goals focus on young people and the future 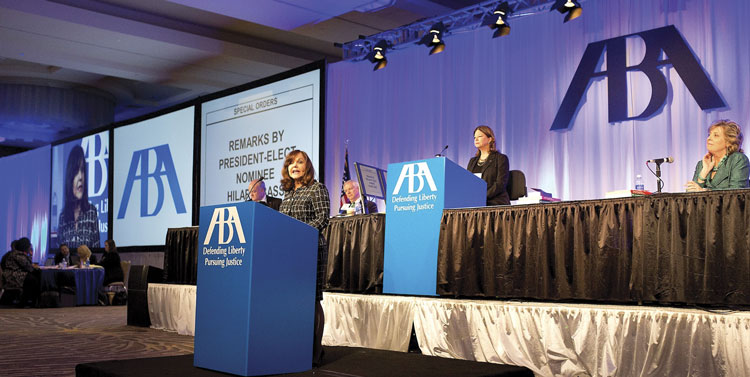 ABA President Hilarie Bass has had a long and successful career as a commercial litigator for Greenberg Traurig in Miami, where she serves as co-president. In one recent case, she was able to recover tens of millions of dollars for her construction industry clients from the Chinese manufacturers of defective drywall.

But her community service with organizations such as the United Way and her pro bono work have been just as impactful.

In 2010, as the pro bono attorney for two foster children, Bass helped bring an end to a Florida state law barring gays and lesbians from adopting children. At the time, although her young clients had been raised by gay foster parents, the couple could not formally adopt the children. Bass led the team that represented the brothers during the two years it took for the case to work its way through the courts.

“She had a passion for this issue,” said Judge Cindy Lederman of Florida’s 11th Judicial Circuit in a video that honors Bass for receiving the 2017 Judge Learned Hand Award from the American Jewish Committee. “I ruled that the law was unconstitutional, and she was the first to put on evidence from the child’s perspective, and how this related to the rights of the child, the permanency issues relating to the child, but also the well-being of the child.”

Bass’ experience in that case was foremost in her mind when she decided on a pro bono project for her presidency, which began at the close of the 2017 ABA Annual Meeting in New York City in August, and will last through the 2018 annual meeting.

“I found the experience of representing children incredibly inspiring, and it made me want to do more,” Bass says. “It is why I decided that the pro bono focus of my year will be homeless youth. There are 350 homeless shelters in this country with significant homeless youth populations, and my hope is that we can pair law firms, lawyer groups and bar associations with each of those homeless shelters. The goal is to make a commitment that we will provide at least one day a month of free legal advice to the homeless youth.”

According to Bass, there are about a dozen common legal needs experienced by homeless young people, such as accessing their birth certificates, re-entering school or applying for benefits. “There are recurring legal issues that would be relatively easy for a lawyer to resolve, but that might be overwhelming for a homeless youth to tackle without assistance,” she says. “Many times these simple legal problems can be resolved expeditiously and make a real difference in the ability of that child to move forward with their lives.”