In 2009, Matt Geller got a call from a friend who was part of the burgeoning Los Angeles food truck industry. The truck had been shut down for violating a local ordinance requiring bathroom access, and his friend was losing thousands of dollars.

Geller, a 2008 UCLA School of Law graduate, wasn’t a practicing lawyer (he wanted to pursue politics), but he had years of experience in the restaurant business and had also done a summer in a city councilman’s office.

Eventually, Geller determined that the shutdown order was bogus—and that bogus enforcement was common. “I got together with some food truck operators and listened to their stories, and they were all pretty bad,” Geller says. “There were regulations that were being enforced that no longer existed.”

And suddenly Geller was a leader in the food truck movement. In 2010, he co-founded the Southern California Mobile Food Vendors Association and started negotiating with cities over regulations—such as 10-minute parking limits—that hurt members’ ability to do business.

With help from the law firm of Dermer Behrendt and strategic advice provided by the libertarian-leaning Institute for Justice, Geller spent the next few years suing 13 of Los Angeles County’s 88 cities, challenging laws mandating how long food trucks may park or how close they may be to restaurants. 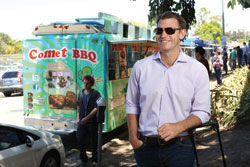 Geller says city officials often expressly justified their laws as designed to protect restaurants from competition—a rationale he rejects. And as he began to help food truck associations in other cities, he discovered that similar rules were in place across the country.

“When you look at Chicago’s law that you can’t park within 200 feet of a restaurant, what’s the public benefit there? It’s clearly competition-based,” he says. “If you get somebody sick, it’s $250. If you park next to a restaurant, it’s a $1,000 fine.”

The California litigation succeeded partly because state laws had been interpreted as forbidding cities and counties from banning street vending. Geller says there’s nothing so direct in other states, which could make lawsuits harder. Challenges also vary between cities. For example, he says New York City’s gray market for food vending permits limits food trucks’ growth.

Now Geller is trying to help food truck associations help themselves by forming the National Food Truck Association. He doesn’t intend to use the group to fight regulations in every jurisdiction. Rather, he wants to get local food truck groups together to share strategies and knowledge.

“My mission isn’t to go and fight everybody’s battles. It’s to empower them,” he says.

This article originally appeared in the September 2014 issue of the ABA Journal with this headline: “Eat Locally, Act Nationally: Lawyer forms a national group to link food truck associations.”

Opening a restaurant is a common dream. But for many people, a food truck provides more flexibility and a chance to try out innovative recipes. In the following gallery, you’ll find six lawyers who took their food truck dreams for a spin.