Listen to What You Write: Your Ears Will Tell You if You’re Communicating Ideas Effectively 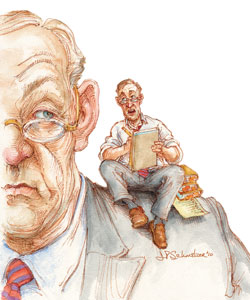 Nick Wheeler stopped Angus outside the court of common pleas. “Angus,” he said, “I’ve been looking for you. I need your help on a brief. Can I buy you a cup of coffee? You too, Jimmy,” he said to me. “I need all the help I can get.”

Five minutes later, in the First Federal Soup and Sandwich Shop, Wheeler pulled a brief out of his leather case. “Read the first sentence,” he said.

“The gravamen of the cause of action in the instant case is founded in the doctrine of promissory estoppel, a concept which obtains in the law of contract to vindicate justified expectations in situations in which there is no formal agreement, but in which there is nevertheless an equitable basis to enforce a promise on which a promisee has relied to his or her detriment.”

“She may be,” said Angus, “but it’s a little hard to tell from that first sentence.”

“I know,” said Wheeler. “That’s why I need your help. You’re always talking about the need to be bilingual. Could you translate this brief from Legal into English for me? I pay very well.”

Angus looked through the brief for a minute, then back at Wheeler. “I’m sorry, Nick,” he said. “I can’t.”

“But why not?” said Wheeler.

“Because,” said Angus, “there’s more to it than just taking a blue pencil and getting rid of the obscure legalisms and stuffy inversions. Trying to translate a brief from Legal to English can produce some pretty strange results because the words you use when you think actually shape the content of your message.”

Wheeler pondered that idea for a moment. Then he said, “I think you’re right, Angus. So let me try my backup plan. Would you be willing to do a workshop with my firm on effective legal writing?”

The next Saturday, everybody in Nick’s firm was in the conference room before 9 a.m., ready for Angus to start. I was in the back, taking notes on the key points.

Look at it this way. you are both a professional speaker and a professional writer. You doubt it? You can’t practice law with out those skills. Nobody pays you to do legal research and then do nothing with it. Nobody pays you to work through the theory of your case and then keep it to yourself. You are a paid writer and speaker, which means you are responsible for being an effective communicator.

Lawyers are obsessed with precision—which isn’t all bad. When push comes to shove, somebody’s got to be precise, and it usually isn’t the client.

But too often, precision is purchased at the price of clarity, which is a self-defeating bargain.

Good organization is a key to clarity, and Angus has a simple system for organizing any piece of writing.

First, list every point you think you should make—just a word or two for each one—so it will come back to you later. Don’t worry about the order; just write down all your ideas as fast as they come into your head. This is the time to brainstorm, not to cull good from bad.

Because the indifferent ideas you write down now will lead you to better ones as you go along.

After you’ve written down everything you can think of, go back over your list. If you worked fast, you will see some of your best ideas listed two or three times, often using different words to make the same point. Pull the similar points together; the variety of ways you listed them will help you later on.

What’s left is the heart of what you’re going to write.

Second, prepare a simple outline—just like in high school. Remember what an annoying extra task it was when you had to turn in an outline before doing a writing assignment? That was because you really didn’t need an outline for a 200-word paper.

But now you need outlines. So put all your points in order. Concentrate on clarity and simplicity. Worry about whether your organization makes sense and is easy to understand instead of whether the next point should start with a capital letter or a Roman numeral.

Now work from the outline, and you’ll be amazed at how fast the writing goes.

The idea is to avoid any word that does not command instant understanding. Your words should be transparent vehicles that let the reader see your ideas without straining to grasp your meaning.

“But wait a minute,” you say. “I deal with sophisticated concepts that are beyond the ken of ordinary folk. Special ideas need special words that only special people can follow.”

That’s what you think. Most of the concepts you struggled to master in law school can be grasped by the average 12-year-old. It’s the vocabulary training that makes law school such drudgery. The problem is, the words you learned are the words you use, and you’ve got to train yourself to use simple language again.

But won’t that be condescending to a sophisticated audience? Absolutely not. We condescend when we explain what needs no explanation: “Here is a screwdriver. We use it to drive screws. One end fits the screw; the other end is a handle, so called because it is held by the hand.”

Is that condescending? You bet. But it isn’t the words that offend—it’s the way they are used.

Sentences that try to make two or three points usually have so many dependent and independent clauses (along with asides and parenthetical comments) that you find yourself in a grammatical labyrinth, out from which you cannot easily extricate yourself unless, of course, it is a process at which you are particularly adroit, but at which your reader probably is not.

The obsession with precision forces lots of lawyers to try to make every sentence a completely accurate, self-contained statement of the law or the facts.

You can’t do it, so don’t try. You are entitled to take advantage of context. If you just made a point, you don’t need to say it again in the next paragraph, or even say that you said it before. Too many road signs just clutter the path.

Want a good rule of thumb that will help keep your writing crisp?

I have a friend who sometimes ends questions with “Isn’t that not so?” You can puzzle over that one for some time. That’s the problem. It stops both the ear and the eye.

It’s not unlikely that you’ve used double negatives yourself. I just did.

“Not un-” slows down the reader and takes the punch out of what you have to say. Getting rid of it would be a not unwelcome change.

Footnotes are as bad as all the commercials crammed into the last half-hour of a television movie. They fragment and interrupt.

If the point is worth making, it is worth putting in the text—unless you actually think it would be more persuasive to seem like you are a legal academic.

When you write about “the former” and “the latter,” you send your readers back over what they read previously to make sure they’ve got your points in the right order. It stops the flow of information and offends the reader. The former is destructive, the latter regrettable.

The passive voice has a formal ring that some lawyers think lends an air of dignity to a piece of writing. But besides being a little stuffy, sentences in the passive voice tend to be a bit longer than those in the active voice.

The passive voice is avoided by good writers. Instead, good writers use the active voice.

Sometimes, though, the passive voice is just the thing to give the emphasis you want. Consider these two sentences:

• The opinion in Michelson v. United States was written by Mr. Justice Jackson.

The passive voice is fine—just be sure you have a good reason for using it.

USE REAL NAMES WHEN POSSIBLE

The idea was to refer to people as plaintiffs and defendants or petitioners and respondents instead of using their real names. That way, we lawyers could drain all the humanity out of the case and focus on pure questions of rights and duties.

But it makes the whole story harder for anyone to follow—even lawyers and judges who have been doing it for years. Use the real names whenever you can.

PASS ON THE ALPHABET SOUP

OK, you know what the NLRB and the FAA are. And FTC instantly rings a bell for you, though not necessarily for your reader. And FEC may set your reader to wondering whether it has something to do with education or energy before realizing it’s the Federal Election Commission.

No matter how sure you are that everybody knows what the letters mean, use the full name several times at the beginning. The readers who know will not be offended, and those who don’t will be grateful.

LISTEN TO WHAT YOU WRITE

Polish the piece again and again. Keep asking yourself, “If I were reading this for the first time, would I understand everything it says?”

Then read it out loud to as many people as you can make listen—one at a time. Your ear will catch the little mistakes and omissions your eye skipped over. And if anything sounds awkward or strange, even if it looks OK, fix it so it sounds right.

Write to the ear so your readers will hear what you have to say.

The ABA Journal is occasionally reprinting some of Jim McElhaney’s most popular columns from past years. This article originally appeared in the Journal’s December 1995 issue under the headline “Writing to the Ear.”