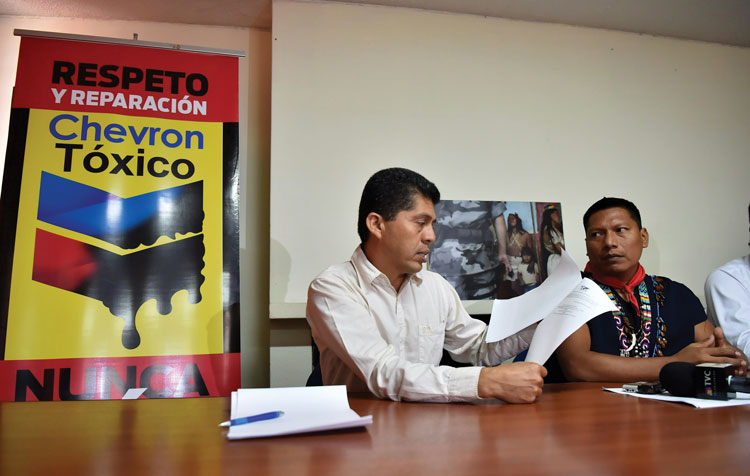 Pablo Fajardo (left), a lawyer representing the Ecuadorean indigenous communities suing U.S. oil giant Chevron for billions of dollars in damages for pollution, speaks during a press conference in Quito on Sept. 20, 2017. Fajardo said they had decided to withdraw legal action brought in Brazil. Photo by Rodrigo Buendia/App/Getty Images.

“When we invest, we have no control over strategy or settlement,” says Perla of Burford. “The only influence we have, in terms of settlement, is when we decide to invest and the return we have on it.”

Chock of Bentham also says claims about undue influence on the part of funders are completely unfounded. “In the U.S., that’s not the case. The client and firm are in control, and no reputable funder would try to influence strategy,” she says.

In regard to settlement matters, Chock says in single cases, funders have the right to be informed of any settlement discussion, but “the client is ultimately in control.” In fact, she says if they had been allowed to offer legal advice, in some instances, the plaintiffs would have won larger settlements. “We’ve had situations that if they had followed our advice, they would have done much better,” she says.

Lisa Miller, principal at the Lex Law Corp. and a civil litigator in California and New York who consults on ethics and third-party funder issues, says when it comes to issues of funding and control, lawyers have to set clear guidelines from the get-go about independence of thought and action. “Attorneys are going to be wading into a Wild West,” she says. “And they need to make sure the ethics wall is firmly in place.”

One of the hotly debated topics around litigation funding is the question of disclosure: Should plaintiffs be compelled to reveal that their work is being underwritten, in part, by a third party?

Those in favor of disclosure point out that under the Federal Rules of Civil Procedure, defendants are required to disclose information about their insurance coverage at the outset of their case.

“Defendants are saying, ‘Look, federal judges require that all insurance contacts should be revealed—how much money there is, how much money they can spend on litigation, etc. This is totally one-sided. Why shouldn’t outside funding be revealed, as well?’ ” Beisner says.

Not surprisingly, funders oppose forced disclosure. “Opponents want to analogize it to liability insurance, but this is not the same thing,” Chock says. She says disclosure of litigation funding prejudices claimants and will result in costly “discovery sideshows” that unnecessarily burden claimants and courts in a way that rarely arises in insurance coverage disclosures. 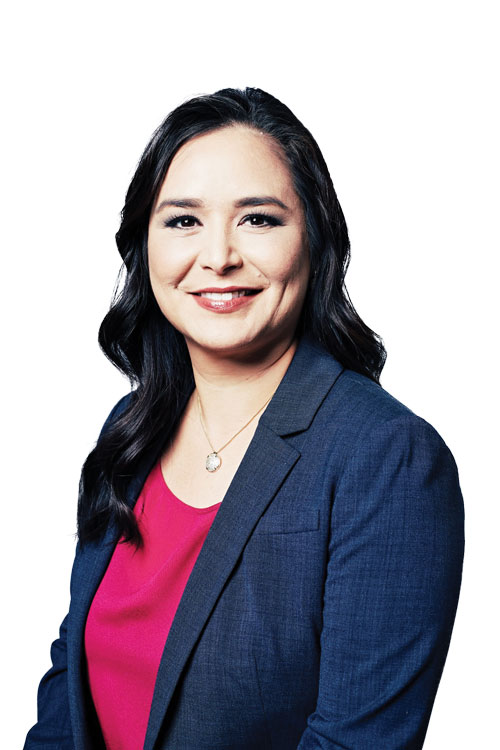 Allison Chock: “Clients are now demanding this, they want law firms to take on some of the risk.” Photo courtesy of Bentham IMF.

To Chock, the whole thing smacks of a fishing expedition. “Disclosure is the first step,” Chock says. “What defendants are truly after is a discovery sideshow, targeting the financial wherewithal of the claimant, and worse, trying to learn of weaknesses in the claims that may have been identified by the funding professionals. I used to be a defense lawyer, so I’d want to know that stuff, too. But why is that fair?”

Regardless, forced disclosure about litigation financing may be around the corner. In April, Wisconsin passed a bill requiring disclosure for all litigation funding arrangements—consumer and commercial. It was the first state to pass such a law.

And in May, three Republican U.S. senators introduced the Litigation Funding Transparency Act of 2018. The bill seeks to mandate disclosure of the existence of litigation funding agreements and details of the agreements in any federal class action or multidistrict litigation case.

Critics such as Beisner say the unique structures of class actions and MDLs mandate disclosure. “When litigation funding started, we all thought class action funding would never happen. The attorneys can’t agree to give you money—the class members would have to agree,” he says.

The way funders get around this, he says, is the attorney in a class action agrees to give up a part of their contingency fee to litigate that matter. “The whole idea of the arrangement is a concern because of the ethics rule that says that an attorney can’t share their fees with a nonattorney,” he says.

While Chock says she is “vehemently opposed” to mandated disclosure, she says it might make sense for certain class actions and MDLs, depending on how they’re handled. She points to the way Judge Dan Polster of the U.S. District Court for the Northern District of Ohio handled litigation funding disclosure in the multidistrict opioid litigation.

Polster ordered the litigants to reveal their litigation financing agreements to the court—not to opposing parties. He also required that counsel and the funder sign statements that funding wouldn’t give the lender any influence over litigation strategy or settlement decisions, or undermine counsel’s independence.

While certain aspects of litigation funding might continue to be debated and contested, funders think their future is bright.

“I think we’ve just scratched the surface,” Perla says. According to him, Burford is moving into providing business solutions for law firms, as well as exploring the private equity model to provide firms alternative solutions to the cash partnership problem.

For example, a law firm might spin off its administrative back office and other nonlawyer-related tasks as a separate business structure owned by the partners. Then the law firm would pay the operations entity for its work on behalf of the firm. The spin-off service would be a source of permanent equity for the partners.

Stevens & Lee shareholder Robinson says he’s seeing increased demand in the intellectual property space. “A patent owner might have a meritorious claim—they can prove patent infringement—but might not have the resources to explore a suit. Bringing in a funder can help in these kinds of cases,” Robinson says.

He also predicts the litigation funding model will empower clients in fee negotiations. “I think it has the potential to be transformative,” Robinson says. “It could, particularly for sophisticated business litigants, offer another route to negotiate price with their lawyers.”

Clients could conceivably negotiate a percentage of a fee upfront and risk the difference based on the result, he says. Adding litigation financing as an alternative to billable hours could “eventually let a client that’s frustrated with the risks it takes in an hourly engagement have a solid idea about acceptable price on the front side, along with the risk that its lawyer might share with it,” he adds.

Robinson and others predict that demand for litigation financing—particularly on the part of clients—will continue to grow. “It’s exciting for them because it keeps capital in their pockets,” he says. “It also can allow a litigant to engage a lawyer that might be priced beyond its usual budget and give the lawyer more freedom to prove the client’s claims.”

The rise of artificial intelligence has led to additional opportunities for litigation financing firms. LexShares, a litigation funding firm founded in 2014 with offices in Boston and New York City, has developed a proprietary platform that scours federal and some state court filings for potential investment leads.

Called “Diamond Mine,” the technology searches dockets for keywords such as “breach of contract.” It downloads cases, converts them into raw text and then applies a 17-point scoring system to determine a baseline of investment opportunity.

If a case looks promising, the company reaches out to litigants to gauge their interest in financing. If they’re interested, LexShares attorneys assess the claim’s validity and determine whether it’s a good candidate for financing. The majority of LexShares’ investments are about $1 million.

According to the company, in the first half of 2018, Diamond Mine identified 436 cases that led to litigants seeking financing of more than $540 million, but the firm only invested in 20 of the 436.

San Francisco-based Legalist is another litigation financing company using technology to find potential clients. It was founded in 2016 by two Harvard University dropouts who developed an analytics tool that constantly monitored courts and livestreamed the data. “It made the data readable to lawyers, so we thought they would pay us for the data to help better assess their own cases,” says co-founder Eva Shang.

While the technology didn’t take hold with lawyers, it earned Shang and her co-founder, Christian Haigh, a spot in the vaunted incubator startup Y Combinator, where the duo first learned about litigation financing.

Today, the duo’s algorithm uses court documents to make underwriting decisions by looking at data points, such as the time it takes similar cases to be resolved and how many cases in a specific jurisdiction settle. Once a case has been identified and a litigant has agreed to pursue financing, the sole Legalist attorney vets the case. As of press time, Legalist says it’s vetting additonal lawyers to join the company.

“We’re a technology company that wants to fight the injustices of the legal system,” Shang says. “We fund commercial cases in the lower range—the real David vs. Goliath cases, not the Goliath vs. Goliath ones.”

Ultimately, Miller of the Lex Law Corp. urges clients and law firms to educate themselves about the benefits and potential problems with legal funding. “I don’t think [litigation funding] is a bad thing; it’s just not well understood,” she says. “In litigation, the last thing you want is more trouble. It’s already expensive and exhausting.”