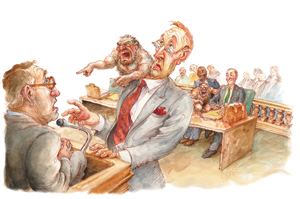 You knew it was a bad question to begin with. You said “strike that” at least three times, “with reference to” twice, and included one each of “a time came, did it not” and “Would you indicate for the benefit of the judge and jury what, if anything, transpired next?”

But when your opponent suggested that your question was a little confusing, you refused to simplify it. You said the witness understood the question even if the other lawyer did not (which you thought was a pretty clever riposte). So you instructed the witness to answer the question. Then when the witness asked you to repeat the question, you asked the court reporter to read it back.

Because of all the bickering that had gone on, the court reporter had to go through 15 or 20 folds of stenotype paper just to find where the question started. When he finally read it back, you were too embarrassed to try to make it better even though it sounded awful.

What happened? While your opponent wasn’t really trying to make your question easier to understand, that’s exactly what she was doing.

Then why didn’t you just mellow out and take the opportunity to make your question better?

Because your inner beast was on the loose.

Everyone has an inner beast—a primitive set of emotions driven by a region of the brain under the cerebellum and close to the brain stem.

There, deep inside the skull, is what some folks call the reptilian brain. It processes basic drives: eating, sleeping, sex. When you are attacked, it sends out the signal to fight or run.

I call the inner beast Mongo. Mongo is your co-counsel in every case you try. You cannot make him go away. When Mongo is aroused, he takes absolute control over the nervous system and can put all reason on hold until the danger has passed.

Unfortunately, Mongo tends to misinterpret what happens in the courtroom. For Mongo, every lawsuit is a fight, every witness a potential enemy and every opposing lawyer a saber-toothed tiger—to be attacked and destroyed.

That’s what happened with your question. Mongo interpreted the other lawyer’s objection as a personal attack. Just because the other lawyer said the question was bad, Mongo said it was good and insisted on an answer.

Mongo can cause a lot of trouble.

It starts with an odd turn of phrase in a letter from the other side or a minor social slight, some disparaging remark about another lawyer in your firm, a critical comment about how you conduct discovery. Mongo takes it personally.

You probably have noticed that Mongo has pretty thin skin and is quick to take offense. You may have wondered why someone so primitive can be so touchy.

Because that’s Mongo’s job. He’s there to protect you from sudden attack, to stimulate the flow of adrenaline so you can fight, run or climb a tree. He’s got to be alert all the time.

But Mongo thinks he is still in the jungle. A suspicious comment becomes a dangerous rustle in the grass. A strange procedural move is a hissing serpent, coiled around the low-hanging limb of a tree. An odd phrase in a contract is a black widow spider waiting to strike.

With dangers like those, you can see why anything Mongo does not understand makes him angry and suspicious.

To his credit, Mongo has probably saved your professional life a number of times. But he still is difficult to work with. So Mongo gives the lawyer who has offended him as good as he got, and the other lawyer responds—perhaps through his or her own Mongo.

This punch and counterpunch advances from angry quibbling to major antagonism.

For Mongo, this is all very natural. As far as he’s concerned, the point of the lawsuit is not to get a favorable verdict but to kill the other lawyer.

When Mongo acts this way, you need to have a talk with him. He has to understand that, whether it is subconscious or deliberate, the other lawyer wants him to be angry. Once he realizes that the trash coming from the other side is designed to egg him on, Mongo won’t give the other lawyer the satisfaction of reacting to his or her game.

As Adam and Eve learned in the Garden of Eden, there are things we want just because we’re not supposed to have them. Lawyers are no different. There are lots of things we do, not because they will help our case but because we are told not to do them.

If you listen closely when that happens, you can usually hear Mongo mumbling, “Judge not let Mongo have cookies. Mongo need cookies. Mongo want cookies now.”

Take arguing during your opening statement. There are some lawyers who will tell you to do as much as you can. And there are some judges who will let you. Neither is helping your case.

You know that opening statement is a special time. It’s your opportunity to tell the winning story that shows the injustice that has been—or is about to be—done to your client. It’s the time when judges and juries tend to take sides, to pull for one party or the other. It is also the time when they pick one of the lawyers to be their guide—someone they can follow throughout the case.

But start arguing the case before the judge and jury even know what it is all about, and you are no longer the guide but someone with something to sell.

Mongo doesn’t know that. Mongo is sure he can smell the cookies because the judge said he can’t have any. The temptation becomes overwhelming, and your opening statement is filled with adjectives and adverbs—purple prose that rings with synthetic sincerity.

When you explain to Mongo that arguing in your opening statement is not actually the cookie he thinks it is, you’ve got a much better chance at one of the toughest jobs of self-control.

We have come to overvalue witness control on cross-examination. To be sure, the technique of asking short, leading questions is one of the essential tools of a good cross-examiner. But there’s a lot more to it than that.

Most of the time we only get a few facts on cross. Instead, one of the main purposes of cross is to show who the bad guys are. Cross-examination is actually more impression than it is information.

So the more unreasonable, argumentative, unresponsive and evasive the witness is on cross-examination, the more it rubs off on the side that called him to the stand.

Unless the cross-examiner’s behavior seems to justify the witness’s conduct.

When a witness is evasive on cross, Mongo takes it as a personal affront. It is a challenge to his sense of self. So he browbeats and bullyrags the witness, slashes him with sarcasm and hurls argumentative questions at him like a barrage of stones.

In the unequal battle between attacking lawyer and cornered witness, the jurors don’t remember who started it. They just know who is throwing the stones.

It’s time for another talk with Mongo, who must understand that an unreasonable witness on the other side is just what he needs to show the judge and jury who the good guys are.

Rulings on evidence and procedure that don’t go his way are difficult for Mongo to handle. Left to his own devices, Mongo will snarl, make faces, shoot daggers with his eyes, make comments under his breath about how the court of appeals will have to straighten out what’s going on, slam books, crumple paper, break his pencil, roll his eyes or look to heaven for help.

Mongo needs to realize that the judge’s ruling was not an evaluation of your abilities or the level of your professional work.

Most of all, Mongo needs to know that the judge and jury do not add up all the debating points, the clever buzzwords, the little digs and jabs to decide who wins the case. Beating a point to death does not make it true, and repeating an argument again and again does not win it acceptance.

A lawsuit is neither a high school debate nor a boxing match. You do not win a case because you are perceived to be the superior advocate. On the contrary, if the jury is too aware of your persuasive abilities, it can hurt your case. You want the judge and jury to think your client has the better facts, not the better lawyer.

If Mongo understands that, he’s getting pretty sophisticated.

The ABA Journal is occasionally reprinting some of Jim McElhaney’s most popular columns from past years. This article originally appeared in the Journal’s July 1995 issue under the headline “Mongo on the Loose.”