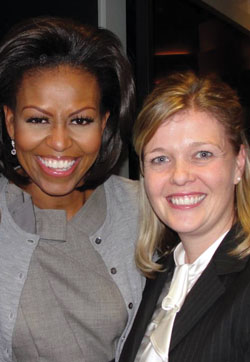 A year ago, Judge Erin Wirth couldn’t name one other attorney with a spouse in the military. But since co-founding the Military Spouse JD Network last May, Wirth has heard from more than 200 lawyers who face the challenge of maintaining legal careers while supporting military spouses.

“We all felt extremely isolated—that’s the most common thing we hear,” says Wirth, an administrative law judge with the Federal Maritime Commission in Washington, D.C.

Wirth connected with Mary Reding while researching bar membership for military spouses. Together they and their organization got the message out about the trials and tribulations of lawyers who are military spouses.

At this year’s ABA Midyear Meeting in New Orleans, the House of Delegates unanimously passed a resolution urging state and local bar authorities to accommodate these lawyers in various ways, including “admission by endorsement” to allow military spouse attorneys licensed in good standing in one or more jurisdictions to be admitted without examination in another, and reduced bar application and membership fees.

Soon after, first lady Michelle Obama and Dr. Jill Biden, wife of the vice president, unveiled a report that aims to remove employment barriers for military spouses. Both women praised the ABA for passing its resolution.

LAWYERS ON THE MOVE

Wirth is a good example: She has moved seven times since graduating from law school in 1995, and she has never held the same job for more than three years. A Coast Guard wife, she passed three bar exams and was admitted on motion to work for legal aid in a fourth jurisdiction.

Consistent with a trend of unemployment and underemployment among military spouses in all professions, nearly half of Military Spouse JD Network members are employed in nonattorney jobs or unemployed. Because military families typically move every two to three years, attorney spouses often are not in any jurisdiction long enough to meet the requirements for admission by motion, Reding says.

Further, some states consider telecommuting to be unauthorized practice of law, a complication that Reding confronted when her husband’s military career took the family to Tucson, Ariz., two years ago. In the seven years since marrying a U.S. Air Force pilot, Reding has moved five times, including tours overseas.

“When you look at a military spouse resumé, you might think the person is really flighty and can’t hold a job,” says Reding, who is licensed in California.

Reding says another challenge for military spouses is accumulating enough experience for future job growth. Frequent moves often limit opportunities to develop expertise. As a result, some of her organization’s members are perpetually applying for entry-level jobs.

Those who tackle the licensing hurdles are then faced with the prospect of applying for jobs near posts or bases, which are often far from metropolitan areas. To keep her legal career afloat, Wirth has lived on her own, and at one point she commuted up to three hours a day.

Many military spouse attorneys begin searching for jobs in new locations without a single contact in the legal profession. But the network, billed as a “bar association for military spouses with law degrees,” is helping. Through an active Facebook group, members post about job searches, contacts in cities where others are seeking work, and volunteer opportunities. Local meet-ups are now under way.

With its newfound attention, the network is now working with bar groups nationwide to effect rule changes to allow licensed attorneys to obtain admission in new jurisdictions if the move is necessitated by a spouse’s military service.

Due to an editing error in “Mission Accomplished,” May, Erin Wirth was incorrectly described as an administrative judge with a Virginia state agency. Wirth’s position is with the Federal Maritime Commission in Washington, D.C.