No Laughing Matter: Failing the Giggle Test Might Leave You Crying 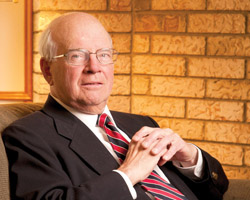 Jim McElhaney’s 25-year run as Litigation columnist for the ABA Journal will come to a close next fall. During those years, McElhaney’s straightforward advice on trial practice became one of the most popular features in the magazine. The Journal is reprinting some of McElhaney’s “greatest hits” from the past quarter-century. This article originally appeared in the Journal’s October 1988 issue under the headline “The Giggle Test.”

Judge Wallop, my curmudgeon friend on the Court of Common Pleas, was at it again. “I blame the law schools,” he said. “If they ever trained professionals, they don’t anymore. They don’t train lawyers. They don’t even train people to think like lawyers. They aren’t law schools; they’re the law departments of universities.”

“Not fair,” I said. “Even the most humble law schools have courses they never dreamed of when you went to school, and a lot of them involve real skills training: trial advocacy courses, advanced litigation seminars, client counseling, negotiation and settlement, legal clinics. …”

“Aw, Jimmy”—that’s what Judge Wallop calls me when he wants to be condescending—“now you sound just like a law school dean. And you’re missing the point, to boot. It’s not the name of the course that counts, but what they teach. And American law schools are churning out hordes of brilliant young lawyers who can spot every issue, find every case, discuss every point—but who don’t have the common sense to know when an argument is a loser.

“Happened in my courtroom today,” he said. “Man is suing a railroad, and his lawyer offers a photo of the same kind of locomotive that hit the man’s car. Demonstrative evidence. Then the defense lawyer—a young man from one of the big firms, probably was a law review editor in school—jumps up and objects that the photo is not the best evidence.”

“He wanted the plaintiff to introduce the actual locomotive into evidence, eh?” I said. “Well, at least he has a sense of humor, which is more than I can say for a lot of judges.”

“Humor?” said Judge Wallop. “If he would have cracked a smile, winked or even looked out the corner of his eye, I would have given him a prize. But no, he was serious. Pulled out the rules and read them to me. Turns out he thought that because the railroad’s name was on the side of the locomotive, the locomotive must be a ‘writing’ under the rules of evidence.

“Yes, sir,” said Wallop, “I blame the law schools. They teach these kids every possible argument in the world, but don’t teach them to shut up when the argument can’t pass the giggle test.”

“The giggle test,” said the judge. “A fundamental rule of advocacy. Never make any argument unless you can say it with a straight face.”

DON’T SMILE WHEN YOU SAY THAT

Giggle test, smirk test, straight-face test—they’re different names for the same point. It’s not enough that an argument makes legal sense. It has to be factually and emotionally plausible, as well. Otherwise, it’s a loser.

Of course, there are plenty of arguments made every day that don’t even make legal sense. In a recent hearing in Washington, D.C., a labor union intervening in a case wanted to show some of the problems that workers were encountering in a manufacturing plant. But instead of calling the workers to testify, the lawyers called a union representative who had gone to the plant and interviewed some of the workers.

When the union representative was asked what the workers told him, the other side objected to hearsay. Without batting an eye, the union lawyer said, “That’s not hearsay, your honor; he heard it himself.”

Failing the giggle test is just one of five ways to lose an argument that have the potential to do even greater damage to your case. The others are:

• Overstate the facts in your favor.

• Conceal some fact that hurts you.

Of course there are more than five ways to lose an argument, but these have a special destructive power that goes beyond the argument. In the wrong situation, doing any of these things can cost you the entire case.

That is because every one of them is tied to your credibility as an advocate.

Overstate the facts, and it looks like you do not believe in your case. Try to hide a damaging fact, and it looks like you think it makes your case a loser. Misstate the law, and the judge cannot trust your arguments. Ignore the issues, and you cannot be counted on to guide the fact finders to the right questions, much less the right answers. Make an argument that flunks the giggle test, and your judgment is suspect, which clouds all your other arguments.

Even if you have some marvelous arguments, mixing them with frivolous points can offend the most sophisticated court. In Timken Roller Bearing Co. v. United States (1951), the Supreme Court very nearly dismissed an appeal that was based on 206 assignments of error.

“These assignments are unduly repetitious, some are frivolous, and the excessive number obscures the actual grounds on which appellant relies for reversal,” wrote Justice Hugo L. Black in a footnote to his opinion for the court.

“As the government pointed out in its motion to dismiss the appeal, our prior cases justify dismissal in such situations. We do not take that action, however, since appellant, in its brief opposing the government’s motion, has sufficiently spelled out the few real objections it raises here.”

BETTER NOT GO THERE

If you think you are immune from this, watch out. Even the finest lawyers occasionally make silly arguments. Just as Sir Edmund Hillary climbed Mount Everest “because it’s there” (actually said by George Mallory, who died in a 1924 attempt to scale Everest), at times you will be tempted to make an argument because it is available.

Sudden inspiration can be another trap. The stroke of brilliance that lights up the mind in the middle of the night can be an utter embarrassment in front of the jury the next day. That is the reason for using the giggle test. Actually saying the argument out loud at home or in the office before you say it in court is a good way to stay out of trouble.

Even more dangerous is the piercing shaft of light that comes in the middle of trial. It is dangerous because you do not have a chance to test the idea before you use it. You know you ought to leave it alone, but it looks so attractive that you cannot resist trying it.

That is what happened to no less a lawyer than Jo Ann Harris of New York City. (She is a trustee emeritus at the National Institute for Trial Advocacy and a scholar-in-residence at Pace Law School in White Plains, N.Y.)

Harris was representing a woman charged with murdering her husband with a kitchen knife. The case was tried to the judge; and from the start, the defense theory was that all the surrounding emotions and actions made it a case of manslaughter rather than murder.

But something happened when the medical examiner took the stand for the state. He testified that it took a considerable amount of deliberate force to drive the knife 6 inches into the victim’s body.

So on cross-examination, Harris tried to get the medical examiner to admit that falling on the knife could have driven it 6 inches into the victim’s body. But when she looked over at the bench, she saw both the judge and his clerk wincing in agony, distressed to see her suddenly grab at another theory in the middle of trial.

Harris knew she had to do something to regain her credibility; leaving things as they were would not be enough. She got her chance on final argument. She explained that the defense was manslaughter, and that she was making no claim of accidental death. Under the circumstances, she said, the only relevance of falling on the knife was to show that just a slight amount of force—nothing superhuman—was all it took to drive the knife into the body.

Lawyers are not the only ones who need a giggle test. There is one for judges, too. It happened in North Carolina not long ago. The judge ruled against the plaintiff—the issue doesn’t really matter. Finally, the plaintiff’s lawyer approached the bench and said, “Your honor, may I have the basis for the court’s ruling?”

“Why?” the judge replied. “If I tell you, you’ll just appeal.” It sounds like the right thing to do.