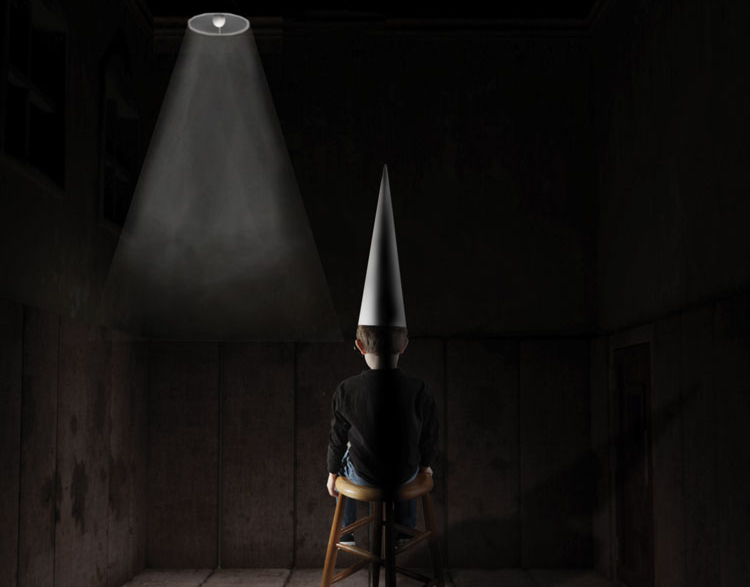 The first clue that a teacher had been shutting Cecilia and Kevin Wilson’s son, Ryleigh, into a school closet appeared on Facebook.

The first-grader frequently had emotional outbursts in fall 2012. Administrators at Mint Valley Elementary School in Longview, Washington, often asked the parents to take him home. During a particularly bad incident on Halloween that year, they arrived at the school to find Ryleigh being restrained by the principal, as the child screamed and hyperventilated. After that, the Wilsons say Ryleigh resisted going to school and became afraid to be left alone.

They began to understand his behavior when another Mint Valley parent posted pictures of the school’s “isolation booth” to Facebook in November of that year. The booth was a closet-size, lightless, windowless room with padded walls. The pictures circulated among Longview parents, and when Ryleigh heard his parents discussing it, he said he’d been shut into it multiple times that fall. On Halloween, it was because he left his seat without permission.

Washington state law at the time permitted isolation rooms to be used only with parental permission as a type of therapy for special education students. Ryleigh was not in special education, and the Wilsons hadn’t even known the booth existed before the Facebook pictures. They and four other families, who also were unaware of this practice until the Facebook posts, sued the district in 2015.

The parents lost. Their attorney Tara Lawrence of Portland, Oregon, says the plaintiffs were stunned by the verdict. Advocates for disabled students say this kind of loss is not unusual. Though isolation of juveniles is forbidden in federally funded mental health care facilities, as well as in federal prisons, no similar provision exists for schools. State laws, if they exist at all, are a patchwork. Some apply only to disabled students, some to all students, and other causes of action have had only mixed success. Juries unfamiliar with the needs of disabled students may defer to teachers’ judgment.

“It’s hard to win these cases, legally,” says Mary Griffin, a lawyer and education program director of the Washington Autism Alliance & Advocacy. “I’ve always thought it was bias. But … this Mint Valley thing was very disturbing because she still didn’t win when she took out all the kids that had [disability diagnoses].”

Disabled students are disproportionately affected by seclusion policies. According to the U.S. Department of Education Office for Civil Rights, special-needs students were just 12 percent of all students in 2013-2014, but they represented 57 percent of those put into seclusion. Black kids were also overrepresented; they were 19 percent of the student population with individualized education plans, which were authorized by federal disability rights law that year, but were 36 percent of those secluded.

Seclusion is not considered a timeout or a moment in a quiet area. The Department of Education defines seclusion as involuntary confinement in a space that the student is prevented from leaving. Using that definition, a 2014 report from the U.S. Senate Health, Education, Labor and Pensions Committee said research has found there’s no therapeutic benefit to the practice. State laws, school policies and IEPs often authorize seclusion as a last resort in an emergency or permit it as a way to calm highly emotional students.

But in practice, the Senate report found that it can be misused, with students sent to isolation as a punishment, sometimes for long periods or repeatedly over the course of a semester.

As with Mint Valley, the Senate report found that many schools don’t tell the parents when they’re using seclusion—even when the law requires it. But like the Wilsons, those families will still notice the effects.

“I think just the violation of one’s autonomy and civil rights by being held against their will is a really traumatic experience for a lot of kids,” says Acosta. This may be particularly acute for children whose disability prevents them from speaking because they can’t tell anyone.

Seclusion also subtracts from instructional time, which can be significant if done frequently. It’s also not a long-term solution to the problem behavior.

“In some cases, removing the kid to isolation in response to disruptive behavior encouraged the behavior, because it removed the kid from whatever was bothering him or her,” says George, who helped write a Washington state law limiting the use of isolation and physical restraints.

This article was published in the July 2018 ABA Journal magazine with the title "Solitary for Kids: Angry parents find little legal recourse when schools put their kids in ‘seclusion rooms.’"