Room for One More? 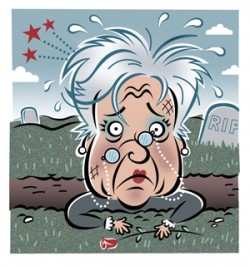 A woman attending a burial service got an unwelcome preview of what it’s like to be 6 feet under in June 2004 after an accident at a North Caro­lina cemetery.

According to a lawsuit filed in December in the U.S. District Court for the Western District of North Carolina, Marian May attended a service for a friend and wanted to place flowers on the casket. She stepped onto a carpeted area and it gave way, dropping her in­to the freshly dug grave, where she landed on the cement burial vault.

May, 82, of Marietta, Ga., had to be removed from the grave on a back­board and suffered multiple hip fractures. She claims the grave site was dangerous because the carpeting—which she says was the only ma­terial covering the opening—ap­peared to be a good place to step.

The lawsuit states that May and her husband are seeking in excess of $75,000 from three defendants—the town of Highlands, the funeral home and a landscaping service.

The funer­al home has reportedly denied responsibility, claiming that May was warned to stay away from the graveside. Representatives of the town of Highlands and the landscaping service could not be reached for comment.

May says that she continues to experience pain from a hip replacement, and that she sports an 18-inch scar as a reminder of the accident.

“You don’t wear bikinis with that kind of scar,” she adds facetiously.

There are certain issues that can’t be resolved by a mere court of law. They require the special guidance and wisdom that can only come from a higher authority—mom.

Fifteen-year-old high school student Travis Griffin reportedly earned himself a 10-day suspension in May for using the wrestling ma­neuver known as a full nelson on his Spanish teacher.

Griffin, who is a sophomore at Creston High School in Grand Rapids, Mich., was quoted as say­ing he and the teacher often engage in horseplay, but this time “I guess I went too far. … I shouldn’t have done that and I feel bad.”

But not bad enough, apparently. Veronica Griffin—Travis’ mom—wanted to make sure he learned a lesson, so she decided to dispense her own particular brand of justice.

“I wanted this to be something that he’d definitely remember,” she was quoted as saying, “and def­initely think about before he makes another bad decision.”

According to news reports, Judge Mom imposed a stiff sentence on her son, requiring him to wear a sign on his back that proclaimed: “I made a bad choice in school. Now I’m living with it.”

Travis had to walk five miles with the sign, picking up trash along the way, and was reportedly chased by three dogs during his journey. But apparently he got the message.

“I know I am not going to do that again,” he was quoted as saying.