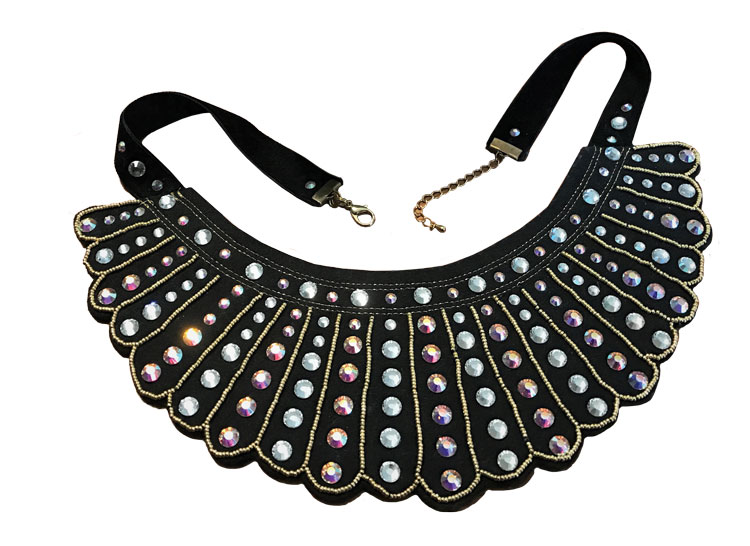 “People are hungry for a hero, and Justice Ginsburg fits the bill for many people,” says Betsy West, who with Julie Cohen directed and produced the May 2018 documentary RBG, distributed by Magnolia Pictures. It opened May 4, and according to the Wall Street Journal, earned $7.9 million the first month of release. A movie based on Ginsburg’s life, titled On the Basis of Sex, is set for release on Christmas Day, starring Academy Award nominee Felicity Jones as the justice.

In the documentary, Ginsburg talks about her mother, Celia Bader, who died of stomach cancer just before her daughter graduated from high school. Besides teaching her daughter to be independent, Celia Bader said that she should be a lady, and being a lady meant that letting people see you angry doesn’t accomplish much, the justice explains in the film. 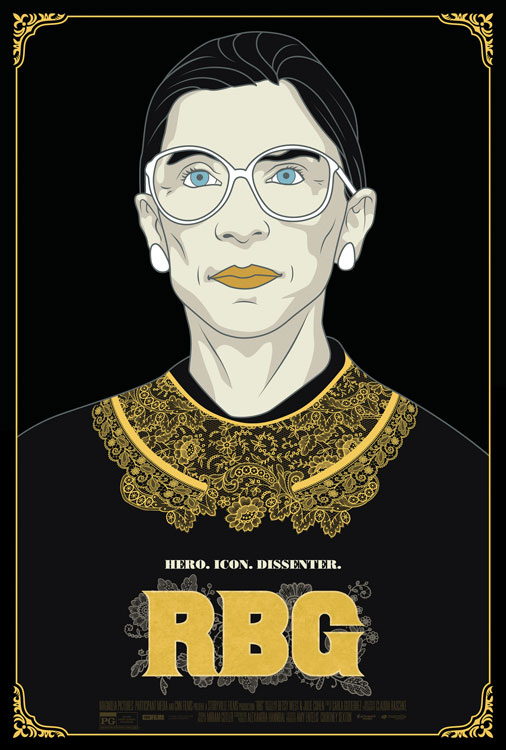 Ginsburg had plenty of reasons to be angry. She had enrolled at Harvard Law School in 1956 and had been selected for law review before she decided to transfer to Columbia Law School after her husband, Martin Ginsburg, got a job practicing law with Weil Gotshal & Manges in New York City. At Columbia, Ginsburg continued her stellar academic career, joining law review and graduating tied for first in her class in 1959. Despite those achievements, Supreme Court Justice Felix Frankfurter refused to hire her as a clerk, citing her gender. And following a clerkship with Judge Edmund L. Palmieri of the U.S. District Court for the Southern District of New York, she received no private practice job offers, presumably because she was female.

“I’m sure Ruth Bader Ginsburg has been angry about things. When she faced coming out of Columbia and not getting a Supreme Court clerkship or a job at a top law firm, how could you not be annoyed?” West points out. “She figured out a way to get past her anger and strategize her way around it.”

The documentary film crew asked Ginsburg about arguing gender discrimination cases in front of the Supreme Court, and what she thought when some of the justices—then all men—made flippant remarks about women’s equality. In an often-shared story, she replied that her job was not unlike that of a kindergarten teacher, calmly encouraging the court to think about how they would feel if a loved one experienced something like her clients did. 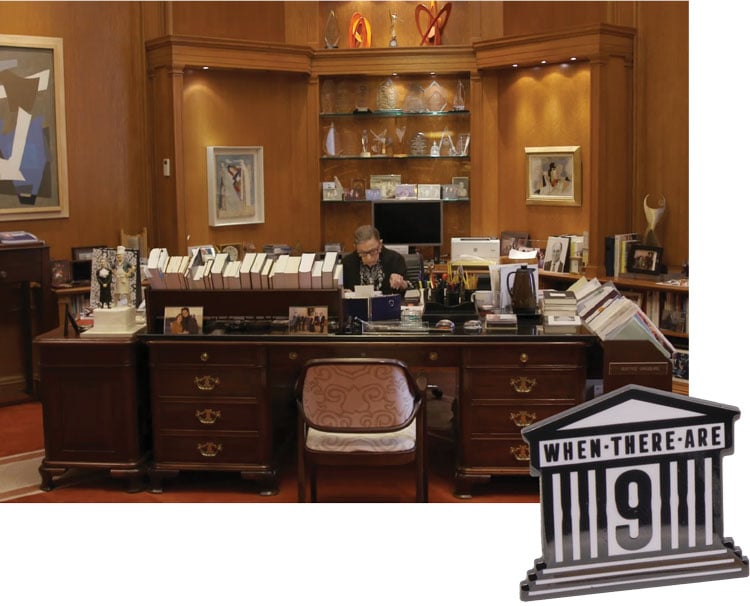 In a scene from “RBG,” Justice Ginsburg is hard at work. Photos courtesy of Magnolia Pictures, Dissent Pins.

Also, she sometimes used men as plaintiffs, to show the Supreme Court that the case in front of them was not just a women’s issue. Her approach has been somewhat different than that of other famous feminists—bell hooks, Gloria Steinem and Betty Friedan—whose images may not sell to as many different audiences as Ginsburg’s.

“She probably appeals to a lot of soccer moms as somebody that stands up for something and is tough-minded, but still capable of liking people that are different than her, and hating men is not part of her mantra,” says Michael Solomon, a marketing professor at Saint Joseph’s University. His research focuses on branding and the symbolic aspects of products.

Another pop culture comparison could be made to Hillary Clinton, who like Ginsburg, has inspired many pieces of merchandise. But some of the items don’t portray the former first lady, U.S. senator and secretary of state in a positive light. “Hillary Clinton suffered from a horrible affliction with some people just hating her. It was for many reasons other than the fact of who she is or was,” says Mary Meehan, co-founder of the consumer research consulting group Panoramix Global. Meehan adds that because Ginsburg has not run for office, she hasn’t been in the public eye as often as Clinton.

She even has her own shoes.

According to Lauren Lichtenstein, a nonpracticing attorney who runs Lo+Co Custom Sneaks, someone specifically requested Ginsburg’s image on a pair of Vans shoes, along with Rastafarian flag references in red, gold and green.

Lichtenstein, based in the Chicago suburb of Deerfield, has yet to receive a request for another U.S. Supreme Court justice on her custom shoes. In fact, the market for non-Ginsburg justices seems almost nonexistent. On Etsy, there are only a handful of items featuring her colleagues, including Chief Justice John G. Roberts Jr., Justices Samuel A. Alito Jr., Neil M. Gorsuch, Stephen G. Breyer, Clarence Thomas and now-retired Anthony Kennedy. Ginsburg’s close friend, Justice Antonin Scalia, has inspired a few items, including a portrait of his face superimposed over an excerpt from his autobiography, as well as a canvas painting of the conservative justice being gored by a unicorn.

There are a number of items featuring Justices Elena Kagan and Sotomayor, as well as retired Justice Sandra Day O’Connor. The majority of these things include Ginsburg and focus on all four of the Supreme Court’s female justices together.

While the current Ginsburg zeitgeist can be traced back to Knizhnik’s 2013 Notorious RGB meme and her 2015 co-authored New York Times best-seller, Notorious RBG: The Life and Times of Ruth Bader Ginsburg, the roots of this pop culture explosion arguably began approximately a decade before. Court watchers noticed the justice’s writing becoming bolder and more critical about other justices’ rulings when she thought they were wrong, starting with her dissent in Bush v. Gore. The retirement of Justice John Paul Stevens in 2010, leaving Ginsburg as the most senior liberal justice, could have brought the change, Karen Ellen Leve wrote in a 2014 Seton Hall Law Review article. The piece also suggested that her writing change may have come because Ginsburg, 85, was concerned there was a rise in judicial activism on the Supreme Court, and she wanted to draw the public’s attention to that. 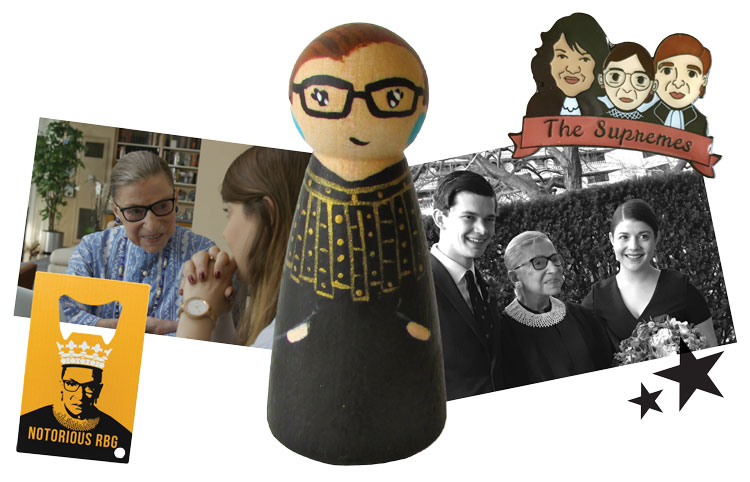 Ginsburg’s age may also figure in with her increasing popularity, as older people are becoming more celebrated, say some academics. Irving Rein, a communications professor at Northwestern University, compares Ginsburg to Sister Jean Dolores Schmidt, the 98-year-old chaplain for Loyola University Chicago’s men’s basketball team. She gained notoriety when the team made it to the 2018 NCAA tournament, and like Ginsburg, Sister Jean’s image has been featured on T-shirts and pins.

Others point to Ginsburg’s celebrated marriage to Martin Ginsburg.

“As compassionate as she is about feminism, she always seems to have good things to say about her husband and her relationship to him,” says Lynn Kahle, a professor emeritus of marketing at the University of Oregon.

Martin Ginsburg died of cancer in 2010. A successful tax attorney, he later joined his wife as a professor at Columbia Law School, which he left in 1980 when she was appointed to the U.S. Court of Appeals for the District of Columbia.

He was also known for his cooking skills, and in his honor Supreme Court spouses created a cookbook titled, Chef Supreme: Martin Ginsburg. It includes a photo of the Ginsburgs together, with the justice smiling broadly, while Martin looks at her, grinning. She wears her judicial robe and a white jabot with ruffles, and he’s in shorts and an apron, with a kitchen towel neatly tucked in at the waist string.