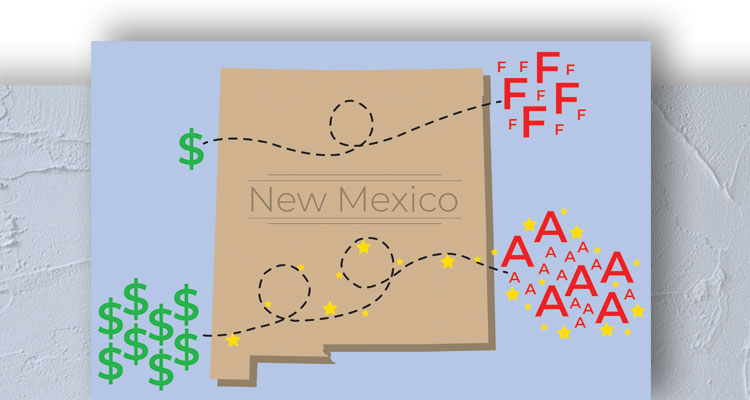 When it comes to education, New Mexico’s students score at the bottom of the nation.

In 2017, New Mexico’s eighth-graders performed the worst of any state in standardized tests for reading, and its public high school seniors had the lowest graduation rate of any state that reported usable data. A full third of those who did graduate and go to college needed remedial courses.

It’s not a coincidence that these scores are so low, says Preston Sanchez, an attorney at the New Mexico Center on Law and Poverty. New Mexico is a majority-minority state—most students and most people are Latino or Native American—and Sanchez says the state has not met those populations’ linguistic and cultural needs.

“The issue is … the failure by the school system to fully address those needs, to ensure that learning, instruction, pedagogy, instructional materials, are culturally relevant and responsive to those needs,” Sanchez says.

And that’s why Sanchez and his co-counsel filed Yazzie v. State of New Mexico, which was later consolidated with a similar lawsuit from the Mexican American Legal Defense and Educational Fund, Martinez v. State of New Mexico. Both lawsuits alleged that the state was underfunding the school system so severely that—at least as to high-risk students—it fails to meet the state constitution’s requirement for “a uniform system of free public schools sufficient for the education of … all the children.” In July of 2018, Judge Sarah Singleton of New Mexico’s First Judicial District in Santa Fe agreed.

“A review of the evidence concerning student outputs leaves this court with no doubt that the education being provided to at-risk children is resulting in dismal outcomes,” wrote Singleton, who retired in 2017 but retained this case. “Simply put, the outputs reflect a systemic failure to provide an adequate education as required by the New Mexico Constitution.”

Rulings like that are the new normal in education funding lawsuits, says David Sciarra of the Newark, New Jersey-based Education Law Center. Parents and school districts have been suing over school funding for decades, but they had limited success simply arguing that school funding was inadequate or inequitable. These days, Sciarra says, plaintiffs are using state-mandated performance standards to argue that states aren’t living up to their end of the bargain—and they’re winning.

“On the one hand, they’re essentially mandating what kids should know and learn and how to gauge that success,” Sciarra says. “But on the other hand, they’re not giving the school districts the funding necessary to provide the resources that kids need to meet those standards.”

People interested in education finance lawsuits generally break them into three waves. The first wave argued for equity in school funding by making equal protection claims under the U.S. Constitution. That practice came to a screeching halt when the U.S. Supreme Court ruled in 1973’s San Antonio Independent School District v. Rodriguez that there is no constitutional right to an education.

The second wave made equity arguments under state constitutions, all of which have a clause requiring the legislature to create and maintain public schools. That has paved the way for a third and current wave: lawsuits arguing for adequacy, not equity, under those education clauses. This is still going on, but—at least in courts—it’s been more successful.

One reason for that, Sciarra says, is the No Child Left Behind Act of 2001, which requires states to create standards and accountability systems in order to get federal education funding. When statewide test scores started appearing, they put numbers to something advocates had been saying for years: The system was failing certain kids, especially kids who started out with extra disadvantages like poverty or not speaking English fluently. Advocates could then draw a line between that data and the kind of funding available to schools.

Furthermore, the advent of legislatively mandated school standards has helped plaintiffs get past a problem that plagued earlier waves of school funding litigation: defense arguments that school funding is a political question. Before, courts might have had to devise their own standards for what counts as adequate student performance—and many chose not to.

Now, Sciarra says, their state legislatures have done that work for them, making it easier for courts to simply require legislatures to live up to their own standards. Take Pennsylvania, he says, where the state supreme court rejected school funding case Marrero v. Commonwealth of Pennsylvania in the mid-1990s as a political question.

“The court said no, we are in a different era now,” he says. “The court has judicially manageable tools to determine whether funding is adequate that have been given to the courts by the legislature itself.”

This is not universal, Sciarra notes; the Connecticut Supreme Court rejected a case in 2018.

In addition to New Mexico, recent cases in Delaware, Kansas, Washington, New York, Tennessee and elsewhere have survived arguments that decisions about school finance are inappropriate for courts.

Attorney John Robb has been to the Kansas Supreme Court six times in his current case, Gannon v. State of Kansas. If you count predecessor Montoy v. State of Kansas, which Gannon seeks to enforce, he’s been there 11 times. Each time, the state legislature has defied the state high court by declining to fund the schools at the court-ordered level. The latest ruling gave the state legislature until spring to provide adequate school funding, and even with a supportive governor, Robb isn’t confident.

“It’s this cat and mouse between the legislative branch and the judicial branch on whether they have to comply or not,” says Robb, who practices law at Somers, Robb & Robb in Newton, Kansas. “In school finance … when you win your lawsuit at the trial level and you win at the appellate level, you have exactly nothing.”

It may be tempting to view Kansas—a conservative state with a recent fiscal crisis—as an outlier. If so, turn your attention to the blue state of Washington, where the state supreme court fined the legislature $100,000 a day for nearly three years for failing to adequately fund the schools. That case, McCleary v. State of Washington, wrapped up last summer after 11 years.

And that’s the other problem with school lawsuits: Winning is only half the battle. Enforcing the judgment, when the debtor is the state legislature, can stretch these lawsuits out for many years. Sciarra says it’s strictly politics.

“Their economies can support increased taxes and investment in public education,” he says. “But many of these states have been controlled by governors and legislatures that are unwilling to do that.”

In the New Mexico case, however, attorneys at the New Mexico Center on Law and Poverty, which represented the Yazzie plaintiffs, are optimistic. Singleton’s ruling gave the state until April 15 to come up with the resources necessary for bringing the state’s schools up to standards, and the center has used part of that time to build a coalition pushing for substantial change in the state’s school system, Transform Education NM.

This goes beyond just adding more money, Sanchez says. Part of the ruling called on the state to provide more of the bilingual and culturally relevant education called for in the state’s Indian Education Act, Bilingual Multicultural Education Act and Hispanic Education Act. Those are part of the platform proposed by Transform Education NM, along with more general concerns, including lowering class sizes and increasing financial aid to poorer communities. “It’s not just about putting more money in as a solution to address the output, it’s also about thinking creatively about what those inputs are,” he says.

It’s still going to take a lot of money. Sanchez’s colleague Lauren Winkler says inflation-adjusted school funding has dropped since the 2008 recession. The state will have to more than make up for that to implement their platform.

Winkler says there are good signs: They have grassroots support; Gov. Michelle Lujan Grisholm has made education a priority; and the state expected to end the fiscal year with a budget surplus. “I think this is kind of a historic moment in New Mexico for education,” Winkler says. “There’s a huge opportunity to make big change, and there’s a big movement behind that as well.”

This article was published in the April 2019 ABA Journal magazine with the title "Dismal Grades."