Student loans should be easier to discharge in bankruptcy, ABA argues 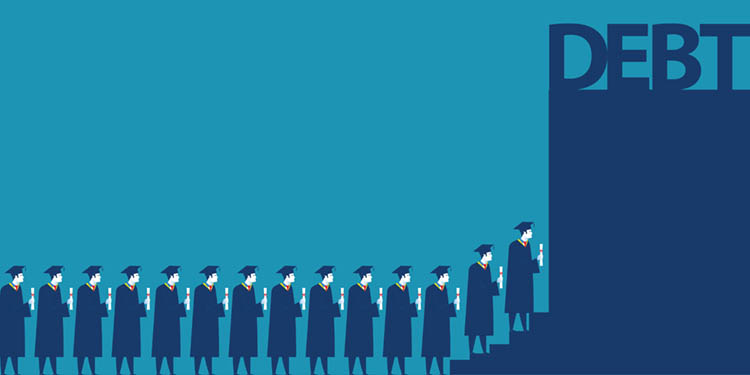 Student debt is a real and present crisis,” Christopher Jennison told the ABA House of Delegates in August at the ABA Hybrid Annual Meeting.

Jennison, then a Maryland State Bar Association delegate and YLD assembly speaker, had risen to introduce Resolution 512. It urges Congress to amend the U.S. Bankruptcy Code to allow borrowers to discharge student loans without proving that repayment of the debt imposes an “undue hardship” on them or their dependents.

Jennison pointed out that the division previously brought a resolution to the midyear meeting in February that urges Congress and the executive branch to develop and implement programs to help law students and graduates who are experiencing financial hardship because of their loan obligations. He told the House, which overwhelmingly approved the resolution, to think of this measure as the next logical step.

“While there are other policy solutions to address the underlying causes of high student debt and the high cost of legal education, it is imperative to create a lifeline for those who are several years into practice and are drowning in debt by removing hurdles to clearing insurmountable educational debt in bankruptcy proceedings,” said Jennison, who now serves as a delegate-at-large to the House.

Debt with a difference

In 2019, more than 44 million borrowers owed more than $1.5 trillion in student loan debt, according to data from the Federal Reserve cited in the report accompanying the resolution. It was the second-highest consumer debt category, behind only mortgages.

Student loans were treated differently from other dischargeable debt after Congress passed the Education Amendments Act of 1976, which prohibited borrowers from discharging these types of loans in bankruptcy for the first five years of their repayment unless they could establish undue hardship.

The Student Loan Default Prevention Initiative Act of 1990 extended the student loan discharge exception to seven years, and the Higher Education Amendments Act of 1998 amended the bankruptcy code so that federally guaranteed student loans could not be discharged at all unless the borrower could prove undue hardship.

Interpretation of what constitutes an undue hardship has fallen to the federal courts, which have disagreed over what borrowers must do to prove they meet this threshold, the resolution’s report says.

In addition to other factors, most courts have said borrowers must show they cannot maintain a minimal standard of living for themselves or their dependents if they repay their student loans.

Aaron Sohaski, director of student loan debt and financial wellness for the YLD, said that while it is not impossible to discharge student loans in bankruptcy, the process imposes an unnecessary challenge for lawyers with significant amounts of debt.

“Like anyone faced with a personal decision to file for bankruptcy, lawyers choose this option as a last resort, and the undue hardship threshold makes this difficult task even harder,” Sohaski told the House. “Many student loan borrowers recognize they won’t be able to find success, and therefore they won’t even try.”

In early August, Durbin and Sen. John Cornyn, R-Texas, introduced the Fresh Start Through Bankruptcy Act of 2021. The bipartisan bill would allow federal student loans to be discharged without an undue-hardship showing once borrowers have been in repayment for at least 10 years.

Resolution 512 was co-sponsored by the YLD, Law Student Division and Standing Committee on Paralegals.

This story was originally published in the October/November 2021 issue of the ABA Journal under the headline: “The Hardship of ‘Undue Hardship.”