What do Supreme Court advocates do with their feather quill mementos? 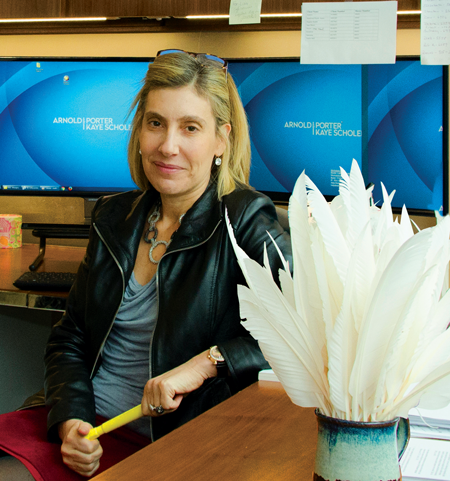 Lisa Blatt keeps 34 pens on display in her office—one for each of her high court arguments. Photograph Courtesy of Arnold & Porter Kaye Scholer.

The Supreme Court is a place of tradition. It is an institution of custom and continuity—from the seniority system that decides where the justices sit on the bench to who answers the door during their secret conferences to the handshake before they deliberate.

One unique tradition, maintained since “the earliest sessions of the court,” according to the Supreme Court’s public information office, is presenting goose-feather pens to advocates who appear for oral argument.

The practice reportedly dates back to the early 1800s, when Chief Justice John Marshall provided lawyers with quill pens and inkwells to take notes. Today, “one set of two quill pens is placed before each chair at counsel’s table at every oral argument,” according to the information office.

“The pens are a perfect memento of your trip to the Supreme Court,” says Gregory Garre, a partner and global chair at Latham & Watkins’ appellate practice and a former U.S. solicitor general—the government’s top lawyer in the court. “Sometimes they invoke very pleasant memories, and other times very painful ones.”

The keepsakes don’t just land in the hands of the lucky few who argue cases. “Typically, there are several quills on counsel’s table so that you can share them with your colleagues who have worked just as hard on the case but may not have the chance to argue,” Garre says.

The high court estimates that it distributes 650 sets of hand-cut goose quills each term. Garre got his first pen from John G. Roberts Jr. before the chief justice joined the high court.

Lisa Blatt, head of Arnold & Porter Kaye Scholer’s appellate practice, has in her glass-walled office a vase with 34 pens—one for each of her arguments. “I keep one for myself and give the rest to clients or my team,” she says.

For some lawyers, the pens become family heirlooms. Cliff Sloan, a high court advocate who wrote a book on Marshall, gave each of his three children a framed quill as a high school graduation gift.

Sloan isn’t alone. “When my kids were a certain age, I gave them some to play with,” says Kannon Shanmugam, Williams & Connolly’s appellate head, who has argued 19 cases. “They still display them in their rooms.” Shanmugam summed up the practice perfectly: “The Supreme Court prizes tradition and continuity. The giving of quills is one of the court’s great traditions.”

This article originally appeared in the April 2017 issue of the ABA Journal with this headline: "Feather in Your Cap: Supreme Court advocates carry home traditional mementos."