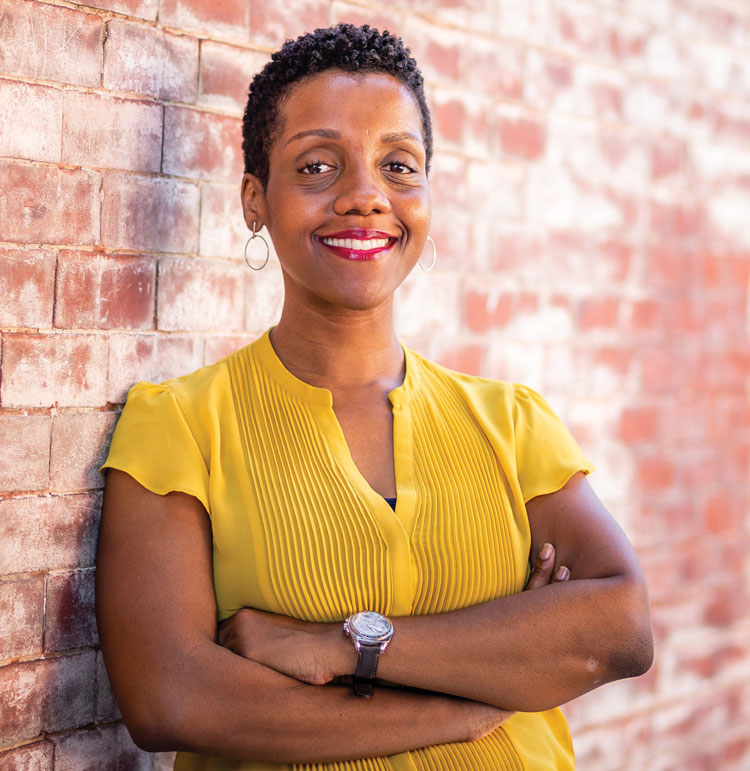 As a public defender in the Bronx, New York, for almost a decade, Adeola Ogunkeyede saw firsthand how patterns of institutional racism and systemic inequality impacted her clients even before they entered the criminal justice system.

She started to wonder: Was there a way to break those destructive cycles? Could legal aid unite with local leaders to identify the most problematic points of contact between directly impacted communities and the criminal justice system—then fix them?

The answer, she discovered, was yes.

In 2017, Ogunkeyede joined the Legal Aid Justice Center in Charlottesville, Virginia, to help launch the Civil Rights & Racial Justice Program. The purpose was exactly what she had envisioned: Legal aid lawyers supported community-led efforts to promote criminal justice reform across the region. Working together with community advocates, the program helped repeal Virginia’s “habitual drunkard” law, which disproportionately affected people experiencing homelessness. They also got the state to stop automatically suspending driver’s licenses for unpaid court debt. Their efforts also resulted in the creation of a police civilian review board in Charlottesville, only the third such organization in the state.

Ogunkeyede is now training her efforts toward Texas. This spring, she moved to the Lone Star State to establish the first-ever public defender’s office serving Travis County, which includes Austin, the state capital. Travis County had been the largest jurisdiction in the country without a PD’s office.

You started a challenging position in the middle of a pandemic and during one of the most far-reaching racial justice movements in recent history. You also began the Civil Rights & Racial Justice Program in Virginia the summer that the Ku Klux Klan held rallies in Charlottesville and a young woman was murdered while marching for racial equality.

And my first week of law school was also when Katrina happened.

Oh, wow! You were at Tulane law school at the time, right?

It was definitely not what I had envisioned for law school. I was lucky because another law student was kind enough to let me ride with her that Sunday night to Baton Rouge. We had no idea that we were part of one of the largest mass evacuations in U.S. history.When I got back, the city was fundamentally changed, and the sense of loss was pervasive.

Are you following the sociologists and researchers drawing connections between Katrina and the crises we’re facing today?

Yes. It’s fascinating from an academic standpoint, but it’s frustrating when you’re living in it—when it’s your life. Crises like these all share the same throughline when it comes to the people who are most vulnerable. It leads you to question, “What are we, as a society, doing?” Where we see a crack in our societal structure, our first thought should be, “Who will fall through first?” It’s not a coincidence that the people who are falling through the cracks during the pandemic bear a striking resemblance to those who fall through the legal system. The connection is structural racism and poverty.

How did you first get involved with the criminal justice movement?

For me, this movement is bigger than criminal justice. As a Black girl whose mother is a descendant of slaves and whose father is an immigrant, my experiences tell me we have to do better as a country. My training is as a lawyer, and the criminal justice system has always been particularly vicious to people who share my background because of that background. But if I weren’t a public defender, I would be doing this work in some other way.

What inspired you to become a lawyer in the first place? Did you did you grow up around lawyers?

There are no lawyers in my family. My dad came to the country in 1974 from Nigeria and had a typical immigrant experience where he worked several jobs to put himself through school. My mom was born in the Jim Crow South in 1950, and her family migrated to New York City on the back half of the Great Migration. I will say this: My father was born in 1949, when Nigeria was still a colony. It didn’t have democratic elections until 1999. He’s always been someone who has turned his eye toward the country he was born in and said, “We have to do better.” He was very active in advocating for democracy. It was not lost on me that this is what you do: You turn your gaze to your country and ask, “Can we do better?”

You specialize in harnessing the power of community-led advocacy to effect change. How do you establish trust with the communities you’re trying to help?

I think the way you build that connection is by showing up. If you want to be community-led, you have to show up where the community is. Lawyers love to be in court and in the office, but a lot of the work I did was going to where the people were. I held meetings everywhere from the local library to community centers. I put close to 40,000 miles on my car the first year I was in Virginia! It’s also about building trust as an advocate. You want to be a partner to them—to work alongside them to shape the policies and advocate for change. I am not coming in to tell you what to think; I am coming in to ask you what you want and to learn what you want and what you need and to help you advocate for that.

Let’s talk about the new PD’s office. Are you taking cases yet?

We don’t expect to be taking cases until January 2021. First, we had to operationalize the office—buy computers, buy desks, hire an office manager. Then, we’ll start to staff up. By September 2021, we expect to build out our staff by 17; by 2024, we expect to be a staff of 67, including 30 to 40 lawyers.

Your initial grant term is four years. If you had no barriers to achieving your goals, what would you like to accomplish during that time?

What we want to accomplish is cultural change in a very narrow sense: That the role of the public defender—standing together with their client in defense of their client—be given its rightful place in Travis County.

It’s the job of the public defender to challenge the system and question the processes on behalf of their client. We do that by ensuring we are heard on the record about every issue that may violate or compromise our clients’ rights. That may be uncomfortable, that may seem like the public defender is trying to challenge the status quo, but that’s good.

Ultimately, you’ll have clients who will go to jail, who will have outcomes they are not happy about. What do you want their experience with the Travis County Public Defender’s Office to be like?

At the end of the day, I hope clients can say they feel like their lawyers fought to bring them closer toward justice. Even when outcomes are not just and don’t feel right, clients should be able to feel like there’s a champion on their side, fighting to make the process—which is punishing all by itself—not so painful. And that is no small feat.

This story was originally published in the Dec/Jan 2020-2021 issue of the ABA Journal under the headline: “Pattern Recognition: The new chief public defender for Austin, Texas, works to empower communities and end criminal justice disparities.”