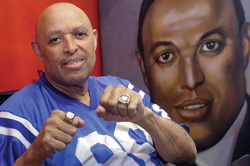 John Mackey with his Super Bowl and Hall of Fame rings at his Baltimore home in 2007. Photo by AP/Steve Ruark.

Legendary Baltimore Colts tight end John Mackey left a mark on football as few players have. Before Mackey came to the National Football League in 1963, tight ends generally were big oafs who blocked and caught short passes over the middle. But the Colts had something else in the 6-foot-2-inch, 230-pound rookie out of Syracuse who could catch the deep ball with laser 4.6 speed.

Yet football also left a deeper and indelible mark on Mackey. He died July 6 at age 69 after struggling with dementia for more than a decade. The suspected cause: brain damage from nine seasons of repeated concussions suffered during games and practice.

Now scores of former NFL players are striking back, with at least three lawsuits alleging the league intentionally concealed from them for decades links between persistent head knocks and brain damage. Though individuals have successfully sued the NFL over head injuries in the past, the new round of litigation casts a wider net and comes as the league and the NFL Players Association enter into a new 10-year contract that plaintiffs lawyers hoped would deal with retirees’ concerns.

“We were hoping the collective bargaining agreement would address this,” says Philadelphia plaintiffs lawyer Larry E. Coben, who in August filed an ambitious class action against the NFL in federal court. “When we didn’t get that, we had nowhere else to turn.”

Another 75 players and spouses filed a collection of individual complaints in July under a single case in California state court. A second similar suit filed in California court covers another 17 players and their spouses. Besides naming the league, both include allegations against helmet maker Riddell Inc. The wives allege loss of consortium. The California cases also up the potential payout in the end by expressly asking for punitive damages.

But the most closely watched action may come in Philadelphia, where seven players and their wives filed the fledgling class action—the first of its kind—that could grow to include thousands of members if it survives. Besides trying to add more retirees to the case, the plaintiffs also have raised the stakes by designating a subclass for current players. The plaintiffs also want medical monitoring in addition to money damages.

“I think these cases are much more challenging,” says Baltimore plaintiffs lawyer Cy Smith, who represented the estate of Pittsburgh Steelers Pro Bowl center and Super Bowl champion Mike Webster in the first successful head-injury court case against the NFL pension plan. Webster, 50, died in 2002 after unsuccessfully trying to get the hair-splitting pension plan to pay him benefits that may have amounted to just a few thousand dollars a month. A federal court awarded the estate nearly $1.7 million in 2005, including $137,000 in legal fees.

All the complaints essentially allege that the NFL ignored studies and other evidence linking brain damage and football that date to the late 19th and early 20th centuries. One evokes the great coach Pop Warner, who in 1913 noted he had “many times seen cases where hard bumps on the head so dazed the player receiving them that he lost his memory for a time and had to be removed from the game.”

The players say the league even disputed its own studies. In 2007, retired Chicago Bears safety Dave Duerson cast doubt on a link to brain damage in testimony before a congressional committee with comparisons to his father, who had Alzheimer’s disease but never played a professional sport.

Duerson may not have known what was happening, but his life changed profoundly about the same time. He testified that his business failed, his suburban Chicago home went into foreclosure, he pleaded guilty to misdemeanor domestic battery, and he filed for bankruptcy.

The 50-year-old Pro Bowler and Super Bowl champ shot himself in the chest on Feb. 17, presumably so researchers could study his brain for signs of chronic traumatic encephalopathy, a disease caused by repeated blows to the head. His request came in a bizarre text message to his ex-wife, Alicia. A subsequent examination revealed that Duerson had the condition.

Duerson also sat as a player representative on an NFL board that determines eligibility for head-injury disability benefits under the league’s in-house program, called the 88 Plan (for Mackey’s number with the Colts.)

Though the league doesn’t release the board’s votes to the public or the players, Duerson’s lone vote on the six-member panel probably didn’t make a difference, as through June the 88 Plan had approved benefits totaling nearly $13 million for 166 players and denied them to just 13 since its 2007 inception.

Ultimately the NFL publicly admitted in 2007 that it had been studying the effects of brain damage since the early 1990s. But it was not until June 2010, the players maintain, that the league warned them and acknowledged that concussions can cause dementia, encephalopathy, memory loss and related conditions.

Especially perplexing for the plaintiffs, high schools and colleges recognized the problem in the 1970s, and governing organizations for both began requiring that all helmets meet tougher new safety standards. High schools and colleges also recognized players were using helmets as offensive weapons, so they instituted rules restricting the practice.

Besides issuing seldom-enforced rules on spearing, the NFL did nothing, even coaching players through the 1990s on techniques for hitting an opponent with the helmet, the players allege. And although the league keeps instituting new on-field rules in the name of player safety, including this season’s controversial kickoff from the 35-yard line, they don’t help folks who played decades ago. Moreover, they risk changing the game forever, which poses a dilemma for individual plaintiffs lawyer Thomas V. Girardi of Los Angeles.

“At the end of the day, the players don’t want to hurt the game,” Girardi says.

The NFL’s administrative procedure for determining disability operates on a no-fault basis, asking only whether a player’s injury caused the disability without laying blame. A court case is a trickier proposition that demands some level of fault, not to mention other elements. The NFL has a reputation as a tenacious litigator, and the plaintiffs lawyers believe league spokesman Brian McCarthy’s promise that the NFL will “vigorously contest these claims and any similar allegations.”

In cases filed as individual claims, the lawyers expect the NFL to spend millions of dollars and thousands of hours to meticulously attack them one by one.

“Yeah, but sooner or later some jury’s going to look at that,” Girardi says. “So scorched earth doesn’t bother me if we can get this before a jury.”

The class action may condense some of that activity if the court certifies it and signs off on five proposed subclasses dating from the 1970s, including one for current players. Subclasses also may alleviate proof problems for some plaintiffs, especially those with older claims with less evidence supporting them than newer ones.

Meanwhile, the tales of Mackey, Webster, Duerson and other injured players sound eerily similar. Mackey once bolted past airport security guards who asked him to remove his Super Bowl and Hall of Fame rings, mumbling “I got in the end zone” as they wrestled him down. Webster, who never held a steady job after retirement, at one point was reduced to living out of his car. In his later years, Duerson complained of memory loss, depression and impaired judgment.

Mackey eventually had to move into an assisted-living facility, where the bills far exceeded his $2,500 monthly NFL pension and forced his wife, Sylvia, to take a job as a flight attendant to make ends meet. At her wits’ end, Sylvia Mackey asked then-NFL Com missioner Paul Tagliabue for help in May 2006 in an impassioned three-page letter, nearly bringing him to tears with her description of dementia as “a slow, deteriorating, ugly, caregiver-killing, degenerative, brain-destroying, tragic horror.”