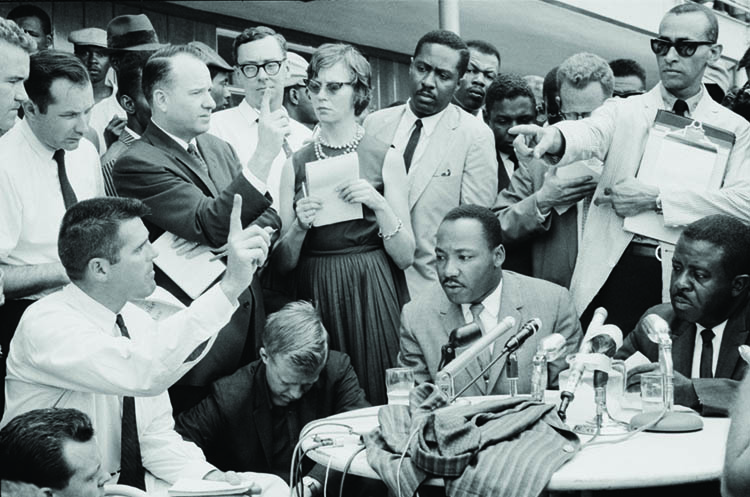 Clarence B. Jones, shown in 1963 standing behind Dr. Martin Luther King Jr.’s right shoulder, helped write some of King’s most memorable works, including the “I Have a Dream” speech. Photo by Ernst Haas/Hulton Archive/Getty Images

Angela Scott believes that when you choose to honor someone, you should make it as meaningful as possible.

Clarence B. Jones, a civil rights leader and member of Martin Luther King Jr.’s legal team, deserved the Section of Civil Rights and Social Justice’s recognition as this year’s Thurgood Marshall Award recipient. But she thought being acknowledged by former President Barack Obama would be an even higher honor.

Scott requested Obama through official channels but also tapped her personal network of friends and colleagues to make sure he received the message.

“I received the news via text message from one of my best friends on a Friday afternoon in May, and it was exactly the news I needed to hear at the time,” says Scott, a civil rights attorney who finished her term as chair of the Section of Civil Rights and Social Justice in August. “To say I was thrilled would be the understatement of the year. President Obama found our honoree, Dr. Jones, worthy of his time and tribute.”

In his surprise virtual appearance at the award ceremony, which was held during the ABA Hybrid Annual Meeting in August, Obama said Jones helped “bend the arc of history towards justice and freedom.”

Jones helped organize King’s 1963 March on Washington and write his “I Have a Dream” speech. He also took King’s handwritten notes from jail in what became known as the “Letter From Birmingham Jail.”

In accepting the award, Jones thanked all those who encouraged him to succeed and who worked to advance civil rights, including King. He also expressed gratitude to the Black Lives Matter movement “for reminding our country that the minds and bodies of Black men and women are sacred and dear, in need of protection against the use of excessive force.”

Obama said during his tribute that Jones was the “ultimate inspiration” when he was a young lawyer hoping to make a difference.

“He was an attorney, a writer, an activist,” Obama said. “He did it all.

The former president said lawyers can honor Jones by playing a role in the fight for justice.

Too often, Obama said, the law “serves to regulate the affairs of the powerful instead of protecting the powerless.”

“But the law is also memory,” he said. “It records a long-running conversation, a nation arguing with its conscience. As lawyers, you can keep that conversation going, whether it’s about how to guarantee every American the right to vote or how to eliminate racial bias in our criminal justice system. And you can reach back to give the next generation of lawyers a hand up, especially those who might not have access to the same resources or support systems that you did.”

‘A call to action’

In introducing Jones during the award ceremony, Scott thanked him for reminding lawyers that they must revisit their pasts and learn that they can continue to progress toward a society that truly represents justice for all.

“Dr. Jones was a regular attorney—he helped Dr. King with his convictions, with intellectual property/copyright matters,” Scott says. “But he was smart, talented, capable and trustworthy, and he chose to give of his time and efforts in this way.

“All of us can do that. We can all make some sort of positive, meaningful difference. The fact that President Obama appreciates the impact of this—sometimes unsung—individual, and he finds Dr. Jones’ work worthy enough to pay tribute, conveys that message. You don’t have to be Dr. Martin Luther King Jr. to make a significant impact.”

This story was originally published in the October/November 2021 issue of the ABA Journal under the headline: “Honorable Service: Thurgood Marshall Award recipient gets surprise tribute from Obama.”