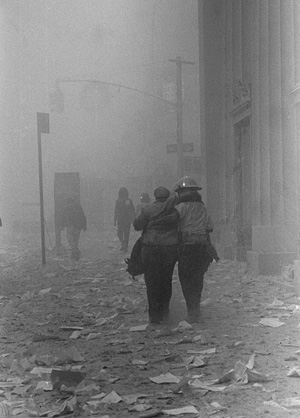 Ten years after the horrific attacks of Sept. 11, 2001, top-level U.S. government officials are raising the possibility that a strategic defeat of al-Qaida may be in sight.

During his first visit to Afghanistan after becoming secretary of defense on July 1, Leon Panetta indicated that U.S. intelligence has now identified 10 to 20 key leaders of al-Qaida in Pakistan, Yemen, Somalia and North Africa. “If we can be successful at going after them,” Panetta said, “I think we can really undermine their ability to do any kind of planning, to be able to conduct any kind of attack” on the United States.

Gen. David Petraeus, the former military commander in Iraq and Afghanistan who will replace Panetta as CIA director in September, recently expressed similar views. “There has been enormous damage done to al-Qaida,” said Petraeus during his last media interview before leaving Kabul. “That has very significantly disrupted their efforts, and it does hold the prospect of a strategic defeat, if you will, a strategic dismantling of al-Qaida.”

But even before al-Qaida leader Osama bin Laden was killed by U.S. troops in May during a raid on his compound in Pakistan, counterterrorism experts were suggesting that al-Qaida’s capabilities had been significantly degraded.

No one is saying we are out of the woods. Al-Qaida and its fringe groups are highly adaptive, and their desire to strike the West is undiminished. Even as the United States and its allies have degraded the terrorists’ ability to perpetrate large assaults, the likelihood of smaller-scale attacks against targets around the world actually has increased.

Moreover, the past several years have been marked by a trend toward plots or attacks by independent groups and individuals, often inspired by al-Qaida but with no direct operational link. What impact a “strategic defeat” of al-Qaida would have on these adversaries, or on “homegrown” terrorists, remains to be seen.

It’s clear that al-Qaida’s ideological appeal was dealt a significant blow by the events of the Arab Spring, which dramatically demonstrated the emptiness of the call for a global jihad.

Before 9/11, most terrorist groups were regionally focused, targeting local regimes that they saw as corrupt. Bin Laden had tried to convince these groups to join his battle against the United States and its allies. He argued that they couldn’t change their local regimes, the “near enemy,” because those regimes were backed by the “far enemy,” the United States and other Western nations. The only way they could succeed with their local objectives, he maintained, was to join his global jihad against the far enemy.

His argument didn’t really gain significant traction until after 9/11. That attack showed these groups that it was possible to reach the far enemy. More important, however, the 9/11 attacks provoked the United States into declaring its own global war, which bin Laden used to support his claim that Muslims were called to join in the global jihad. No matter how often U.S. leaders asserted that they were not engaged in a war on Islam, bin Laden and his followers pointed to America’s global war to inspire new recruits.

One reason the Arab Spring was so devastating to bin Laden’s strategy was that the near enemy was overthrown by the efforts of local populations, not as a result of the global jihad. For more than 10 years, the promised rewards of the global jihad were nowhere to be seen.

And when courageous citizens rose up to throw off oppressive regimes, al-Qaida simply sat on the sidelines and criticized the protests as “tainted” by notions of democracy. The ideological bankruptcy of the global jihad was evident to anyone watching the events of this spring unfold.

Undermining the appeal of a global movement could have significant long-term benefits. A return to largely localized terrorist efforts, while certainly not a complete victory, would significantly lessen the threat to Americans. Moreover, local terrorist groups that lack backing by a globalized support network should be somewhat easier for local governments to defeat or at least neutralize.

Nowhere is this strategy to undermine global jihad more important than in Somalia, where some leaders of the insurgent group al-Shabab, who are in contact with al-Qaida, are pressing to expand the group’s focus beyond the internal battle against the government and neighboring Ethiopian forces. Whether those voices prevail may depend significantly on whether the strategies and actions of the United States, its allies and countries in the region wind up reinforcing or undermining the call for a global holy war.

There is a move in Congress, for instance, to reaffirm the global war against al-Qaida and “affiliated forces.” Supporters of this effort are concerned that the Authorization for Use of Military Force that was enacted only days after the 9/11 attacks no longer provides a clear legal basis for the expanding scope of U.S. military and intelligence efforts.

Opponents worry that a largely symbolic reaffirmation of a global war at this particular time risks breathing new life into the global jihad. Moreover, President Barack Obama has not sought any new authority and has strongly objected to such a provision in the National Defense Authorization Act for Fiscal Year 2012, as passed by the House of Representatives (the Senate has yet to act), on grounds that it would recharacterize the scope of the conflict.

In an introductory letter to the National Strategy for Counterterrorism (PDF) that was issued in June, Obama wrote, “Though there are many potential threats to our national security, it is the terrorist threat from al-Qaida that has loomed largest in the decade since Sept. 11, 2001. And yet today, we can say with growing confidence—and with certainty about the outcome—that we have put al-Qaida on the path to defeat.” But, the president said, “success requires a strategy that is consistent with our core values as a nation and as a people.”

A key element of that strategy is the strength that comes from our commitment to the rule of law.

The traditional mantra about “balancing national security and civil liberties” is misleading. It assumes that these are mutually exclusive values on opposite sides of a scale; if you subtract from one, you necessarily add to the other. In reality, security and liberty are reinforcing values. As the National Strategy states, “The power and appeal of our values enables the United States to build a broad coalition to act collectively against the common threat posed by terrorists, further delegitimizing, isolating and weakening our adversaries.”

At home, policymakers and the public must understand that there are national security costs associated with undermining civil liberties, and the checks and balances between government branches. As we work to better detect and deter terrorist activity inside the United States, for example, we need to remember that solutions do not always come from broader investigative authorities.

Overseas, the use of drones has contributed to military advances in Afghanistan and the border region of Pakistan. They also have angered local populations, which complicates counterinsurgency efforts. Drone strikes, particularly outside a zone of active combat or in countries with which the United States is not at war, generate legal debates about issues of sovereignty and the legitimacy of military action against nonstate entities. Moreover, these activities raise questions about the role of Congress in overseeing intelligence efforts and in authorizing military actions.

Politicians sometimes accuse their opponents of having a “Sept. 10 mindset,” implying that they don’t understand the threat we face. The greater risk, however, may be failing to move beyond a “Sept. 12 mindset.” On that day after the horrible attacks against the World Trade Center and the Pentagon, we lived with a deep sense of vulnerability as we waited in fear for the next attack. Over the subsequent days, months and years, however, Americans returned to their daily lives. We learned that resiliency is an essential and powerful weapon against terrorism. We know there may be another attack, but we refuse to live in—or act out of—fear.

Ten years after the 9/11 attacks, America continues to face a determined and potentially deadly adversary. But this is an opportune time to step back and carefully assess where we are in the fight against terrorism, how we got here, what future we want, and the best path forward. The threat today is not the same one we confronted on Sept. 11, 2001, or even on Sept. 11, 2010. As the threat continues to evolve, so must our strategy for dealing with it.

Suzanne E. Spaulding has worked in the national security law field for more than 25 years, holding posts in both government and the private sector. She is of counsel at Bingham McCutchen in Washington, D.C., and a principal at Bingham Consulting Group, where she works with clients to develop strategies for dealing with issues related to national security. She is a past chair of the ABA Standing Committee on Law and National Security and currently serves as special adviser to the committee.