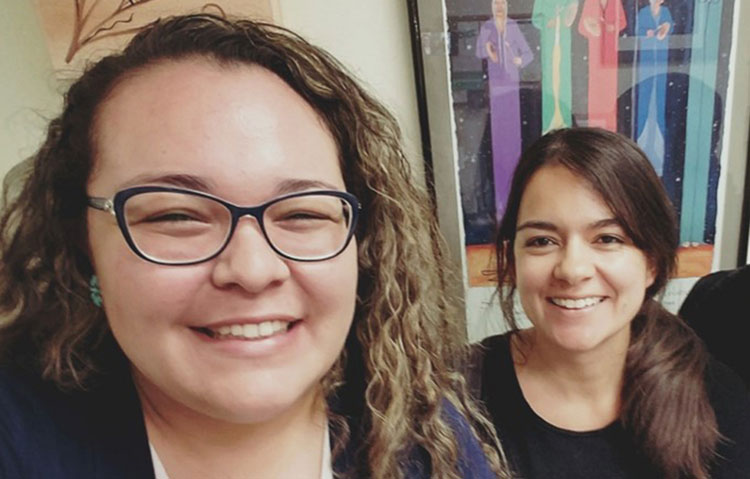 Lauren van Schilfgaarde and Heather Torres introduced the ABA to the missing and murdered indigenous women crisis in February by first sharing the stories of those who suffered.

One involved Savanna LaFontaine-Greywind, a 22-year-old Spirit Lake tribal member who was eight months pregnant when she disappeared from her Fargo, North Dakota, apartment building in 2017. Eight days later, her body was discovered in the nearby Red River. Her baby, who had been cut from her womb, was found alive at the home of a neighbor, Brooke Crews. Crews pled guilty to conspiracy to commit murder and kidnapping, and she was sentenced to life without parole.

“It’s really important to humanize this crisis because the data itself is daunting,” says van Schilfgaarde, the director of the San Manuel Band of Mission Indians Tribal Legal Development Clinic at the UCLA School of Law. “So much so that it’s not even fathomable, and so for me especially, it was important to include stories that were happening in real time as we were drafting this resolution.”

Those stories resonated with the ABA House of Delegates. At the midyear meeting in February, the body overwhelmingly approved Resolution 10A, which urges federal, state, local, territorial and tribal governments to “acknowledge and prioritize responding to the Missing and Murdered Indigenous Women (MMIW) crisis.”

It also calls on Congress to make accurate national data collection on the MMIW crisis a priority and give tribal access to those databases; develop interjurisdictional protocols for tracking and responding to the crisis; and provide training for law enforcement and funding for tribal justice systems.

Both van Schilfgaarde and Torres, the program director at the Tribal Law and Policy Institute in West Hollywood, California, have drafted resolutions for the ABA Section of Civil Rights and Social Justice’s Native American Concerns Committee, but they consider this one the most difficult. Not only did the women’s stories weigh on them, but the data—which has mostly been collected by tribes themselves—demonstrated a dire emergency.

American Indian and Alaska Native women are nearly twice as likely as non-Hispanic white women to have experienced rape in their lifetime, according a study cited by the report that accompanies Resolution 10A. And in some U.S. counties, per a 2008 National Criminal Justice Reference Service report, indigenous women were murdered at a rate that was more than 10 times the national average.

“There can no longer be inaction,” Torres says. “We are seeing even with preliminary data that has been done by indigenous folks that it is an issue, and it needs to be moved on now, even while we are trying to collect more data and get the mechanisms in place to share that data.”

Torres and van Schilfgaarde were connected long before they began researching the MMIW crisis.

Torres is a member of the San Ildefonso Pueblo, which is outside of Santa Fe, New Mexico, and she is also a descendant of the Navajo Nation. She grew up in Southern California, where her great-grandparents were sent to boarding school for assimilation in the 1920s.

She earned her bachelor’s degree in English and American Indian Studies from UCLA. She is also a 2017 graduate of the UCLA School of Law, where she focused her studies on federal Indian law.

Torres was the director of Native Student Programs at the University of Redlands before moving in 2019 to the Tribal Law and Policy Institute, where she worked as a fellow after law school. She now helps provide training and technical assistance to tribal nations as they develop their governance structures.

Van Schilfgaarde is a member of the Cochiti Pueblo, near the San Ildefonso Pueblo. She was born in Santa Fe, raised in Albuquerque and graduated from Colorado College in Colorado Springs with a bachelor’s degree in religion.

She also graduated from the UCLA School of Law and joined the Tribal Law and Policy Institute after graduating in 2012. She served as the director of its Tribal Healing to Wellness Court Training and Technical Assistance Project before leaving last year to supervise clinic projects at her alma mater that provide legal assistance to native nations.

Torres and van Schilfgaarde first met at the Tribal Law and Policy Institute, where they focused on preventing violence against native women. They continue to work together as members of both the ABA and the National Native American Bar Association.

“There are only a handful of places that are open and value and prioritize these types of issues, and so it’s funny we’re connected; but in another way, it’s not a coincidence,” van Schilfgaarde says. “Of course we end up in the same school and in the same organization, because those are the spaces that are having these conversations.”

The story behind Resolution 10A begins with ABA President Judy Perry Martinez and Secretary Mary Smith’s trip to the Coushatta Tribe in southern Louisiana in December.

While there, Martinez heard about the MMIW crisis. She realized that although the ABA has a long history of supporting Native American interests, it did not have policy related to the crisis. “When I looked around the room and met with members of the Coushatta Tribe and realized that they were expressing not only concerns but a passion for having the issues involved in these untold stories addressed, I realized that the American Bar Association could assist them in that struggle,” she says.

Smith, an enrolled member of the Cherokee Nation, returned to the Native American Concerns Committee and asked van Schilfgaarde and Torres if they could quickly write a draft. She also asked the Massachusetts Bar Association to sponsor the late resolution.

They agreed, and by the ABA Midyear Meeting, they had received support from numerous entities and other affiliate bar associations.

“The comments I heard from the Massachusetts bar is that it was one of the most well-written resolutions they had ever seen, especially given that it was drafted only in a couple weeks, and some people work for months or even years on their resolutions. It shows the incredible job that Heather and Lauren did,” Smith says.

Torres and van Schilfgaarde hope the ABA can soon advocate for specific legislation, including Savanna’s Act, named for LaFontaine-Greywind. Among other things, it directs the attorney general to develop protocols that address MMIW cases.

“We need to transition to, ‘What does life look like moving forward?’” she says. “There are still murder cases and missing cases that are not solved. What are we going to do about it?”

Torres also helped draft Resolution 116 for the midyear meeting. It urges Congress to reauthorize the Violence Against Women Act or similar legislation that provides funding for tribal governments and recognizes “the inherent authority of American Indian and Alaska Native governments to prosecute non-Indian perpetrators of crimes arising from gender-based violence.”

The House of Delegates overwhelmingly supported this measure.

“I am a brand-new baby lawyer, just out of getting barred, and I’m already seeing so much of the work that the ABA is undertaking have an impact,” Torres says. “I really see the ABA as an advocate for tribal nations, and that is an immense reason why I am already so committed.”

This story was originally published in the August-September 2020 issue of the ABA Journal under the headline: “Telling Untold Stories: Two young Native American lawyers call for action on missing and murdered indigenous women”