Voting access and protection against violence for Native Americans should be top priorities, ABA House says

By Amanda Robert and Lee Rawles 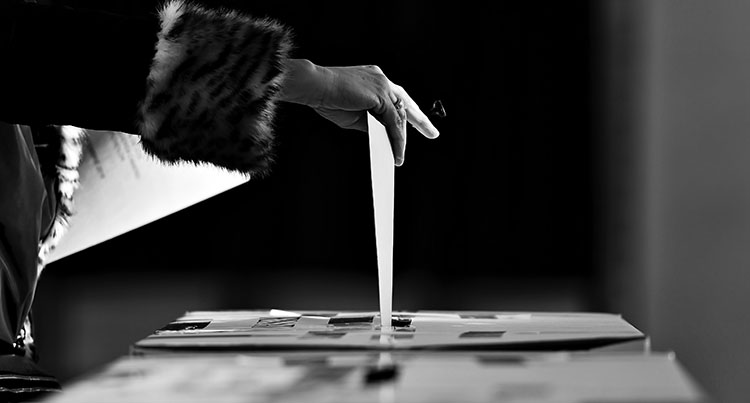 Ahead of this year’s presidential election, the ABA House of Delegates overwhelmingly passed a pair of resolutions that aim to increase voter participation and minimize voter suppression.

Resolution 112, submitted for the ABA Midyear Meeting by the Section of Civil Rights and Social Justice, urges jurisdictions to remove barriers for Native Americans and Alaska Natives by providing equal access to voter registration and polling sites; treating tribal identification cards the same as state and local identification cards; notifying and obtaining consent from tribal leaders before moving or closing registration or polling locations on their lands; and providing adequate language assistance to voters.

There are 573 federally recognized tribes and hundreds of state-recognized tribes in the United States, and according to the 2010 census, 5.2 million people self-identified as American Indian and/or Alaska Native, per the report accompanying the resolution.

A study by the National Congress of American Indians, also cited in the report, showed that 34% of American Indians and Alaska Natives are not registered to vote, versus 26.5% of non-Hispanic whites. In addition, according to the study, an estimated 1.2 million eligible Native Americans could be missing from the voter rolls.

Mark Schickman, a delegate from the Civil Rights and Social Justice Section and of counsel with Freeland Cooper & Foreman in San Francisco, spoke in favor of the resolution. He pointed out that Native Americans were not recognized as citizens until 1924, did not have the right to vote until 1948 and were not guaranteed the right to vote in every state until 1962.

“Ever since then, they have been facing challenges to the right to vote,” he said, citing “challenges to ID cards not being adequate, literacy issues and interpretation issues,” and long distances to travel to vote or even register to vote.

The resolution also urges the federal government to provide tribal leaders access to federal election observers; require the Department of Justice to consult annually with tribes on voting issues; and establish a Native American Voting Rights Task Force under the Justice Department to provide grant funds to increase voter education, registration and participation in tribal communities.

Additionally, the resolution calls on Congress to pass either the Native American Voting Rights Act of 2019 or similar legislation to improve access to voting for Native Americans and Alaska Natives.

Resolution 114 focuses on the disenfranchisement of otherwise qualified voters caused by traditional address requirements for voter registration, which could also have a disproportionate impact on Native American voters.

The resolution, submitted by the Coalition on Racial and Ethnic Justice, urges jurisdictions to allow a post office box; the address of a tribal building, shelter or local government building; or a general description of where a person lives to be used instead of a residential address for voting purposes.

The resolution also urges jurisdictions to enact legislation or regulations that assign a voter to the precinct in which he or she can be found, whether it is expressed by a traditional address or a nontraditional identifier.

Estelle Rogers, a delegate from the Civil Rights and Social Justice Section and the chair of the Standing Committee on Election Law, introduced the resolution to the House of Delegates. She contended that the disenfranchisement continues for thousands of voters who lack a traditional street address–including Native Americans living on reservations, people who are homeless or living on unnamed rural roads, or even urban voters who have undependable mail service.

In recent years, many states have passed stricter voter ID laws or imposed tougher registration requirements. According to data cited in the report accompanying the resolution, 18 states require a mailing address for voter registration.

Rogers pointed out that this is an especially under recognized problem for Native Americans, whose voter turnout rates are the lowest in the country compared with other racial groups.

Two recent lawsuits challenged a voter ID law in North Dakota requiring a residential mailing address, but Rogers told the House she was happy to report that a consent decree was filed in February ensuring Native Americans could vote without an ID showing a residential address.

“For this year’s elections and in the future, the tribes of North Dakota will have different rules in effect that hopefully will not disenfranchise them anymore,” she said. “But would-be voters in other states, whether Native American, homeless or rural, aren’t so lucky.”

Resolution 114 was co-sponsored by the Civil Rights and Social Justice Section, the Section of State and Local Government Law, the Commission on Homelessness and Poverty and the National Native American Bar Association.

The two election-related resolutions were not the only ones intended to bolster the rights of Native Americans. Resolution 10A, put forward by the Massachusetts Bar Association and supported by a number of ABA entities and other affiliate bar associations, entreats federal, state, local, territorial and tribal governments to “acknowledge and prioritize responding to the Missing and Murdered Indigenous Women (MMIW) crisis.”

According to the accompanying report, American Indian and Alaska Native women are statistically at least twice as likely as all other races to experience violence, rape or sexual assault. But the report also points to a lack of complete national data that tracks violence against indigenous women both on and off reservations, and in urban as well as ru ral areas.

Resolution 10A urges Congress to make accurate national data collection on the MMIW crisis a priority that includes tribal access to those databases; develop inter jurisdictional protocols for tracking and responding to the MMIW crisis; and provide training of law enforcement and funding for tribal justice systems.

The resolution passed with overwhelming support.

This article was originally published in the April/May 2020 issue under the headline, “Native Rights: Voting access and protection against violence for Native Americans should be top priorities, ABA House says.”