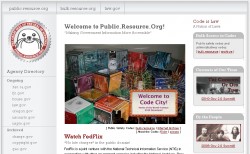 Yesterday, Public.Resource.Org Inc. had a bottom line of $1,900.40. Money was so tight that the nonprofit’s only full-time staff member, Carl Malamud, called its payroll company this week and put himself on a temporary furlough, he notes in an O’Reilly Radar blog post.

Today, however, Malamud, who was profiled as an ABA Journal Legal Rebel last year, is in the money: As the Official Google Blog announced today, his Law.Gov effort, a Public.Resource.Org project that works to make all primary legal materials in the United States available to everyone, has been awarded $2 million as part of Project 10^100.

“This is great,” Malamud tells the ABA Journal, explaining that the money will pay for another 100 terabytes of computer memory needed to store the vast quantities of public documents that he works with. It will also help cover six-figure costs for a demonstration project to put all briefs ever submitted to the San Francisco-based 9th U.S. Circuit Court of Appeals into an computerized format that would potentially allow them to be accessed and searched online.

As in the 9th Circuit project, law school collaborators have made much of this work possible—the copies of the needed briefs, for instance, were obtained from a law school’s collection rather than the court, Malamud explains, although he has kept the 9th Circuit apprised of his plans.

Government officials, both federal, state and local, have also been paying attention to his organization’s work and can make a big difference by setting up document storage, from the outset, in a manner that helps make it accessible to the public, he says.

The two biggest roadblocks to the full public access to legal materials that his organization seeks are pay walls and copyright claims. While materials such as statutes and municipal building codes belong to the people rather than the government and hence can’t be copyrighted, he says, incorrect claims that they are copyrighted and threats of litigation can be very intimidating.

To build consensus about what a Law.Gov Web page describes as core principles of public access, Law.Gov workshops have been held at law schools throughout the country.