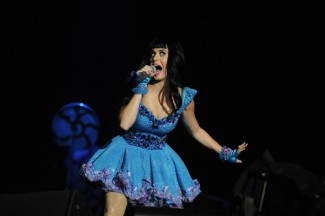 Lawyers for Katy Perry sent a cease-and-desist letter to a 3D printing company selling Left Shark, the uncoordinated costumed character who danced next to the singer during the Super Bowl.

Greenberg Traurig confirmed that its letter to the company, Shapeways, is authentic, CNN reports. The letter says Katy Perry owns the intellectual property associated with the shark image and has the exclusive right to display the copyrighted images. Gigaom, CNBC and the Los Angeles Times also covered the letter. Above the Law notes news coverage.

Shapeways complied and removed Left Shark from its catalog. According to its website, users can design a product with the help of a 3D printing app and upload it to Shapeways, which produces the product and sells it.

The designer who created the 3D model for Left Shark is Fernando Sosa, who typically creates 3D models with political themes. “It looks like dictators and world leaders like Putin and Kim Jong-un or Chris Christie are much easier to deal with,” Sosa told CNN. “All this lawyer crap is very stressful.”

Sosa told CNBC he offered to pay royalties to market Left Shark, but he was turned down. Sosa has since placed his design on Thingiverse, which requires the downloader to do the 3D printing, according to Gigaom. Sosa is offering the download for free.

The Los Angeles Times asked Santa Clara University law professor Eric Goldman to weigh in on the legal issues. He said an animal costume can be copyrighted if it’s not generic. There could be questions about ownership of the copyright if someone else designed the costume, and it wasn’t a work made for hire, or if the costume is based on an earlier work and the copyrights have entered the public domain.

Still unresolved, he said, is whether a company that offers 3D printing on demand can be liable for infringements of its users.